Staying on the Emotional Rollercoaster

(Wednesday 20th Septmember, Menorca) – In the three-cornered battle for the 2017 52 SUPER SERIES title, Harm Müller-Spreer’s Platoon crew fought back today to earn a very useful second place from the one, light-airs race at the Menorca 52 SUPER SERIES Sailing Week regatta, and close the gap very slightly on circuit leaders Azzurra and move a little further ahead of title challengers Quantum Racing, the 2016 circuit champions.

In essence, this one light-airs race mirrored, again, what has been seen prevailing often this season. Quantum Racing made an excellent start, led for most of the race, but were caught out on the last run when they, and Azzurra sailed into a hole. While Quantum Racing went from first to seventh on the leg, circuit leaders Azzurra gybed away earlier to rescue fourth. World champions Platoon started modestly and just sailed fast, but conservatively, reaping a nice gain down the last run to chase winners Bronenosec across the line for second place.

“It is still very open. It is so close. This place will be shifty all the time. It will be open until the very last days. Last time, we saw so many situations here before. We have led before into the last day and then lost half the fleet, even more. I am not sure that the story is over yet. We, every day, try our best, and the speed is good, our confidence is good, the team spirit is good. It is really good. Maybe we get a little bit of luck and we can win it, just maybe.”

The contrast with last year could not be more pronounced. Last year in Cascais, Quantum Racing had a margin of 68 points when they clinched the circuit title with two days to go. Today, there are six teams within 68 points of the lead, and the circuit title is still wide open. Azzurra’s lead into Thursday is now six points – double what they started the regatta with – over Platoon, and 13pts on Quantum Racing. 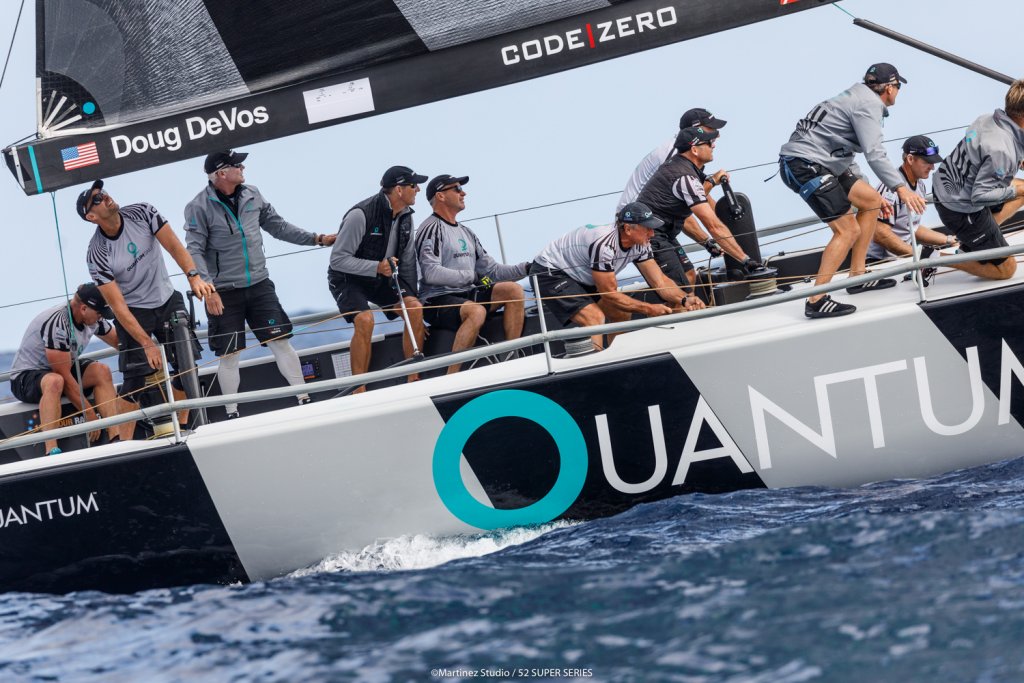 Quantum Racing are focussing on the task at hand – to close the points gap on Azzurra.

In the flighty, unsettled N’ly breezes and bumpy seas these were probably the most difficult racing conditions of the season. After starting in 8-10kts of breeze, the wind faded fast on the second round, thwarting any hopes of getting the regatta schedule back on target. Thankfully, a more stable, SE’ly breeze and flatter seas, with sunshine, are expected for the next three days, the climax of the season. 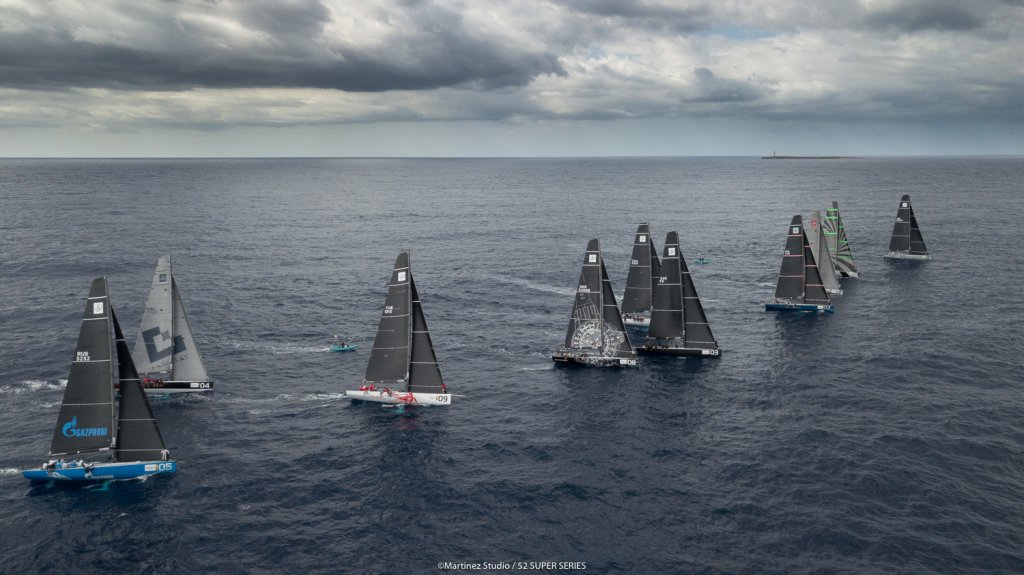 As all three of the title contenders lined up side by side on the start line, it was Quantum Racing who profited from the better starting speed and positioning, Azzurra tacking away early. Terry Hutchinson and Michele Ivaldi read the beat perfectly to have Quantum Racing lead Azzurra around the top mark first. They extended nicely down the run with good pace in the difficult conditions. They even seemed to profit from choosing the preferred leeward gate mark, the right side looking upwind set, which was set with some noticeable bias. Platoon chose the left, stayed left, and made a nice gain up the beat to get themselves back in touch with their rivals.

But as the breeze faded down the last run, Quantum Racing were snared on the left side while Francesco Bruni and Morgan Larson on Bronenosec contrived to read the best of the last run, gaining on the opposite side of the track to score the race win and move to fourth overall. Platoon took second, also gaining down the latter part of the run, while third for Gladiator sees Tony Langley’s team on the same points tally as regatta leaders Azzurra.

“We had had such a good race up to the moment we made that one mistake. We had done everything right. The start, first beat, first run, second beat, we had done it all right, we made that one mistake and it cost us six positions. That was a bit cruel. But I think this period of transition should be over. This next three days should be easier, with the SE’ly coming in, it should be steadier and it will be more predictable, less chaotic.

We still have potentially eight races, time enough to catch up. But for sure today was not on our side.” 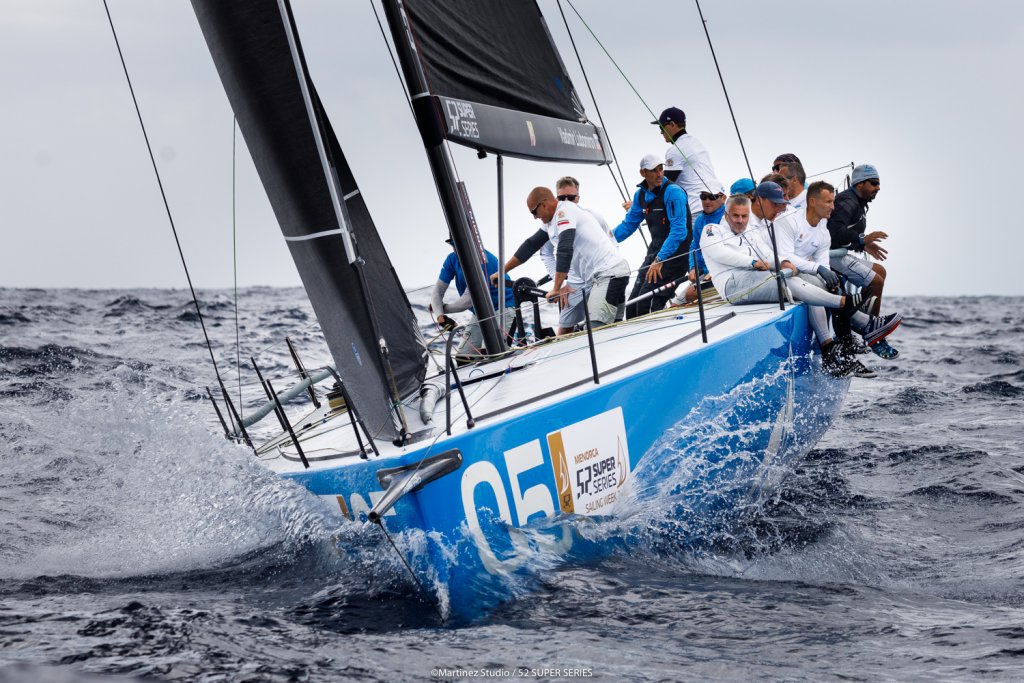 Bronenosec take the bullet from the only race sailed today.

Meantime it was a timely win for Bronenosec, patience paying for the Russian crew. Francesco Bruni recalled:

“We were in in the hunt for all of the race, sailing nicely not taking too many risks and then we saw that opportunity on the last run and we took it. Quantum and Azzurra sailed into a big hole and we gybed early, and made it, and so we had a lot of smiling, happy faces after the finish line, which is good for the Bronenosec team. This is great racing, the number one fleet in the world at the moment, a high level. The boats are so very close in performance. Some teams have an edge in some conditions, but not in others. You can always win a race; you can easily lose a race.

I am cheering for Azzurra, they are my old team and I really want them to win the Circuit. They are sailing very well and I hope they can keep it up.” 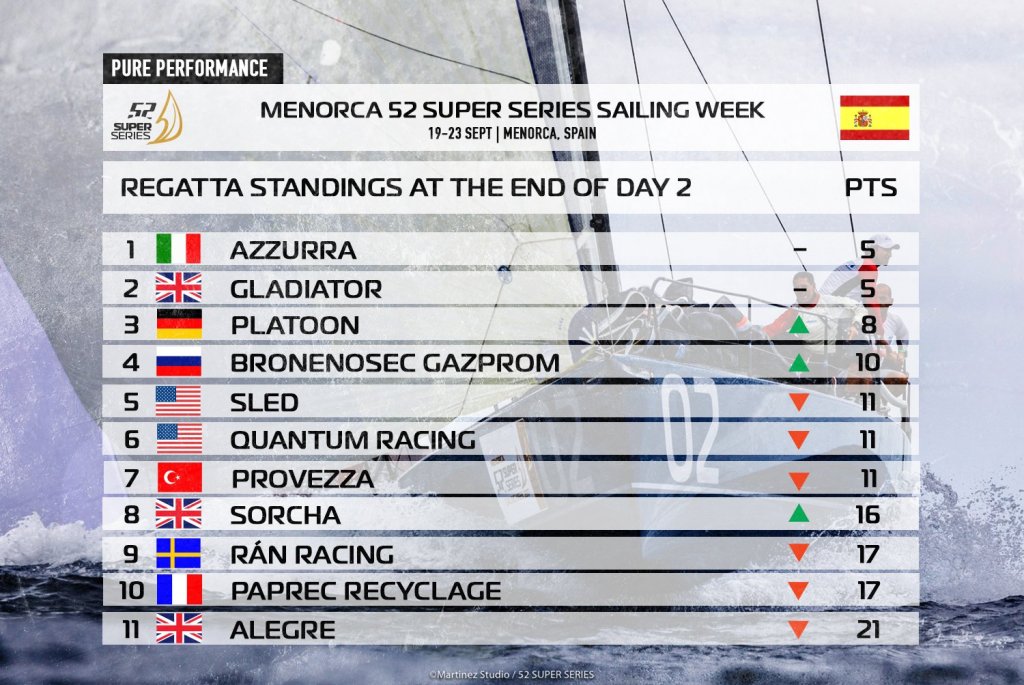