Sled on the Up, DeVos on the Quantum Racing helm.

(Tuesday 19 June, Zadar) – Adapting to the dynamic, changing breeze will be one of the fundamental skill requirements during the 52 SUPER SERIES Zadar Royal Cup, the second event of the 2018 52 SUPER SERIES. The race area out of the D-Marin Marina Dalmacija, south of Zadar is bordered only a few miles to the west by the island of Ugljan, and there are two different winds prevailing in the wider area.

Though the waters are mirror flat and smooth, the gusty, puffy breezes are hard to read and react to, requiring crews of the TP52s to change through the speed gears smartly. That was one of the key attributes that contributed to Takashi Okura’s Sled running away with the practice race, which actually saw the wind peak at a surprisingly brisk 20kts.

“We are doing such a good job of changing gears today and that was very much the key, to be able to change, to give ourselves options.”

“It will always be flat water here, really but it was windy today, and potentially we will see a bit of breeze here. We have not seen wind like that gusting to 20kts yet and so the conditions were amazing. Most of the teams I think were thinking it would be very light here and so today seeing that much breeze was great.”

Today Sled showed that they are in good shape, hoping to equal or improve on their third place in last month’s Sibenik 52 SUPER SERIES Sailing Week. Sticking to the adage of doing the simple things very well and also this being more rigid and disciplined in their processes have served them well so far.

“We are trying to have a few set procedures this season to be consistent. We think that is working quite well. Making sure we have a game plan is important.”

This will be the first 52 SUPER SERIES regatta this season for Doug DeVos, owner of Quantum Racing, and one of the founding stakeholders of the 52 SUPER SERIES. DeVos, as ever, is a bundle of positive energy – much of it stored up during his long lay off from sailing. DeVos has not stepped on a sailing boat since last September in Mahón, Menorca when he steered the previous Quantum Racing. Yesterday, Monday, was his first time ever on the new Quantum Racing that won the Sibenik 52 SUPER SERIES Sailing Week. Dean Barker moves to the strategist role.

“It does feel like I have been away, but I love being back on the water. But the boat is so well set-up, and the work is done to have everything in place. To a large extent I can come back in and you don’t have to work on too many things. You have to just find the groove. The boat does not feel that different, it is a little livelier, it accelerates a little quicker. The balance a little different but those things I can hardly determine, but some things they kind of tell me!” smiles DeVos.

“It is great to see Terry and Dean working together, they work in a smooth collaborative way. I really like the way Dean has just jumped in and it feels like he has been with us for a long time.

I am always nervous on the start line,” DeVos admits. “But we have all done it enough together. I trust the process and I have to do my job, which is to keep the boat going. Their job around me is to make sure we don’t hit anyone, not foul anyone, and to find our spot; and if our spot goes away, then we scramble from there. It is not the end of the race there on the start line so you have to ready to start chipping away.”

While the immediate horizons for DeVos are about maintaining the winning momentum established in Sibenik, on a long term basis the Quantum Racing team are setting the foundations for their America’s Cup bid with the New York YC’s American Magic.

“We are just organising ourselves from a management point of view right now, it is a start up business. Right now it is about how we are getting the money in place; about getting the right people in place. But it is something I have always wanted to do. I have always been fascinated by the America’s Cup. I remember my brother showing me magazine pictures of the America’s Cup boats in the seventies and since then it is something I have been fascinated by.”

Other changes through the 11-boat fleet include aboard Phoenix, where Tina Plattner steers her first 52 SUPER SERIES regatta. On Luna Rossa, navigator Francesco Mongelli is sidelined by an infected wound on his leg and is replaced by Luna Rossa’s Operations Manager, America’s Cup winner Matteo Plazzi; and on Tony Langley’s Gladiator where Hamish Pepper now sails as tactician, and Gladiator’s boat captain Feargal Finlay steps in as navigator. 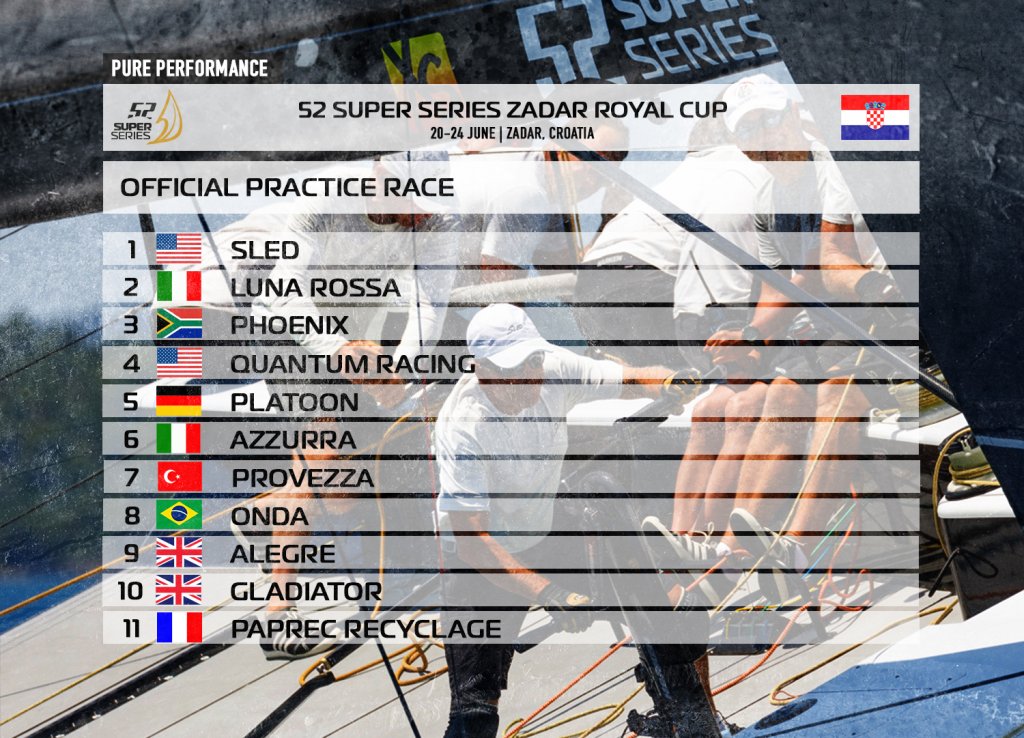