From second position today, Quantum Racing seized their opportunity when the breeze went light and funky in the lee off Cerboli island and in two short tacks were able to wriggle past the momentarily stricken Provezza to take the race lead. 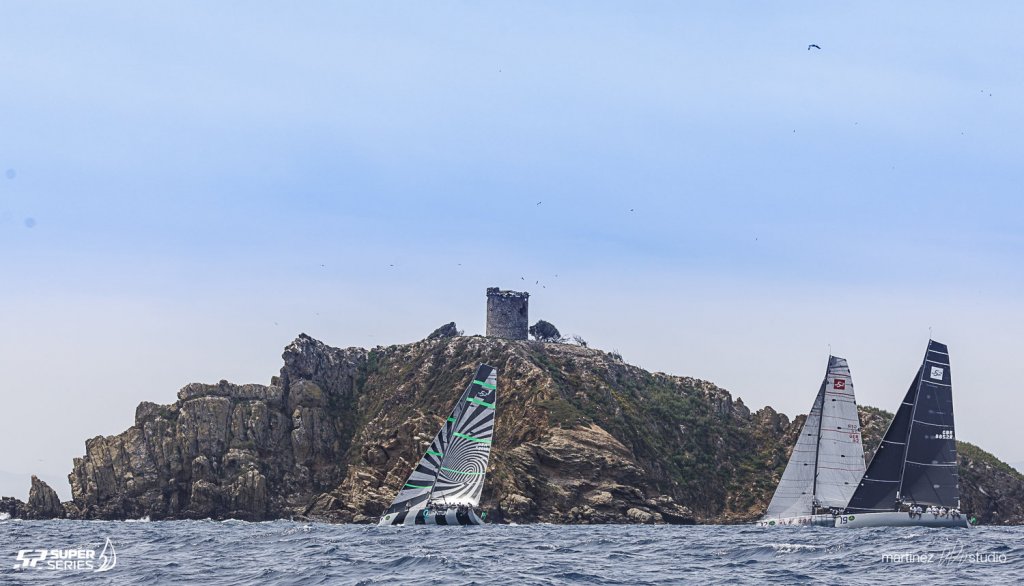 Ergin Imre’s team saw a hard-earned cushion of more than 220 metres suddenly evaporate when they led into the band of calm airs. Such is the peril of the pacemaker – inherently marking such problems – they could do nothing other than signal the opportunity to the chasing world champions. 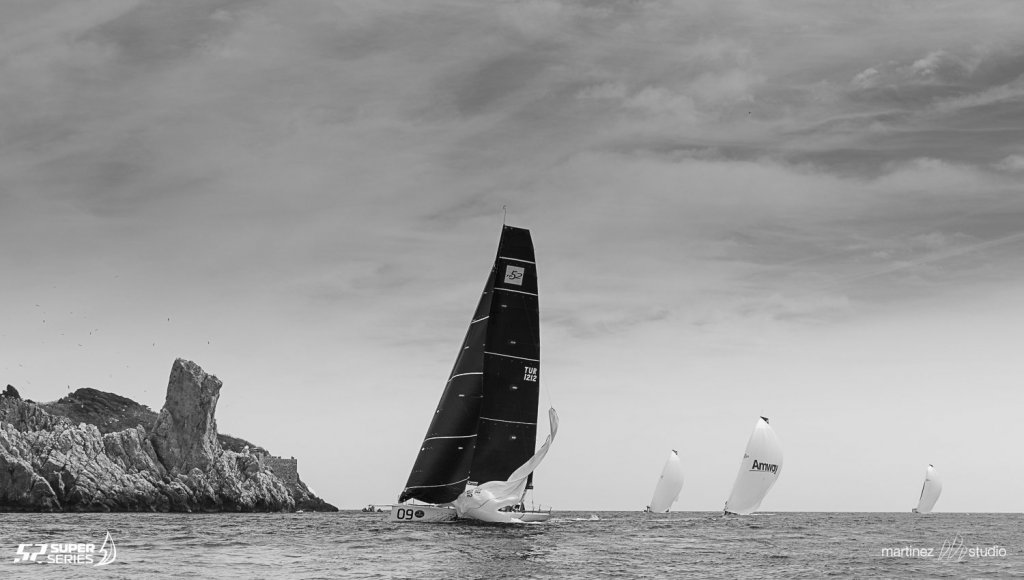 Predators, Quantum Racing, pounced on the stalled Provezza and sailed clear, latterly extending their lead to more than 400 metres by the finish line off the Marina di Scarlino.

But with ‘Scuderia Quantum’ teammates, Platoon, in second place at the line, the world champions are still two points behind going into the last two days of the Rolex TP52 World Championship Scarlino 2017. Andy Soriano’s Alegre took a well deserved third and so move up to third on the leaderboard, threatening to repeat their podium position they gained here last year.

For the first coastal race of the 2017 52 SUPER SERIES, conditions proved excellent even with a few opportunities available to upset the status quo. Most notable success was a sweet layline called by Platoon in the lifting left hand breeze on the long first beat up to Sparviero, the rocky islet off Punta Ala.

Sailing a lower, more direct lane they closed right up from fifth to second-placed Quantum Racing by the right turn. Spanish Olympic gold medallist and 2007 America’s Cup winner Jordi Calafat, the strategist and sail designer on Platoon revealed that their key move was inspired by memories of last year’s similar coastal.

“I remembered what happened to us on this leg last year when Bronenosec did more or less the same thing to us.” Calafat commented.

“It almost worked, but it was different this year from last year because it was windier this year, so there was less advantage for the leeward boats. The boats to weather could foot and gain quite a bit of speed, but we managed to overtake Alegre there, and was pretty good from there.”

Summarising what is contributing to the consistency of the world championship leading Platoon, Calafat continues:

“JK (John Kostecki) is very good especially when there’s traffic with his tactics, and I think that’s the key. He keeps Harm nice and cool so Harm is focused on sailing the boat fast all the time.” 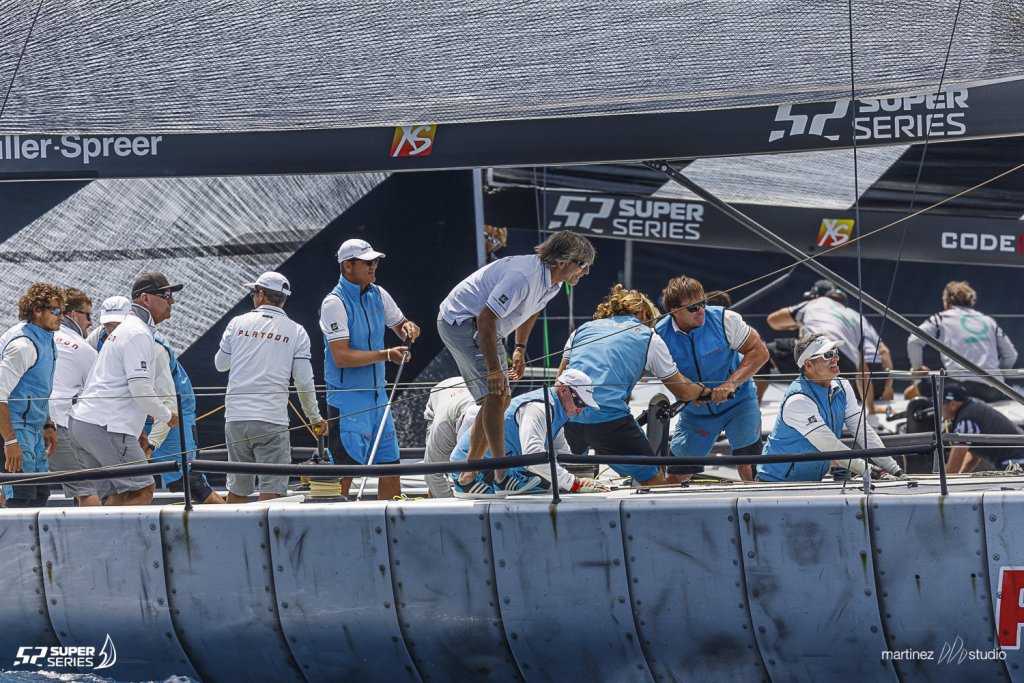 And, describing his own input Calafat concludes:

“I do a little bit of everything: about the sails, about the rig, about the wind, it’s a little of everything. I enjoy it quite a lot. I’ve never sailed with some of these guys before and it’s always good to sail with and learn from the best sailors and I think that’s the case here.”

On the first long beat up to Punta Ala, and downwind across to Cerboli, the southerly breeze peaked at 16-17kts at times but eased back again to less than ten knots during the final hour of the long, testing course.

“At the island, Cerboli, the whole fleet was getting tied in by the cliffs there, you could see it, and there was a little bit of return wind flow. Suddenly we were on port and we managed to drop the chute quickly, sail for 30 seconds on port, get our nose into the pressure line and that gave us a lane to get around Provezza. It was good to win, obviously we would have loved to get a few more points on our rivals, they had a great day too. But it is always good to win the coastal race, especially as navigator.”

“The coastal races remain something of a ‘Marmite’ discipline, both loved and hated throughout the fleet.” Moore chuckled. “We hate the coastal races, the stress of them is so much higher and just when you think you are winning then something happens. So it is great to win this one.”

Soriano’s Alegre are having a better regatta, back on the Tuscan archipelago arena where they finished second last year, now with Andy Horton calling tactics.

“This is my first time with the boat this week,” Horton said. “So I’m just getting to know everybody and meeting them all and learning the boat that we have and Andy the owner. I’m really impressed with all of them it’s a great group. So it’s pretty cool to meet a fresh group that’s really excited to go sailing and do everything right. Andy spends the time, he’s been here practicing. We did some little boat sailing before the 52 for two days, working out starting, hooking, pushing, all the moves that we do, and working on our vocabulary. It was awesome, it was very fun. That got us rolling as a team too for me to meet everybody. ‘Dog’ – Andrew Palfrey – planned that out. It was well thought out. We’re just chipping away and learning different styles of doing things and getting on the same page about it.”

Platoon have now scored four second places and just the one third from the five races sailed so far but have the world champions pressing them hard with two racing days still to be completed. Breezes are forecast to be stronger – up to 20kts – for Friday’s racing, remaining well within the favoured wind range of the Platoon. There is a nine point cushion between Quantum Racing and third placed Alegre, who in turn are just two up on Azzurra who finished sixth today. 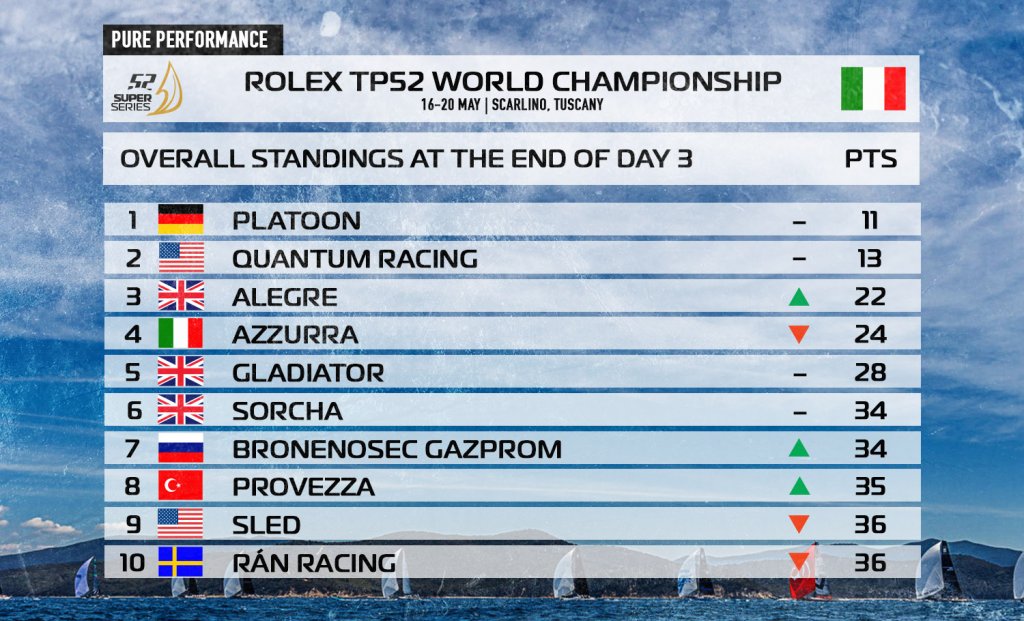