Niklas and Catherine Zennström’s Rán team finished third overall on the inaugural 52 SUPER SERIES last season, including a notable win in Palma at the Royal Regatta.
Across 2012 the crew also finished with two third places, in Valencia and Barcelona and a disappointing fourth in Sardinia. 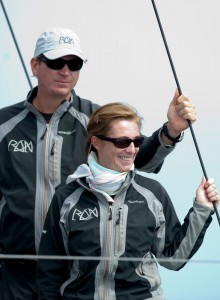 Again this year the Zennströms’ 52 programme runs concurrently with that of their very successful Mini-Maxi campaign. Their objective over the six 52 SUPER SERIES regattas is to finish their third season in the class with a higher overall finish by maintaining a more consistent scoreline over what is, of course, the longest season yet for the 52’s. But that is just one target for what must rank as one of the biggest and most ambitious private racing teams in the sport, for once again this is a Fastnet year and the team have ambitions to win the classic offshore race once again, as well as seeking to win the other offshore classics like the Giraglia and the Middle Sea Race.

Naturally there are pros and cons to such an ambitious, all encompassing two boats programme. The upside is that their extended crew are a very cohesive unit – an extended family – who become very tight over such a long, intensive season. That is reflected in the high level of confidence in each other as well as being able to roll easily and cleanly through the mechanical processes around the race course.

“We are really looking to be able to just carry on from where we were in September, to continue the good work we were doing together then and to do that we have to able to hit the ground running together as a team.” Asserts Adrian Stead, Rán’s tactician.
“You have to realise there are lot of points of the table at these first two regattas, one third are available by the tenth of March and so you have to be ready. We know, for example, that Azzurra have already been out sail testing in December, but then as a crew we did a lot of miles together offshore earlier in December and that all helps.”
Stead confirms.

“We did a lot of thinking about how to improve. You have to remember that if you only stand still in this fleet you are effectively going backwards because everyone is moving on all the time. We have made some technical changes to the boat and to the sailplan which we are confident will make a difference.”
“We analysed our weaknesses. The Botin designs definitely had an edge upwind and the trade off is they are slightly slower downwind. But with the smaller fleet we all inevitably race faster upwind because there are more lanes available. And Gladiator was superfast upwind and they have changed their fin and so that should redress the balance a little there.”

The only significant change to the crew line up on the TP52 is the arrival of Volvo Ocean Race winner Jules Salter who is actually undefeated as a previous MedCup champion navigator having raced in the fleet previously with Emirates Team New Zealand. He replaces Steve Hayles on the 52 whilst the British navigator has chosen to forego the 52 programme this season so that he can devote more time to GRIB.US the meteo business he shares with Marcel Van Trieste.

“Let us be clear that we would not be where we are with the 52 programme now were it not for Steve’s dedication and hard work. He is a tremendously talented navigator and, in his own right, a good tactician. But he has made the difficult choice to make more time for the business.”
“Jules and many of the crew go way back and so we think it should be a relatively straightforward transition as these things go. Jules sailed with Tim Powell and I away back in the days of the Tour Voile programme, whilst he and I sailed together more recently at Cowes Week last year on Powerplay.”
“Both Steve and Jules are good tacticians in their own right, and I am a confident navigator, good with the instruments, and that really helps in having respect in both directions.”
“Overall we are really just looking forwards to being back on the water together, getting back to where we were and moving forwards as a team together.”
Stead reveals that Rán have Thierry Peponnet as coach for both the 72 and the 52 programmes.
“We are really delighted to have him along, adding so much to what we do on the water and off.”
“And we all can’t wait to be back racing at Key West, racing in some different conditions. It can be quite choppy there compared to what we see in the Med. But it is a great place to go racing in January and Peter Craig and his team always do an excellent job of race management.”