A long, three race day on the water for the 52 SUPER SERIES fleet at Quantum Key West, sees a new regatta leader in Niklas Zennström’s Rán Racing. The world champions sailed a consistent day, improving on a fourth in the first race to post a first and a second, earning themselves a slender lead of a single point overall ahead of Azzurra which also composed a seven points aggregate today in the excellent 12-16kts NNW’ly breezes. 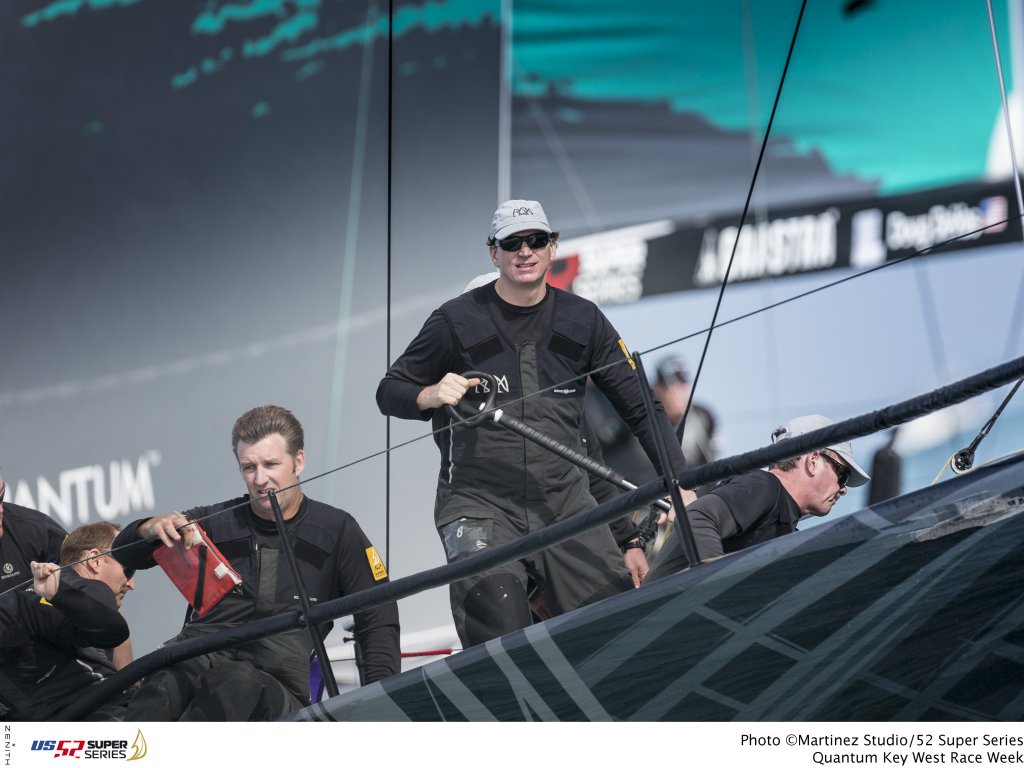 On the regatta rankings both Rán Racing and Azzurra vault ahead of Quantum Racing whose unbeaten record was halted when they hooked a lobster pot in the first race. The back down required to free themselves forced them back to a sixth place finish. They seemed unable to reach the same levels as the first two days of racing as they went on to a third and fourth.

But, just as the racing was often very tight with many place changes in the heat of battle in the shifting breezes which really kept the afterguards on their toes, so also the regatta standings after six races are very tight, only two points separating Doug DeVos’ Quantum Racing team in third from leaders Rán Racing.

In the fabulous conditions, around relatively short, sharp courses the intensity was always high. Lobster pots proved an issue again today as Quantum Racing, Azzurra and Hooligan in particular all suffered frustrating encounters which cost them places.

After a lacklustre opening to the regatta Interlodge tactician Andy Horton had laid out his hopes for the day on the dock in the morning, seeking to iron out some of the issues which had hobbled their chances so far. True to his word, the Interlodge team opened with a gun to gun win in the first race, extending after an excellent start and using their upwind speed edge. They backed up their win with a second and third to rank as the best scoring boat of the day. 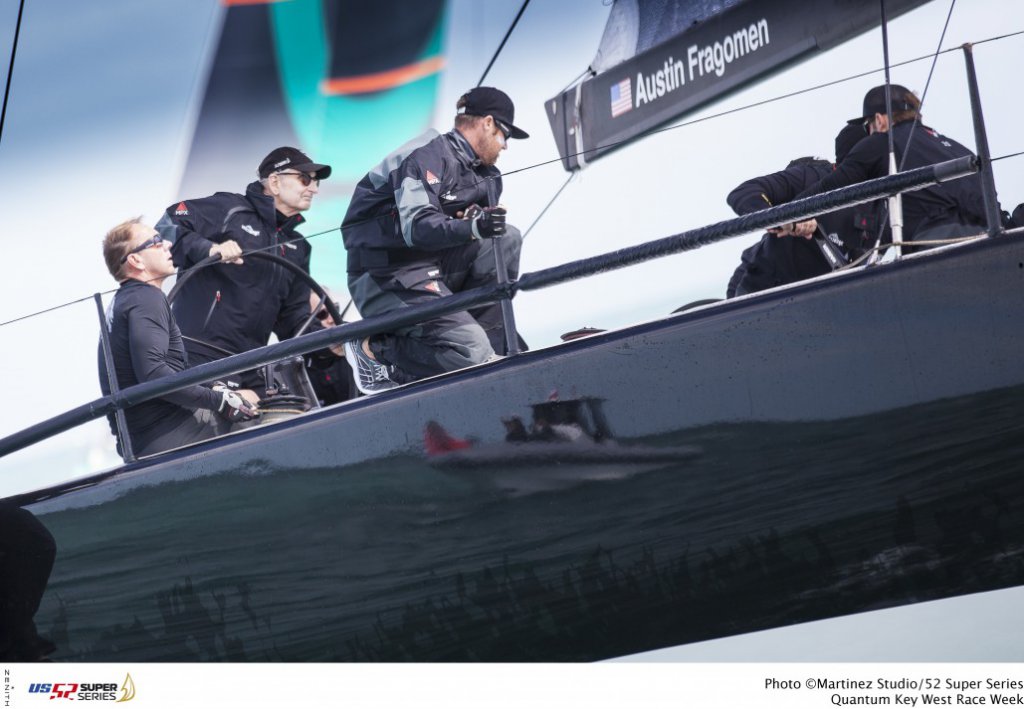 After Takashi Okura’s Sled lead early in the second contest, Rán Racing nailed a beneficial shift and extra pressure on the second half of the run which gave them a lead which they did not surrender to win their first race here. A head to head between Quantum Racing and Azzurra was nullified when the Italian flagged boat hooked a pot just as they were executing a lee bow move on the American boat. Azzurra came back and won the final race with Rán Racing just behind. 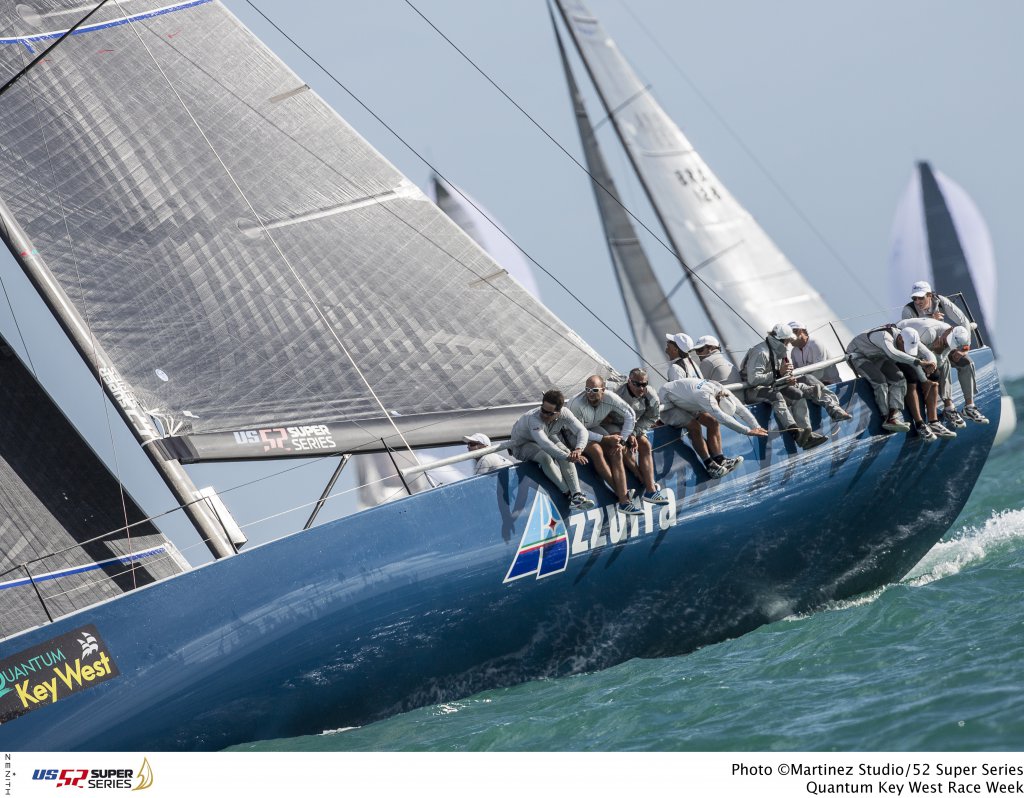 Niklas has done a good job of starting the boat in the first six races and we have worked on that and Thierry Peponnet our coach has been pushing us hard on our strategy and how we approach situations, at the start for example. There are different things, how strongly we want something, and then just the execution… .making the finesse to execute. It is all very well saying you want something but you have to execute. The standard of the fleet is so high.
Adrian Stead

All of the things we said we needed to get better on we did get better. We still have a long list to improve on as with every day in yacht racing but we hope we can keep this momentum going forwards.
The first race we made a good start, had a clean lane and just got away. We never really had to look back too much after that. Upwind in the flat water in these conditions we have a pretty good edge. We pay the price when it is lighter. Over these three races today we were a little quicker in the first race, a little closer in the second race – probably even – and in the third race even to a little slower as the wind was dropping all the day. In the second race we were more in the fray and had to wiggle through on the first beat to get second. Hopefully we can put another couple of days together like this one.
Andy Horton, USA, tactician Interlodge, USA

It was a good last race for us. It is a great race course, places changing the whole day. Unfortunately catching a pot in the second race probably cost us two places in the race, but overall we should be happy with the day. Here we have a hard and fast rule that someone is always looking out for pots, even during manoeuvres. The one we caught today was in a leebow tack on Quantum Racing and in that situation most of the crew are watching Quantum to execute the tack. And then we just hooked it when we executed the tack and then we found out about it when we could not build speed out of the tack. But it cost us probably 45-50 seconds.
Simon Fry, GBR, trimmer Azzurra ITA

It is not about going out and winning every race but having solid races and avoiding the fifths and sixths. The boats are very equal in these conditions. Typically we have been weaker upwind compared to the other boats, Azzurra and Quantum Racing and Interlodge but I think here this week we have managed to sail at good speeds upwind as well. The boats really so similar that it does come down to the best starts and the best tactical choices and boat handling.
Niklas Zennström, SWE, owner-driver Rán Racing

The breeze was a little shiftier than we expected it to be, especially in the later races. It was really up and down with big shifts. And we made a couple of mistakes which cost us. But the biggest disappointment was catching the lobster pot in the first race when we had to do a back down and we had to go from second in the race to last. That was just a little out of our control but that’s part of the deal racing here. But the rest of the time it was just shifty and some of the others just had a better day. We will just keep chipping away. There are four more races in the series left and we won the first three races of the regatta we just need to go out and win a couple more, the objective being to be in the hunt in the last race.
Tom Burnham, USA, strategist Quantum Racing, USA