Quantum Racing at the double

Ed Baird and the Quantum Racing Team put their renowned match race skills to best effect when they all but closed out regatta leaders Audi Azzurra Sailing Team on the start line of the final race of the Audi Sardinia Cup, and so despatched the home favourites to a difficult fate.

Going on to take a final winning gun by a comfortable margin, the programme which won the 2011 TP52 World Championships on these same Costa Smeralda waters secured their second successive trophy regatta win on the 52 SuperSeries. 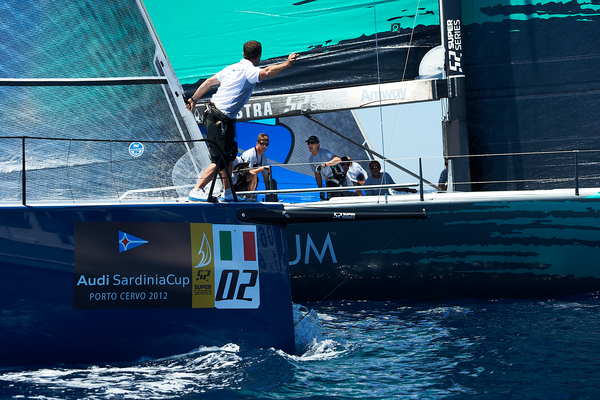 The one key move, in the final 20 seconds before the start of the one and only race today, shutting the door at the busy, sought after committee boat end of the start line, was typically assured by multiple world match race and America’s Cup winning Baird and a crew which has been bolstered this season by several of Baird’s past match racing teams, with a view to delivering in just such ‘must win’ situations.

On the very right sided course in a modest sea breeze there was, unfortunately, no way back for the iconic Azzurra team which started the final race with a lead of just one point over Quantum Racing.

The French team on Paprec Recyclage, lead to the windward mark today ahead of Quantum, but acceded to the champions on the first downwind. But Stephan Neve and his team took great pleasure in their second place finish, atoning somewhat for their error on the coastal race.

But without doubt the French crew have proven conclusively that the IRC optimised boats with a largely amateur crew – some of whom have sailed together for more than 10 years – can be very competitive in this 52 SuperSeries fleet on a relatively modest budget on the boat which won the 2007 world championships in its launch year. They, and Peter Cunningham’s PowerPlay were always in the mix.

Costa Smeralda has again proven a happy hunting ground for Gladiator, the British flagged crew of Tony Langley. They finished third overall for the regatta, only once scoring in the lower half of the fleet.

Today was good, over the last couple of years as a team, in situations when they have had to have their best race they have done it. Today was a day when we needed our driver to take control of the race from the very beginning and Ed did an amazing job. Fifteen seconds after the start I was thinking it looked good for us, it would be difficult for Azzurra to get back. It was a little bit of a one sided race track, you don’t want to be in the position Ed put them in, but we’ll take it. Every time we have sailed there you have to hit that right side. To me the hardest thing in sailing is to win the boat when you have to win the boat. It was a tough situation. Everybody wanted, it was pretty impressive, Ed just went in there and took it.

We have won two regattas but we are still almost tied. It is going to be nerve racking all season long. The Azzurra guys are so good. In tight situations there was a couple times this week where we thought they’re done, we’ve got them’ they just got out of it and came back. Today they understood it too, they were fighting for the same spot that Ed was and Ed took control of it and that was the race.

You have Juan Vila, Warwick Fleury, Lorenzo Mazza, Andy, Tommy Burnham who have sailed match racing with Ed before, we kind of configured the team a little bit around that, with some real strengths, knowing that with not so many boats, at some times it could come down to that, if we needed to beat one boat we could do it.
Ed Reynolds (USA) Team director Quantum Racing (USA)

To be polite I’d have to say we are disappointed. I am sure we will debrief it, but the start did not go as we wanted. I am not sure if the geometry was not what we thought, or if there was a little more current pushing us on, from a call of them not being able to shut the door on us, to he could definitely shut the door on us, so then we were on the back foot on a right hand race track. I think possibly you would say we could have tacked under them and then would have been at no risk, an even start, and if you are still in it at the weather mark you can fight on, so maybe a little bit of a risk management lesson. Over the period we have learned a lot about sailing the boat in the light, but now we are going back to Palma, where the boat lives and we have all sailed a lot, so here is hoping!
Simon Fry (GBR), trimmer Audi Azzurra Sailing Team (ITA)

Third overall for us, I think we are all going away pretty happy with what has happened this week. Luckily we have had some light air which has been good for the boat, we did pretty well, we stayed consistent and had good finishes. We had one bad race which was pretty much my fault. But in general, everyone did a really good job, we are coming together more and more as a team as time passes.

There was no way back today from an OCS today, it was a shame really. We thought we were OK but we were called and there was not way back on a right hand race track.

We are disappointed with the result here, but in terms of the way we are sailing the boat as a group we have made big strides forward in the light. And we have certainly made big steps forwards in conditions which we considered to be our weak spot. So, onwards to Palma. We just need to finesse what we have been working on, and in fact we were probably going the best we have in those conditions yet.
Ado Stead (GBR) tactician RAN (GBR)