Powering up on the 52 SUPER SERIES

Peter Cunningham is the owner-skipper of the PowerPlay crew which makes their 52 SUPER SERIES debut this week on the Reichel-Pugh design which was originally the regatta winning USA-17.

Cunningham, who lives in the Cayman Islands and has done most of his sailing in the USA, decided just over a year ago that the TP52 was the challenge he wanted and set about creating a programme which races hard, but which likes to enjoy themselves together. Their secret weapon, Cunningham reveals, is the on board stereo system which keeps the crew in the right mood! 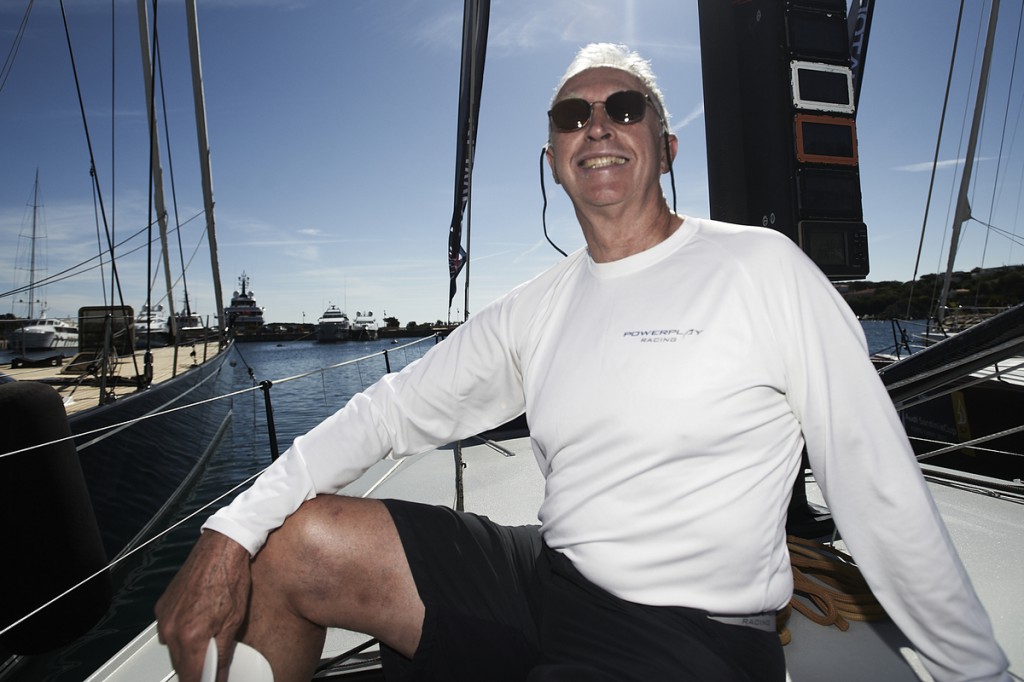 They have optimised PowerPlay over the winter months and have already proven competitive this season, but this is their first acid test in Europe:

We were second to Quantum in Key West, we were first in St Thomas and tied for second in St Bart’s third on countback. Our boat does not go as well when it is light and choppy, but when the wind gets up a little bit, it goes very, very well.
It is exactly a year since we started sailing her, last June at Block Island Race Week, and that was with the old sails, rigging and keel. And so over more than six months we have changed the sails, changed the keel, changed the rigging. Each time we have had something new with the boat, in its proper condition.

And the boat feels better than ever in its newest mode?

For me it is now better balanced. It feels quieter. There used to be a fair bit of noise off the leeward wake. Now it is quieter, the trim is different and changing the keel has made the difference. And we have worked on the rig, the whole thing has changed as the guys have learned. I think it is only these last few months that we have been going better. We used to lose to Vesper (2008 Quantum Racing) easily. At Key West we were second and they were fourth. And we felt we were competitive with them and Quantum we beat them boat for boat, another we were overlapped. And they are a very well sailed boat, Vesper and Quantum we considered to be the benchmarks.

Cunnigham provides an insight into what their team is about, the ethos which underpins their programme:

The name of the boat is PowerPlay – Power we want to be competitive and Play we want to have fun. So I met Tony Rey, before that I had always sailed small boats J22’s and J24’s and in 2010 I sold my company and thought I’d like to do some big boat series stuff that I had never done.

And he explains how and why the team came about:

Tony came down to the Cayman Islands and I explained: I used to play rugby – I played until I was 35 for a team called Fagin’s – an Imperial College old boys team – it was a very good team, but we sang, we drank and had a really good team. I said I wanted to have team, but a team which has fun, not crazy, and is compatible. I hate politics on board, I did not have it in my company – people trying to score off each other. So Tony listened and we put together a team. We all really have a good time, get on well and we try very hard. We are disappointed to lose but get off and congratulate the other team.

And the music programme?

My main contribution is to have a stereo on board. They said: you can’t do that it weighs too much. So Dusty went down to Best Buy with a pair of scales and made them open all of the stereos and he weighed them to get the lightest. So I think it makes a difference. All the other boats go out looking serious, we have a system where anybody can put there iPod on, they can select the music.
I think that breaks the tension. We play a lot of Bob Marley, lots of reggae, CT has been bringing a lot of stuff, anything goes – though we don’t have much classical.

But that mood music does not disguise the fact they are a team who want to win, just as much as any other team in Porto Cervo this week:

The PowerPlay owner is no stranger to breezy venues and cut his teeth in smaller boats:

I sailed for 18 years on San Francisco Bay and there is 25 knots in the summer every afternoon, and so I am used to sailing in a lot of wind and then during the winter there it is very light. It is a beautiful place.
I live in the Cayman Islands, it is a small island of 50,000 people, warm water you have a trade wind every day, for sailing small boats it is great. We sail J22’s there. For catamarans, dinghies and small boats it is beautiful, 12-18kts trade winds and a slight chop.

His early sailing life was in England, on the Crouch river at Burnham:

I started with my wife, her sister and brother in law were commodores of the Royal Burnham YC at Burnham on Crouch where we went to sail on RB One Designs there, and then did some chartering, five or six Antigua race weeks, a number of other race weeks. And then mainly the J29 sailing in San Francisco, we had probably the most raced boat on San Francisco Bay. It was the right size, with seven or eight people on board. I don’t like boats with 20 people on board or more, you lose the connectivity with everyone. Fifteen is a good number.

Selling his business a couple of years ago has freed up the time to enjoy his sailing programme:

I had a web based information services company, which basically helped companies sell to the US government and I was in the technology business for 25 years in California. I am 71 years old and if I was 20 years younger I would not have sold it, it is not something I wanted to do for the rest of my life. But the company has nearly doubled in size since I sold it in two years, they are very happy and I am very happy.