(Friday 20th July, Cascais) – Quantum Racing carry a seven-point lead into the final day of the Rolex TP52 World Championship off Cascais, to all intents and purposes a relatively healthy margin, even with the expectation of two breezy last races for a nine-boat fleet.

But Terry Hutchinson, the US-flagged five-time world champions’ hard-driving leader reaffirms, once again, that no margin can be considered secure, particularly given the strong-breeze, big-wave conditions, and the strength and depth of the competition.

“No lead is comfortable. Never.” Emphasises Hutchinson, strongly. “We need to go out and apply the same focus and determination. We were two points off the lead going into the last race [of the Rolex TP52 World Championship 2017] and so the memory is still there of what we need to do and how we need to execute. We don’t need to change our game plan and how we are sailing. The guys have the boat going really well, and so it is a matter of making sure that our boat handling is consistent and we hike like there is no tomorrow!”

With the NW’ly breeze building to gust close to 30kts, there were big gains and losses made over one of the most exhilarating days of racing for the TP52 class in recent years. Quantum Racing retuned a six-point aggregate for the day, going 5,1 from the racecourse, as did the Roemmers’ family’s Azzurra, sailing 1,5.

Best scoreline today was that of owner-driver Takashi Okura, and the Sled team, whose 2,3 scoring included the outcome of a spectacular five-place – from eighth to third – 300-metre gain on the first run of the second race.

In the first race, it was Azzurra that exploited the pin end favour to break up the early left and establish a very healthy lead around the first windward mark ahead of Sled. Luna Rossa made consistent gains during the race, rising from fifth to third.

The NW’ly wind was at a brisk 22-23kts on the start line for the second race. With Quantum Racing’s Dean Barker showing considerable skill and poise to hold onto a very slender lane off the line, sandwiched between Luna Rossa and Platoon, which they then turned into an advantage as the fleet later tacked onto port, and Quantum Racing gained leverage as the leftmost boat. Quantum Racing led Luna Rossa around the top mark with Provezza third.

Platoon, by gybing early and going down the left of the run, made a huge gain to actually lead very narrowly through the leeward gate, making more than 150 metres back on Quantum Racing.   But Quantum Racing chose the right hand mark, looking upwind, and were able to get to Platoon and punish them with a series of tacks as the pair converged progressively with the starboard tack lay line.

Quantum Racing took the win, their third of this Rolex TP5 World Championship, with Platoon second and Sled just nipping across the finish ahead of the fast charging Luna Rossa. With two races scheduled Saturday, Quantum Racing lead into the final day with a seven-point lead over Azzurra, with Sled in third, 11pts behind the leader, and presently on course for their third consecutive podium at the three regattas so for of the 2018 52 SUPER SERIES. 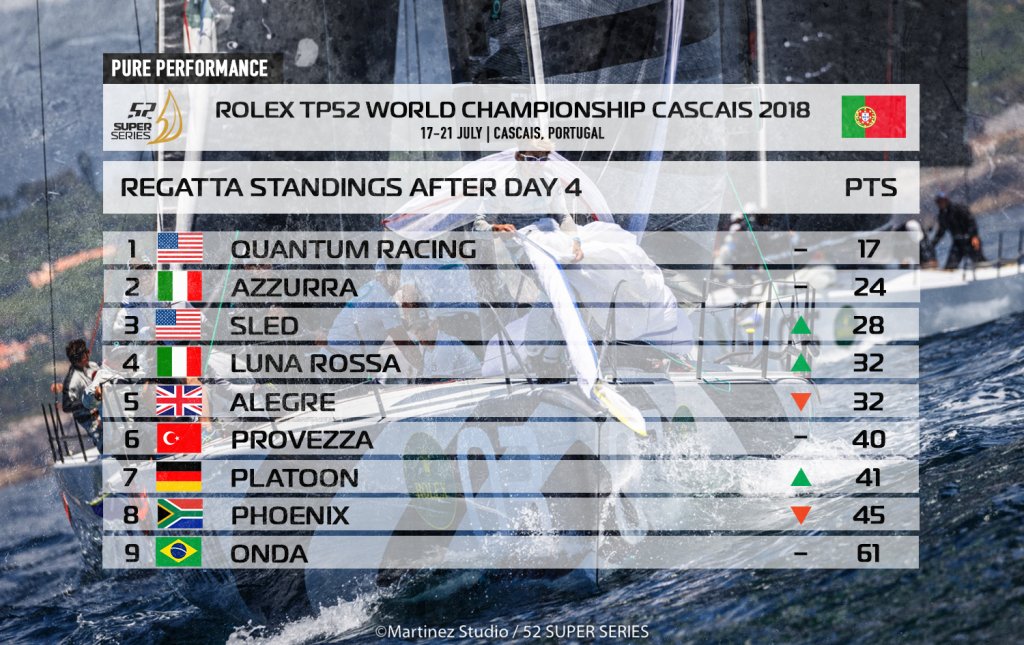 “A great day for us with a second and a third, so we’re stoked! Mr. Okura did a great job in very trying conditions, I think he was using all his strength to get the boat around the course today and he got rewarded for working extremely hard. We had an incredible comeback in the second race from last to 3rd, that’s been our race of the regatta, and to do it in 25knots, the team is very pleased… we’re pumped!

“We’re very pleased. To be just over halfway and be in 2nd place – it’s better than we expected! We’re still getting better, but we’re very happy with where we’re at. We’ve had some lucky breaks along the way and we know how things can change pretty quickly so we’ll just keep our processes going, good debriefs and we have a fantastic crew so we’re not wishing for anything, just have to keep the momentum going!”

“There is obviously a nice advantage to the pro driving. Deano is doing a nice job, certainly in these conditions, it’s very challenging. And we’re seeing a very polished team at the top of their game and their putting points on the fleet quite comfortably at the moment.”

How does the team approach a windy regatta differently than a light air one?

To finish first, first you have to finish. That’s one. So you have to take care of all the gear, but also you have to push the boat a little bit harder. It’s more physical, obviously, and looks from afar like a Melges, but you have to realise that a 50-footer is pretty heavy! Today was a good day for us, we could have had a 2nd, but we made a slight mistake, but we are still pushing for the podium and we can make it happen.

Do you focus on individual regattas, or the entire series?

I’m not sure about the overall goals. For the big plan you have to ask Vasco!

It’s hard to communicate in breeze, without the comms system of the Cup you need to be smart with the words you use and to pass big amounts of information. The better we are, the less communication we have onboard.