Jamie Haines is the only female crew working forward of the helm in the 52 SUPER SERIES, but this is no matter.

This 33-year old native to Newport, USA comes from a long heritage of offshore sailors, and so has salt water in her veins. Her grandfather Jim Kilroy was an American racing legend, having owned and sailed all the famous Maxi boats named Kialoa, which in the 1970’s to the ‘90’s raced nearly every major ocean race in the world. Even as a small child she was brought aboard during the training sessions, so being in the mechanically and physically-demanding Pit position on board Interlodge is no problem for her.

I enjoy being here on this team, its very different than other women’s sailing that I’ve done. Usually on big boats the only woman aboard is small to fit into the available weight niche left to get one more person on board. But here my role demands strength and timing that would be hard from someone who is only 69 kg.
Jamie Haines, Pit, Interlodge

And with Jamie there’s more than just the crew work: she is a highly-experienced rigger, having worked with the Blew Stoub rigging team to get Team Pindar around the world, among many other projects. She designed all the rigging systems on board Interlodge from when the boat was built at Longitud Cero in Spain in 2010, and is responsible for keeping everything in running order.

When something goes BANG, I’m the one who has to respond [she laughs] Jamie Haines, Pit, Interlodge 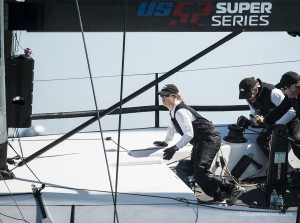 But her extensive big boat experience has not limited her to this kind of sailing: in 2009 she was an aspiring Olympian with skipper Jenny Tulloch on US Sailing Team AlphaGraphics in their quest to represent the USA in the Women’s Match Racing discipline on the Elliott 6M’s. That campaign brought them around the world to compete in numerous match race championships where the pressure is on to perform in every match.

But her real passion still lies out on the open sea: she wants to do the Volvo Ocean Race, where the SCA women’s team is being formed for the next race in 2014-15.

I feel in some ways I’ve missed a wave for women’s offshore sailing that crested a few years ago
Jamie Haines, Pit, Interlodge

Of course there have been some in the solo-sailing part of the sport, but it’s very difficult to find funding for that here in the US, and in my view some solo sailors are more adventurers than racers.
Jamie Haines, Pit, Interlodge

By being in the top of the game here in the 52 Super Series, there’s no doubt that Jamie is a racer, but she still needs to find some leads to get her on to the SCA Volvo team.

Hopefully what we do this week in the Super Series will help [she says with confidence] Jamie Haines, Pit, Interlodge