The four regattas in Europe which constitute the series, Capri, Costa Smeralda Sardinia, Palma and Ibiza will be known as the ” Barclays 52 SUPER SERIES “ 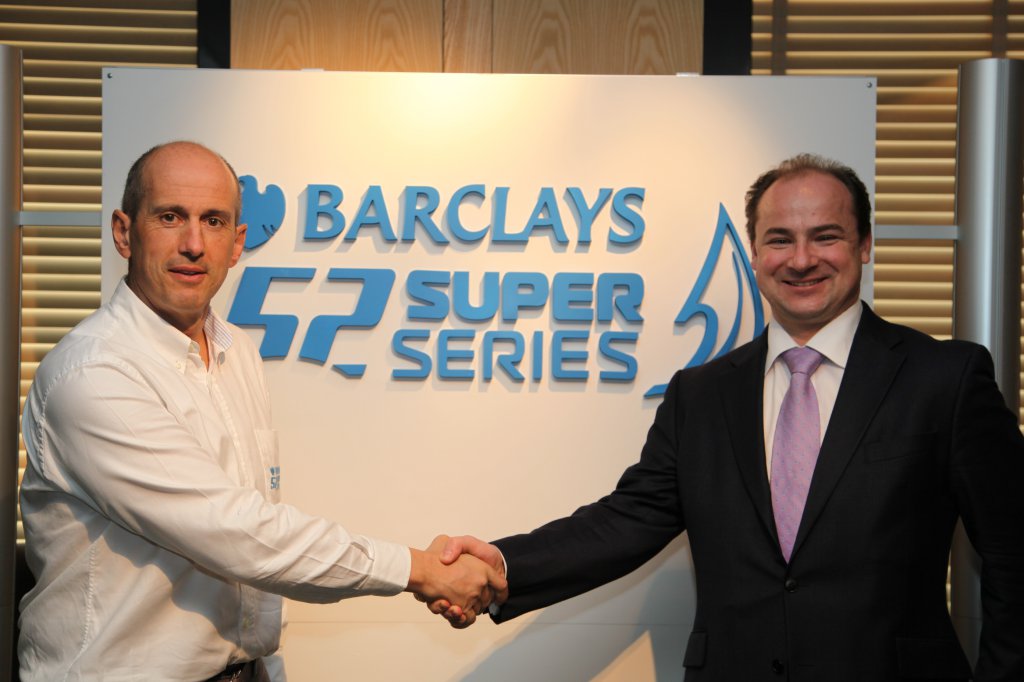 Barclays and the 52 SUPER SERIES have signed an agreement which will see the bank become the naming rights sponsors for the 2014 season in Europe.
The alliance was confirmed at a press conference in Madrid, Spain this morning (Wednesday 26th Feb) hosted by Agustin Zulueta, CEO of the 52 SUPER SERIES, Benedek Vasy, Director of Marketing Strategy of Retail Banking for Barclays in Europe.
Since the 52 SUPER SERIES was launched at the start of the 2012 season, it has gone from strength to strength. It continues to represent the best grand prix monohull racing series in the world drawing some of the best professional sailors in the world including America’s Cup winners, Olympic medallists, round the world race victors.

It is important to note that Barclays 52 SUPER SERIES now has realised a strong and passionate following with more boats racing than when the preceding MedCup was in force. Considering the global economic environment that is a very satisfying platform to build from.
Comments Agustin Zulueta (ESP), CEO of the 52 SUPER SERIES.

Barclays sponsorship.
Retail banking in the Premier Customer segment is a key focus for Barclays in Europe.

This sponsorship demonstrates the clear commitment of Barclays Group to its business in Spain and throughout Europe.
Benedek Vasy highlighted.

Reflecting their target to become the benchmark bank for Premier customers in Spain, Italy, France and Portugal, the group have elected to support the major European circuit which embraces a wide pan-European appeal – owners, skippers and crews come from the UK, Ireland, Spain, Italy, France, Sweden, Germany, Holland, Portugal as well as outside Europe – whilst also at the same time the circuit and class reflect a clearly defined ‘premier, upmarket’ profile.

The 52 SUPER SERIES aligns perfectly with our purpose and our values ​​as a company.
Barclays’ Benedek continues,
It is a competition circuit of the highest level which absolutely requires and defines the uncompromising pursuit of excellence in each race and at every regatta from the crew on board, from their technical support and their organisation. It combines the best in traditional monhull racing with the latest in high technology these boats reflect our DNA as a company – as we have a history stretching back 300 years but we are a company which is constantly looking to innovate.

And just as with the Barclays Premier League or the ATP Tennis Finals tournaments which we collaborate with we want our relationship to go beyond the financial sponsorship of the racing,
Vasy emphasises.

Through this sponsorship, Barclays aim to recognize and reward their Premier customers in Europe. Through the Barclays Premier Club which delivers offers and benefits, customers can enjoy the very best of the lifestyle and unique sporting experiences at major events: guided tours of the participating race boats, watching racing on the water on spectator boats, drinks receptions and invitations to exclusive events.

We are the only bank with a simultaneous presence in the Premier segment in Spain, Italy, France , Portugal and the UK , so we want our Premier customers to enjoy this truly unique experience in Europe. We not only want to help them achieve their financial goals , but also their ambitions in their personal life affording access to benefits and experiences which they just cannot get anywhere else.
says Barclays’ Benedek Vasy.

Commenting on the agreement with Barclays, Agustín Zulueta concludes:

This is a significant boost in the pursuit of to our goal which is to consolidate the future of the best monohull racing circuit in the world. This is a key choice for Barclays because the Barclays 52 SUPER SERIES is a competition circuit which reflects ‘pure performance’ featuring grand prix boats of the same class racing in real time. The support and passion of three of the most respected owners and sailors in the world, Doug DeVos, Niklas Zennström and Alberto Roemmers ensures continuity and sound financial foundations of the circuit and now, Barclays add the perfect balance to this mix.

The Barclays 52 SUPER SERIES 2014 is a calendar of four European regattas. They complement the US 52 SUPER SERIES which comprise Quantum Key West regatta which took place January in Key West ( USA) and is followed by a regatta in Miami 5th to 9th March.
After the Miami regatta , which begins on March 5 , the competition will move to Europe , where four regattas are contested, two in Italy and two in Spain :