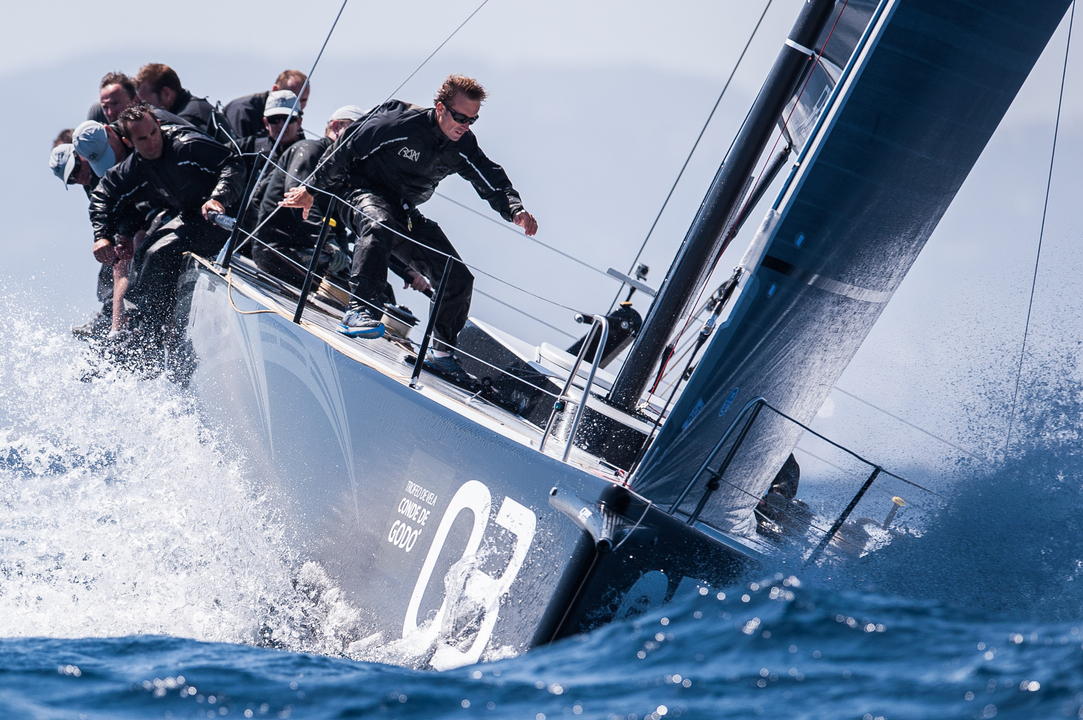 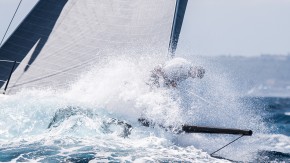 Indeed the American team got the better of Azzurra on the final run today, inflicting a small but perhaps telling psychological blow when they wrestled second place on the last gybe of the at the end of a fabulous, high speed duel which had raged back and forth from the last windward turn.

Winning the first race of the day with a significant margin over Austin Fragomen’s Interlodge, Azzurra looked to have gained control of Quantum Racing during the first beat of the second race and were set to consolidate their three points lead. But it went to the wire though, with the two gybing side by side for the finish line.

While Quantum Racing accelerated smoothly out of their turn, Azzurra stalled momentarily and could only make third.

After seven races Azzurra go into the final day of racing with two points in hand over Quantum Racing with Niklas Zennström’s Rán Racing in third, a further two points behind. Up to two races might be sailed Sunday.

Although Quantum Racing completed a solid day, returning a third and second, from the outside they appeared to make it more difficult than they wanted it to be. In both races they were, again, forced to be climbing up the fleet rather than getting into a position to be challenging for the lead at the first mark.

Immediately after the first start today they had to sail clear to take a penalty turn. In the second, Race 7, they made a well timed, fast start while Azzurra – this time – appeared to struggle off the line. But it was almost as if a magnetic field drew the two top boats together again and they locked horns with Azzurra from the middle of the first beat. 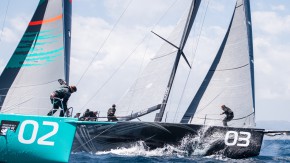 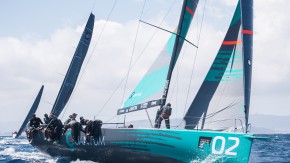 Little communications on the starting line got us in difficulties. You don’t have to make much of a mistake to be put into a position where you can’t execute your game plan. In this fleet the most critical thing is to set yourself up to win the first cross and you have to do a lot of things in a very short space of time perfectly for that to happen.
evaluated Ed Reynolds, Quantum Racing’s team director

In the strong, 18-22kts winds the pressure on the crews was relentless and the action intense. Rán Racing, world champions, are four points off the lead after their slightly inconsistent day pairing their win to a fifth in the first race. They could not match Azzurra’s early speed and then compounded their problems when they skiffed the top mark last time up and had to take a penalty.

Two races are scheduled to be sailed, weather permitting on Sunday, Azzurra needing to keep up their same level of consistency to be sure of burying their Barcelona hoodoo and winning in the Catalan capital.

We definitely knew that it was going to be tough and that we have to fight metre by metre for each race from now to September so we are prepared for that. Today in the first race Tommy (Tomislav Basic, starting helm) got us a very good start, we had the boat going quickly and that allowed us to sail clean and then once we were clear we just let the boat do the job and we were quick. In the second one we did not have a great start. I think it was a little bit of bad timing. And from there we are not in control of our own destiny. We had to fight, we managed to get up to second on the last run, but we made a small mistake on the finish line. We gybed with too little speed and that let Quantum through. Overall it is very tight, we were still the best boat of the day and extended our lead by one point.
Guillermo Parada (ARG) skipper-helm Azzurra (ITA)

We should have won a championship for the most boats passed. In the second race we got a pretty decent start, it didn’t work out for us in the middle of the course but then we went from fifth up to second in the next three legs, the guys are sailing brilliantly around the course but I think just the communication and terminology, these are some of the things when decisions have to be made so quickly, these are things we are still working through. But I like watching them sail around the course they are pretty strong.

I think Azzurra are great sailboat racers they have the same philosophy, to win the first cross. It seems at every event you go into the last day with these guys on virutally equal points so anyone can win the regatta. We really want to win this event.
Ed Reynolds (USA) team director Quantum Racing (USA)

I was very disappointed with the first race, we got a good start and just seemed to drop out of the game really, scrapping for fifth place. I dont think we had the boat quite well set up, we got ourselves into a bit of a bad lane and Azzurra put about seven to eight boat lengths on us really quickly then unfortunately we just clipped the top mark and had to do a penalty turn and dropped back to fifth at the finish.

I think we are the opportunist boat, four points off Azzurra and two off Quantum, we know we gave some points away today but we are still in with a shout.
Adrian Stead (GBR) tactician Rán Racing (SWE)