Azzurra On the Cusp of Miami Royal Cup Win?

(Friday 10th March, Miami) – Azzurra carry a ten points lead into the final day of the Miami Royal Cup and are looking to reprise their last 52 SUPER SERIES regatta title when they won the last event of 2016, the EGNOS Cascais Cup.

In light winds off Miami Beach the emblematic Italian team which is skippered by Guillermo Parada with Vasco Vascotto as tactician won their third race from five starts before posting an eighth and breaking an otherwise impeccable string of first and second places, to lie comfortably ahead of Ergin Imre’s Provezza super consistent Provezza crew. 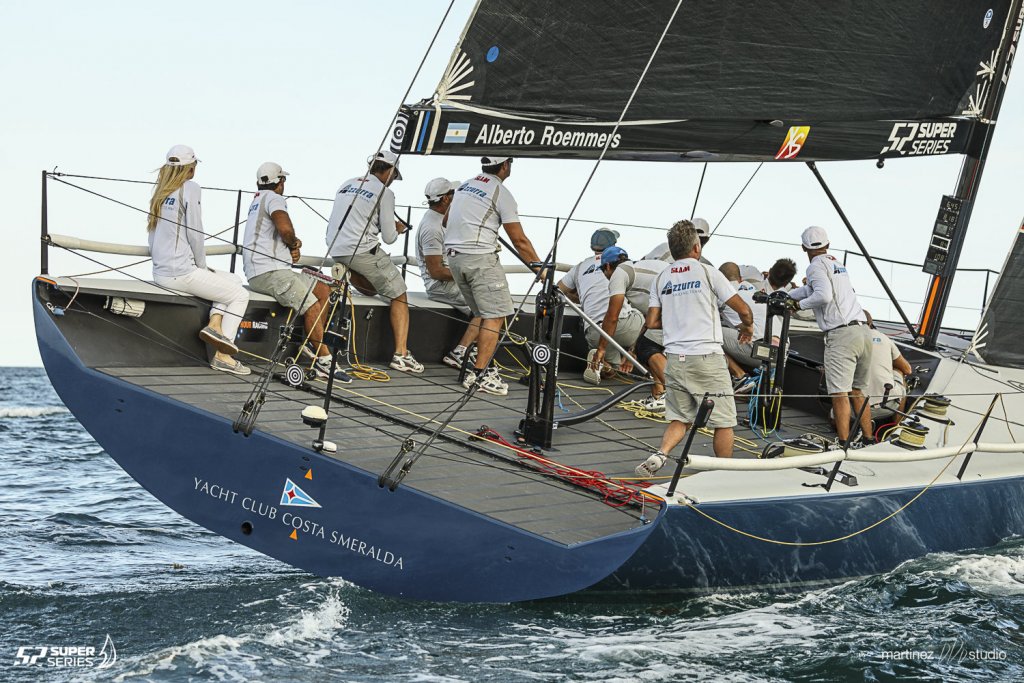 “If someone offered us the possibility of starting the last day 10 points ahead, for sure we’re going to be very happy to be in our position.” Azzurra’s Parada commented on the dock in the Miami Beach Marina, “We need to keep doing what we are doing and every day we keep working to improve our light air speed, which was our weakness in Key West.”

When three boats were over the start line early, before the gun for Race 6, including champions Quantum Racing, Azzurra quickly capitalised and were in control of the fleet by the first turning mark. By the second circuit they were more than 150 metres ahead while Vladimir Liubomirov’s Bronenosec made a worthwhile gain at the top of the second beat and went on to take a second place, their best finish of the event so far. 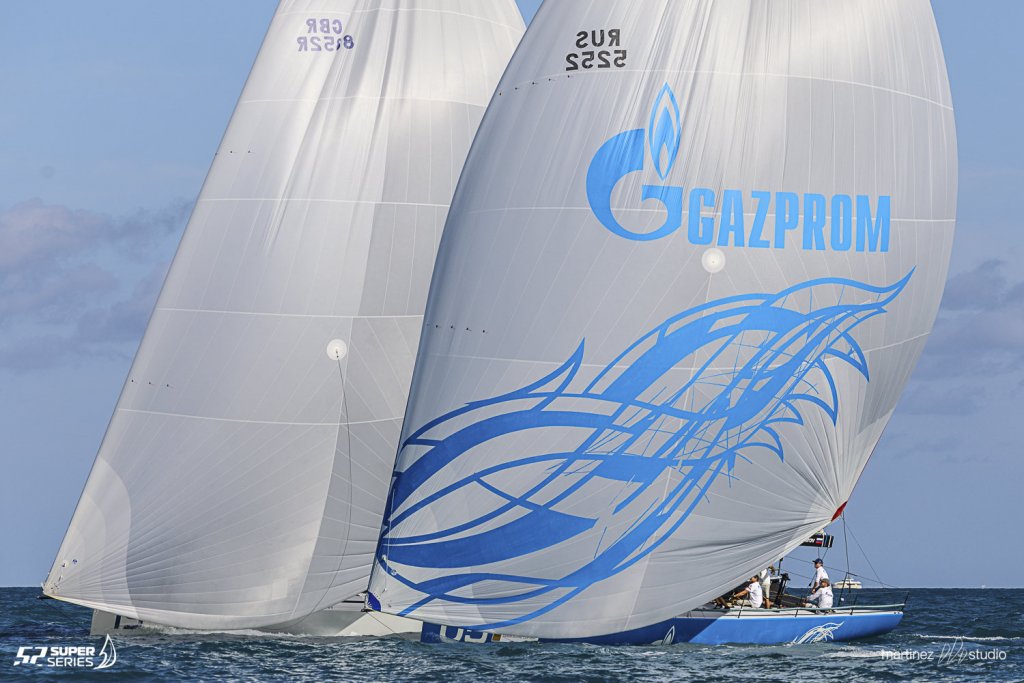 On the left of the first windward leg of the second race of the day, a trio profited from their sharp starts and benefited together Sled, steered by owner driver Takashi Okura, was strong all the way up the beat and was first at the windward turn, with Tony Langley’s Gladiator second.

Provezza once more underlined their so far unerring ability to stay regular, converting a fifth at the first turn to third across the finish line.

Now Provezza, in second and one point ahead of Platoon, have a chance to atone for a costly flatfooted start on the last day in Key West which left them too much to do to secure the podium place they seemed to have been assured of. A hard lesson has been learned. 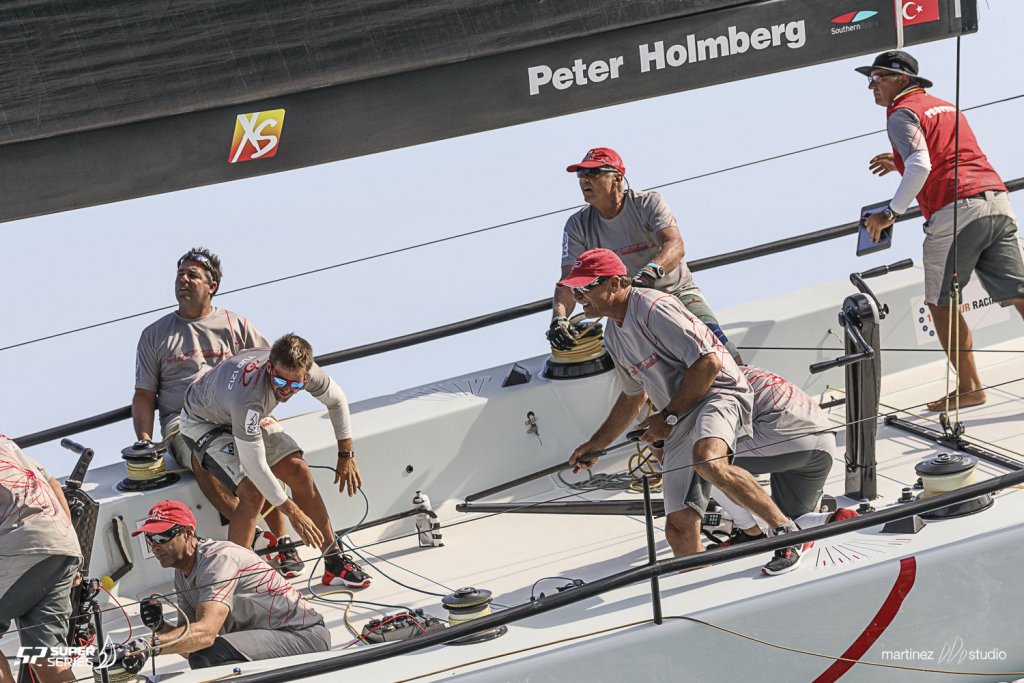 Peter Holmberg, Provezza’s helmsman since the start of this season, recalls:

“The mistake on the last day was trying too hard to nail it. Hindsight, we should’ve just had a decent start and kept ourselves with options to maybe have a good result.”

But of their second place standing going into Saturday’s showdown he says:

“I like it like this. We’re not going in leading and defending. We’re hungry and we want to have a good final day. Light air is not our strong point. But I think we’re doing a great job with what we’ve got.”

“That was our goal coming in here to have good consistent results. Nothing brilliant, but nothing bad. I think the team’s doing a good job.”

Azzurra’s scoreline so far is almost a replica of their winning run in Cascais, where they also had a bogey race just as they did today. Parada, who skippered the team to win the overall title in 2015, continued:

“The second race? As I said earlier in the week glory doesn’t last forever. We still had an OK start. We squeezed Provezza to the right, we went to the right afterwards and we went into a little bit of a hole in the breeze. The boats on the right gained on us and the boats on the left gained on us and we were left there in the middle of nowhere. From there on it was an uphill battle. I think that we lost 2 or 3 points to Platoon and Provezza.”

Lying in fourth overall Quantum Racing are 16 points off the regatta lead but just five points behind third placed Platoon. Tony Langley’s Gladiator crew, with Ed Baird on tactics, hold fifth place, mid fleet. Considering their upheaval and efforts to replace their new boat after being holed on Day 1, Langley, Baird and crew have worked a few small miracles. 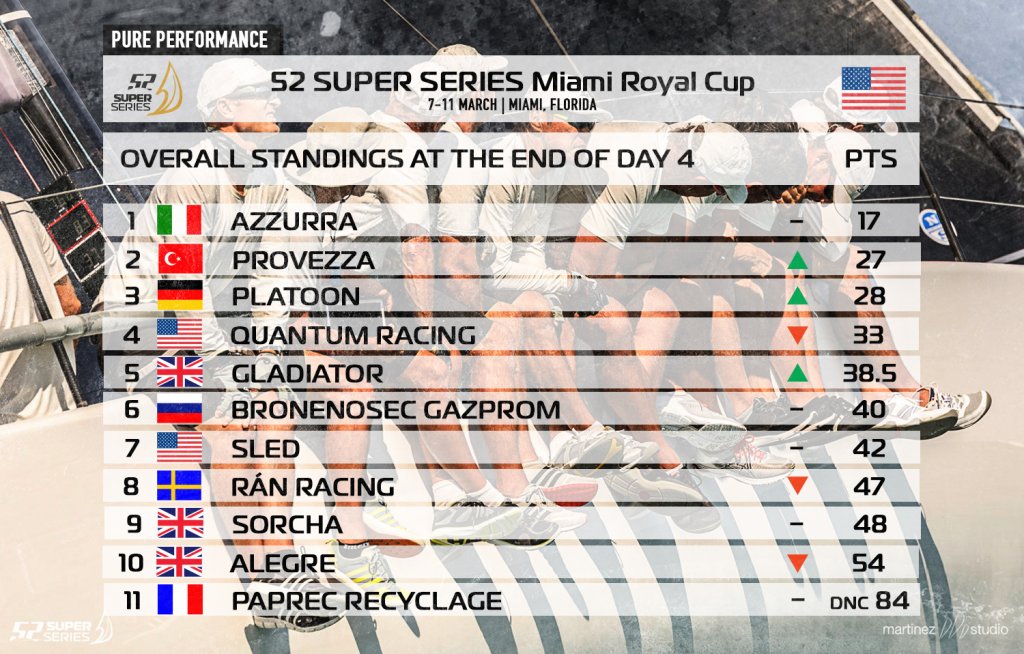 “This fleet is so competitive, it’s so close, you can be easily last in one race and first in the next. It can flip around on you very easily. Today we had a good day. [In the first race] we didn’t have a good start, but we kept our head, kept on chipping and managed to get a sixth. We’re pretty happy with that considering the start. The last race we had a great start and just managed to stretch our legs and have full control of the race. It wasn’t too much going on in terms of pressure and shifts, it was a pretty straightforward course.

You favoured the pin in both starts. What did you see on that side?

“We obviously wanted to have a clean start and we were liking the left, we weren’t too confident in the early right, but happy to then chip up the middle and work on our position plan after that and see where we ended up.”

We feel the boat is going very well in this light air. Don [Cowie, mainsail] and Battler [Robbie Naismith, jib] and Mr. Okura, and [spinnaker trimmer Toshiro] Honda have the sails trimmed nicely and the boat going fast so we feel confident in the boat speed.

How do you chip back after a bad start?

“You’re kind of dictated a little bit by where the fleet goes. You’ve just got to sail in as much clear air as you can and take what shifts you can get and position yourself well relative to the other boats and make little gains here and there. There’s always potential at the top mark for big gains. You’ve just got to keep away from the corners and just take the little gains.”

Why is there so much opportunity at the top of the beat?

“Coming to the top mark often the fleet will play whoever is around them a little bit and try and position themselves well so they led that boat around the top mark. It sometimes opens the door for boats coming in on the left or coming in from the right. If you’re in the right spot at the right time it can be all you need.”

Is that unique to this regatta?

“I think it happens throughout most regattas, there are opportunities there. The last couple of days, because it’s been light air, doing extra tacks and this and that and people overstanding because they’re trying to protect their position on them, it can change around pretty quick and—where as in the breeze you tack all the time and you only lose half a length—in the light you’re losing two lengths [when you tack]. Sometimes the dice rolls your way and sometimes it doesn’t. It can look very easy sometimes and incredibly hard other times. No two top marks are the same.”

Why is everyone so strong on the starboard layline heading away from the top mark?

“The tough thing about when you exit the top mark there’s a void of wind for a long time after the top mark because all the boats have gone past it and it’s just gassy. So it’s very difficult, you’ve got to wait a long time in this lighter air for that clean air to come back through. The majority of the time it’s a lot of that. And then other times, that left hand side [looking upwind] has been reasonably strong downwind, so you have to see something pretty special to be jibing away straight away.”

“That was our goal coming in here to have good consistent results. Nothing brilliant, but nothing bad. I think the team’s doing a good job.”

What’s the secret to your consistency?

It’s Tony Rey and myself as far as the decision-making. I’m having to remind myself not to go for a kill, just go for good consistent speed and maneuvers. And same with Tony, I think he’s doing a good job not swinging for the corners or the fences. OK, you’re not a star, but you’re not in the back either. That was one of our goals coming in here and I think we’re both executing our plan.

For me, it’s the starts, just clean starts. Doesn’t have to be brilliant, to be the start of the day.

[Tony Rey, tactician] tells me how bad he wants something and that’s how much risk I put on it. Just really want to get off the line with all options open. So far we’ve done that OK. Then just all the maneuvers, all the situations with other boats, we make sure we’re clean and I think that’s what is going to be good for us at the end of the day.

What was the debrief after Key West?

“Mistake in the last day, exactly this, trying too hard to nail it. He liked the left and we felt vulnerable in light air and he regretted making that call because he thought he had to do something special to win it and then I went into a tough spot to try to achieve it. Hindsight, we should’ve just had a decent start and kept ourselves with options to maybe have a good result.”

What’s the game plan for tomorrow?

“I like this. We’re not going in leading and defending. We’re hungry and we want to have a good final day. [Light air] is not our strong point. But I think we’re doing a great job with what we’ve got.”

“I think overall it was an OK day. It just shows how difficult it is in this light and patchy breeze. Obviously we had a very good first race. The second race, as I say, glory doesn’t last forever. I think that we lost 2 or 3 points to Platoon and Provezaa so we are now 10 and 11 points clear in the overall. That’s life and it’s OK. It someone offered us the possibility of starting the last day 10 points ahead, for sure we’re going to be very happy to be in our position. We need to keep doing what we are doing and every day we keep working to improve our light air speed, which was our weakness in Key West.”