All ready in Sardinia

Six TP52 teams, partners to six Soto 40’s, are lined up at the dock, fully prepared for whatever Sardinia’s famous Costa Smeralda waters might deliver them for the Audi Sardinia Cup, the international team regatta which starts Wednesday.

A buffeting Mistral put paid to Tuesday’s official practice race, the race officers deciding that too much was at stake on the eve of regatta’s first races to risk unnecessary damage, but the prospects remain for a breezy, brisk opening day. 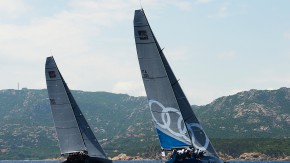 Indeed the talk around the dock at the Yacht Club Costa Smeralda was that patience might be required to allow the strong wind to subside enough to get this famous regatta series under way Wednesday.

While Guillermo Parada and the Audi Azzurra Sailing Team are on their home waters, carrying the hopes and aspirations of the fiercely proud host club, two teams are entirely new to the 52 Super Series, of which this five day regatta is the second stage of four.

Audi Azzurra Sailing Team’s afterguard of Francesco Bruni, tactician and Vasco Vascotto, strategist, have raced these waters since they were teenagers but Cayman Islands based Peter Cunningham, owner-skipper of PowerPlay is loving his first visit to race here with a team he has put together a little over a year ago to sail the Reichel-Pugh design which started life as the regatta winning USA-17.

The French team on Paprec Recyclage are also new to this circuit, with a crew which is comprised mainly of top level amateur sailors. They have only lined up against the cream of the fleet on Monday for a while, moderately satisfied with where they found themselves, but today the Paprec team were completely at home in the breeze, enjoying the sheer adrenalin pumping exhilaration of sailing the TP52’s in strong winds. 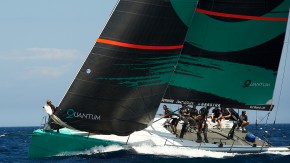 There was a sudden reminder of the price which is paid for any small gear failure in these testing conditions today when Tony Langley’s Gladiator suffered a running backstay failure. A potentially dangerous chain reaction was halted when Langley turned the boat abruptly to unload the rig, but not before the mainsail and job were badly ripped. Gladiator’s shore crew had a busy afternoon and evening ahead, but Langley is confident they will be in good shape for the first start.

This regatta is an important step forward for the famous Sardinia Cup which was first held in 1978 forming a foundation event for the Yacht Club Costa Smeralda to build from in organizing annual and biennial world-class sailing events. It was originally held in alternate years to the Admiral’s Cup.

Sailors love Costa Smeralda for its variety of conditions, and though the breeze has been up for more than 48 hours, by the weekend it is likely to be much lighter conditions which are forecast to test the 12 crews. Among the most potent partnerships is that of the two winners of the 2011 Audi MedCup Circuit Quantum Racing, the Botin Partners designed 52 alongside the Soto champions Iberdrola. Quantum Racing lead the 52 Super Series but only on countback from Audi Azzurra Sailing Team.

Usually when something like that occurs (running backstay broke) then a few other things happen, so we tore the jib in half, the tuff luff is gone, it was a pretty destructive afternoon. We will see what else is hidden, but we should be ready, we have spare parts.
We actually had been going well. We have done a little tuning on the rig, we did some good gybes and so the crew mechanics are all good. We have done so much work in the last two regattas and were handling the boat fine in these conditions.
Tomorrow is expected to be fresh to frightening so we will see if we get a race off. But it looks good for the week.
Chris Larson (USA) tactician Gladiator (GBR)

We feel that everything is going well, we did some training these last two days. We left the dock early today and the boat is going well. We have a couple of new sails. The main feature we noted from Barcelona is that us and Quantum were going very well upwind and losing downwind on RÁN and so we need to do everything we can upwind to gain and stop them gaining as much downwind. But I think that is boat feature, we pay a little downwind and so we have to accept that and just play better than the other teams.

I think it will help being in Sardinia, Vasco and I have sailed here all our lives, we know the place pretty well. And there are some features which are always here. But everyone here has sailed here a lot I would say.

We want to go well, to do well for the Club. It is not easy though. As we saw in Barcelona it’s a three boat match race. As soon one boat took an advantage the others stopped them next time. So it was two against one. That happened in Barcelona after our first day, and that will carry on. It will be a very interesting season.
Francesco Bruni (ITA) tactician Audi Azzurra Sailing Team (ITA)

We did the Melges 32 world here and in 2009 the Maxi worlds here and both were quite choppy. The good thing about this venue is that every direction brings something a bit different. We tend to think the last regatta was all from the one quadrant, S’ly, really, whereas here you get a big of everything. You have the mountains, the straits and these have a real effect.

I think we know that PowerPlay is a very strong downwind boat, it was when Oracle had it and since and I think they have done three or four regattas already. I think they will be good. The French are a bit of an unknown quantity but the Destremau brothers are pretty talented sailors, and we will see how they have optimised what was always quite a quick boat. Gladiator is good in the light to medium airs, pretty potent and I am sure the Botin boats have been putting a lot of effort into optimising to be as fast as they can both upwind and downwind, just as we have. We have done a few tweaks for here on what we need to work on.
Adrian Stead (GBR) tactician RÁN (SWE)

We are in good shape. The crew communication has improved and we have been working on making the boat go fast. We have fine tuned and answered some questions. Working with Juan Vila has been great and the new group, the data we have had back has been invaluable. What we have found is that when we have the sail plan right, the rig and everything balanced, fore and aft trim, rudder angles, when all of those things come together as they are supposed to it is a little bit magical. But everybody is going to have to be on their best game here. They are here to beat us.
Ed Reynolds (USA) director Quantum Racing (USA)

This area is so perfect to sail in the strong breeze. We had a lot of fun today, 20+ knots and we did not break anything. We realise our own weaknesses. Yesterday we lined up and it was OK, today it was just too much fun. Today we were doing OK, but we all know that it will be a different thing when we are racing.

Our ambition is to enjoy the high level company and to do a few things well. Obviously we know that we are not in the same league as some of these guys. So we are looking to improve as a team together, to learn from the others here. We are a bunch of amateurs, 80 per cent are amateurs on the boat are. Hopefully we will be able to play with them and trouble them from time to time. The boat is old, but the sails are new. The settings are new. We have optimised the keel, the shrouds are carbon, but the boat is 2007 so it might be as good compared to the new ones. They are at a different level of development and maybe if we had a new boat we could compete, but we are amateurs here to have a good time and to improve.
Hugues Destremau (FRA) helm Paprec Recyclage (FRA)