Alegre Looking For A Repeat Performance in Cascais

(Monday 15th July, Cascais) – Cascais and the Rolex TP52 World Championship was the best regatta last year for Andy Soriano’s Alegre and as the British-flagged team return this week to the famous Portuguese strong wind racing arena for the Cascais 52 SUPER SERIES Sailing Week, hopes are high among the crew that they will be able to match their third place here, or better it.

The 52 SUPER SERIES is in Cascais for another wet and windy romance with the Atlantic – 🙏 praying for a repeat performance of last year's incredible TP52 World Championship! Racing starts Tuesday!

“It was a great week. We hit it with all cylinders last year. It was a windy regatta and we were going very well. The boat likes the breeze and we like the breeze,” enthuses Andy Horton, the Alegre tactician. “This year we have been going well when the breeze is up too, so we are quite hopeful.”

Alegre, sixth overall on the 2019 standings, have made improvements to their downwind sail package, one of their obvious strengths last year. In Cascais last year it seemed like they were able to sail lower and faster, making big gains on the fleet.

“We have updated the designs a bit. When the wind was over 18kts last year we were fast. We could sail a deeper angle which was OK but the problem really was when you had to come up to protect against other boats, it became hard to handle the kite in the waves, so we have updated the design. I think in terms of the fleet’s direction, in essence we have converged a bit back towards what others in the fleet had and they have come towards what we had a bit, so it will be interesting,” explains Horton.

The strong breezes expected this week in Cascais, for the third event of the season, are expected to really highlight the technical updates all the teams made through the winter, much more so than in the light to moderate sea breezes of Menorca and Puerto Sherry to date.

“I don’t expect there will be much difference between the Botin designs as we all have the same package. That is except for Azzurra, they are slightly different and they are always good in the breeze, so they will be worth watching. I think the Vrolijk designs had some problems here last year [circuit leaders Provezza and Platoon] and they should be better this time,” Horton adds. “We have generally been hitting our goals this season so far. We feel more comfortable with the boat and we feel more comfortable within the team – it’s a seasoned team – these things come with being into the second year with the boat and the second year with this crew as it is. For sure the boat is going fast in all conditions now, it is much more all round. Now we are getting to the finer, small points and need to put it all together more regularly,” says Horton.

“It is just a magical place. We have had the windiest weeks here, it is awesome. It is tiring. It is physical. It is hard. But when you come in you are smiling,” he recalls, “We had one awesome gybe last year which we all remember, the best gybe of all time in 25kts, full planing all the way on the wave and gaining on everyone. It was a magic moment.”

For Quantum Racing’s navigator Juan Vila it is his first time back in Cascais since winning with Quantum team in 2015:

“It looks like a breezy week, nice conditions, but very different from what we have been having this season so far. We are hoping we can bring our averages up a bit this week. We had a lot to learn from Puerto Sherry. We have been trying to sort out our weaknesses we had there. But this is such a different game here. If we did another regatta like Puerto Sherry it would be hard to get back from there to win the season.”

Circuit-leading Provezza’s John Cutler insists that their focus is treating each race on its merits:

“The way we are looking at it is that this is a 50-race series and these are another 10 races coming up this week to the midpoint of the season. We approach every day the same, one race at a time. It is going to be really windy and there is not a big difference between the whole fleet. I think it will be a very open regatta,” says John Cutler, helm of Provezza.

Harm Müller-Spreer’s Platoon are missing their America’s Cup and Olympic gold meal winning strategist Jordi Calafat this week. The injured Spanish ace is being replaced on board by coach Morgan Reeser. 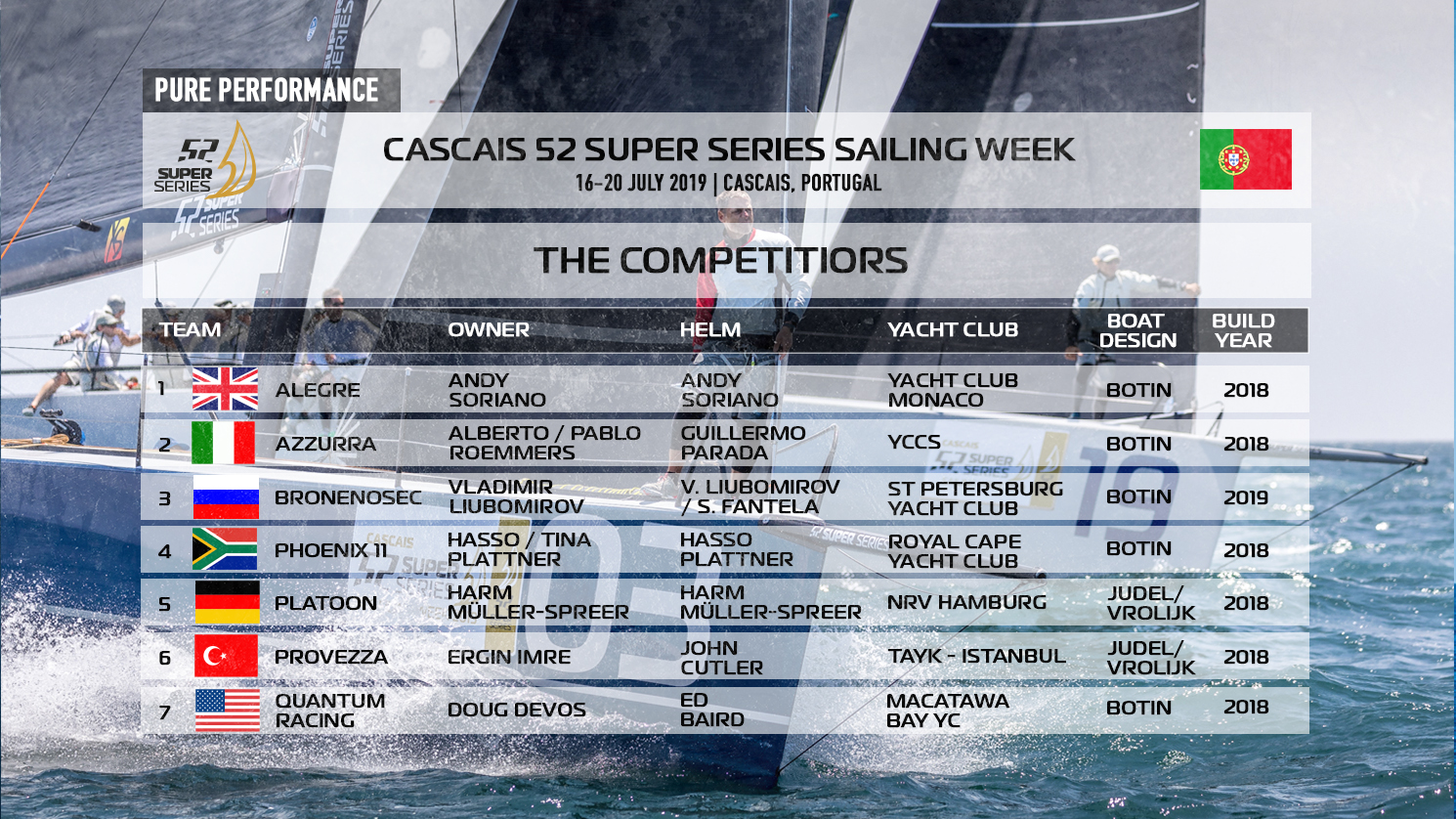