The Audi Azzurra Sailing Team gained their due reward for their fighting spirit and cool heads when they narrowly won the high value coastal race at the 52 SUPER SERIES’ second regatta of the season, the Audi Sardinia Cup.

With the team which sails for the host club, the Yacht Club Costa Smeralda, finishing with one boat between them and rivals Quantum Racing, Azzurra go into the final day of the regatta with a lead of just one point with up to two more races possible.

Though the French team on Paprec Recylage lead across the finish line of the coastal course, they contravened the sailing instructions when they sailed between the small, rocky island of Spargiotto and Spargi and were latterly disqualified. 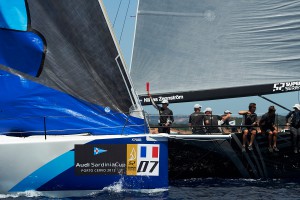 As expected, given the course through the islands archipelago of La Maddalena in a light sea breeze, there were several key transition zones of light and variable winds, which required patience and a calm temperament.

In fact leading could be a burden in these conditions.
Ed Reynolds of the Quantum Racing Team

The last 1.5 miles to the finish were completed in a very light breeze. Peter Cunningham’s crew on PowerPlay looked to have done everything they needed to cross the line second, but the breeze turned extra fickle in the final 200 metres to the finish.

Tony Langley’s Gladiator made what has become their trademark straight line for the finish, passing the gybing PowerPlay and very nearly catching Azzurra which crossed only by a bow. PowerPlay went from second – potentially a first – to fourth in metres, while Azzurra gave their partisan fans a memorable win.

The 24 miles course took the fleet out to round Spargi Island. After a short 1.1 miles beat it was a long run and reach to the island and a tight reach and then beat back.
Audi Azzurra and Quantum Racing started best and were quick to the Sardinia shore to pick up the best of the wind shift which ensured they were first and second around the first mark. Quantum rolled through the leaders with better speed and the two stretched away from Paprec.

But they were first to find, and mark, a nasty hole in the breeze close to the SW corner of La Maddalena. The duo were snared, sails limp, for over five minutes while the fleet – seeing their predicament – sailed wide around them.

At the next transition to the turn for home, the lead swapped three times between RÁN, Gladiator and finally Paprec who chose to ‘couper le fromage’ – cutting the corner which gained them a big advance, leading by over three minutes as they passed between Caprera and the main island.

The French celebrations were unfortunately muted, giving way to quiet satisfaction of a job well done by the Azzurra team.

With a heatwave predicted to start Sunday, bringing sweltering temperatures of 35C, the final day of the 52 SuperSeries regatta is, once more, a finely poised for a showdown between Azzurra and Quantum Racing.

In the end it has been a great day for us, we sailed very well, we attacked at the right moments. We made a few mistakes early in the race, we were ahead and were passed by Quantum, but they were not as bad as some other teams mistakes. We lost five or six boat lengths to Quantum, but we attacked at La Maddalena, it was a weird because we all knew the whole fleet was going to come back, but in the end we know it will be a match race with Quantum Racing and in the end we are very happy that Gladiator was in between us. In the end we just need to keep sailing well.
Francesco Bruni (ITA), tactician Audi Azzurra Sailing Team (ITA)

It was a hard day. It started out wonderful but everyone knew today that the potential was that it would end up a race like this. Once we ran into the hole I am not sure, it seemed like the sequence of events would stack up the way they did in the end. Azzurra did a great job of getting out into a good position. It got a little crazy at the end, but it is a tough one to even debrief. You go into these races saying they are what they are, these races, and it was what it was. I think the guys sailed a strong first beat, a great run all the way down. We had everything going the way it should and then, wow. It is a bit of the burden of leading, but then Azzurra were with us in it and they came out OK in the end. A point in the last day and we figured all year it was going to be like this and here we are. We gave it our best today and will be ready tomorrow.
Ed Reynolds (USA), director, Quantum Racing (USA)

It is a bit of a lottery those races. We had a bit of a bad start and were back of the pack for a while and then saw Quantum and Azzurra go dead in a hole and we managed to avoid that. It was always going to be a bit stop start, so you try not to get frustrated early in the race. We try to stay calm, we don’t always manage it. We are looking forwards to tomorrow, another light day.
Tony Langley, skipper-helm, Gladiator