(Sunday 16 September, Valencia) – On the eve of the final regatta of the season the 52 SUPER SERIES family turned out in force in Valencia to honour friend, colleague and former crew Andrew ‘Bart’ Simpson on the occasion of the 5th Bart’s Bash.

Sailors from all 11 TP52s, many of whom competed with or against Andrew during the 32nd America’s Cup here in Valencia, or when he was part of the afterguard on the TP52 Team Origin, joined in for a day of light-hearted fun. As well as an unofficial TP52 practice race that was sailed for Bart’s Bash, team members took part in a head-to-head SUP and kayak relay race. 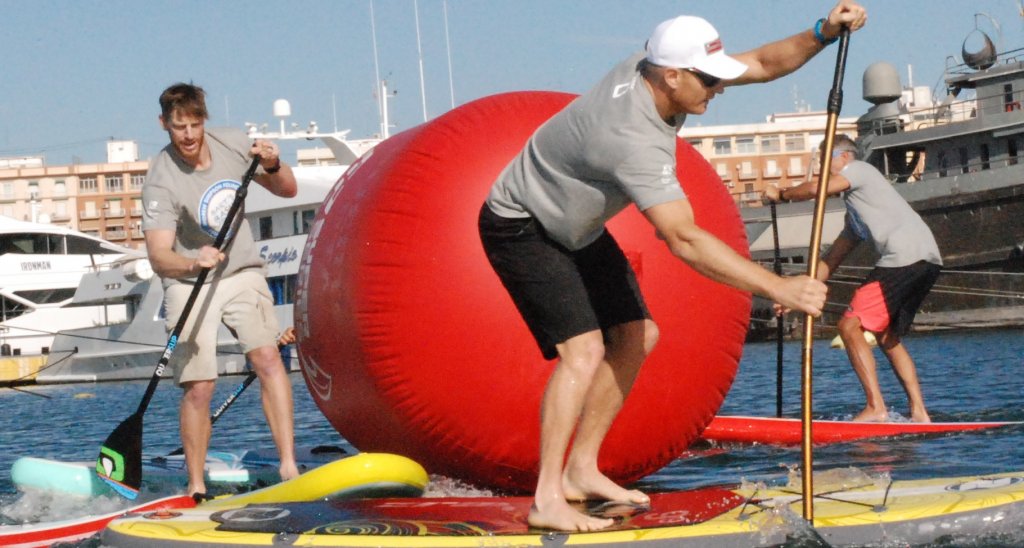 In perfect September sunshine Jimmy Spithill won the paddleboard race only 300 metres or so from where he lifted the America’s Cup in February 2010. He passed the race lead to 34th America’s Cup winning grinder Shannon Falcone, providing the grunt up front and team logistics ace Giulia Caponnetto adding a little extra paddle power behind, ensuring Luna Rossa were victorious. 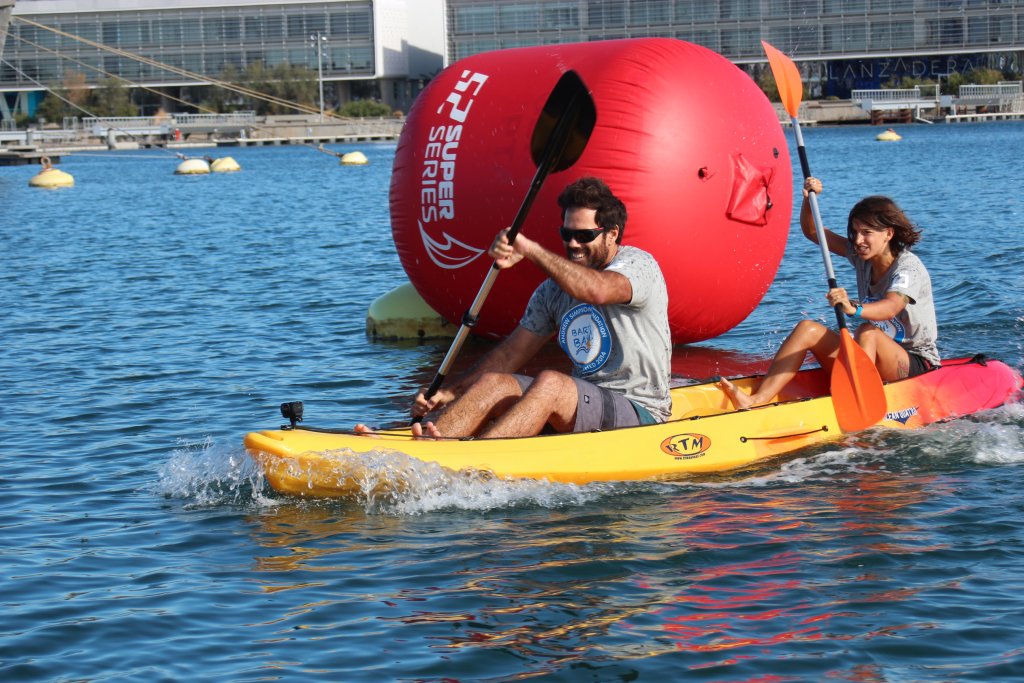 The third component of the “triathlon” was a post-sailing quiz with the topics centred around 52 SUPER SERIES history, sport and sustainability. Azzurra won the quiz but the overall winners of the day were Luna Rossa. 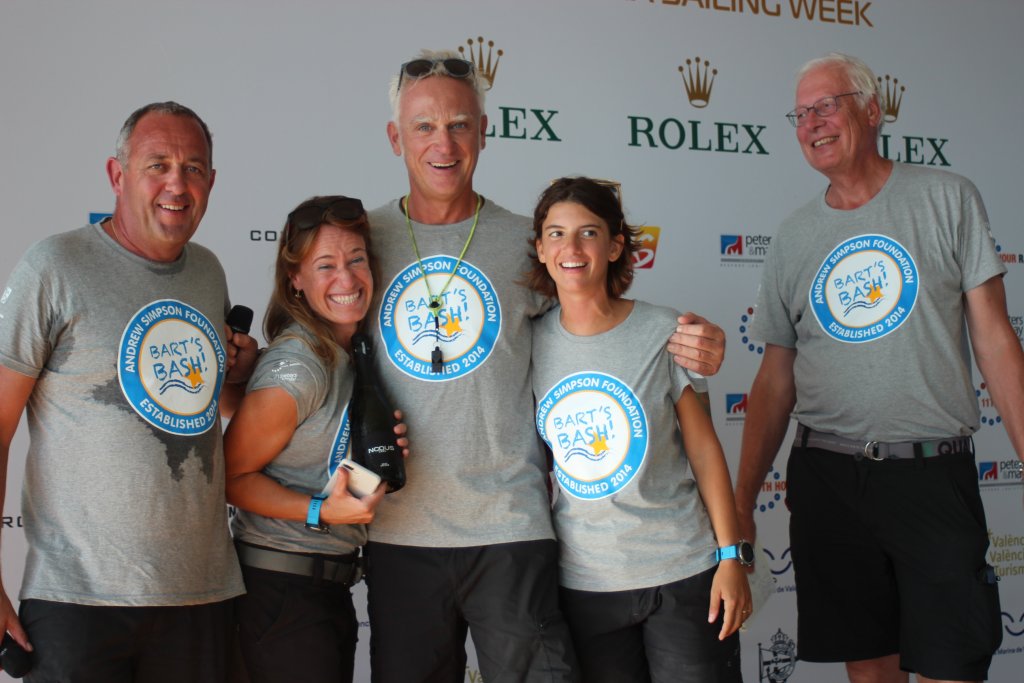 Bart’s best friend Iain Percy, with whom he memorably won Olympic gold in the Star in Qingdao in 2008, is sailing as tactician on Gladiator this week. Percy spoke representing the Andrew Simpson Foundation:

“It is so nice to be here in Valencia today because Bart and myself and so many others in this group had some great times here with the 2007 Cup, we had a lot of fun on the water and some fun in the bars together occasionally too. So it is great to be back and it is so nice to see the world’s best sailors all wearing the same t-shirt with his name on, remembering him and the whole community of sailing participating.

The most competitive thing was the paddleboarding and the kayaking and that was nice just being on the water together having some fun. Sailing is about going out racing for most of us but it also fun just mucking about on the water.”

Explaining the work of the Andrew Simpson Foundation to the assembled sailors he said:

“The foundation has given away over one million euros to 66 different projects around the world, in 20 different countries. Bart was always so supportive of other people’s efforts. His name is a great beacon and a great motivator for people. The main mantra is to advantage people through sailing. Bart always believed money or background should not be a barrier to participation and through the foundation we have managed to get hundreds of thousands of children on the water every week.” 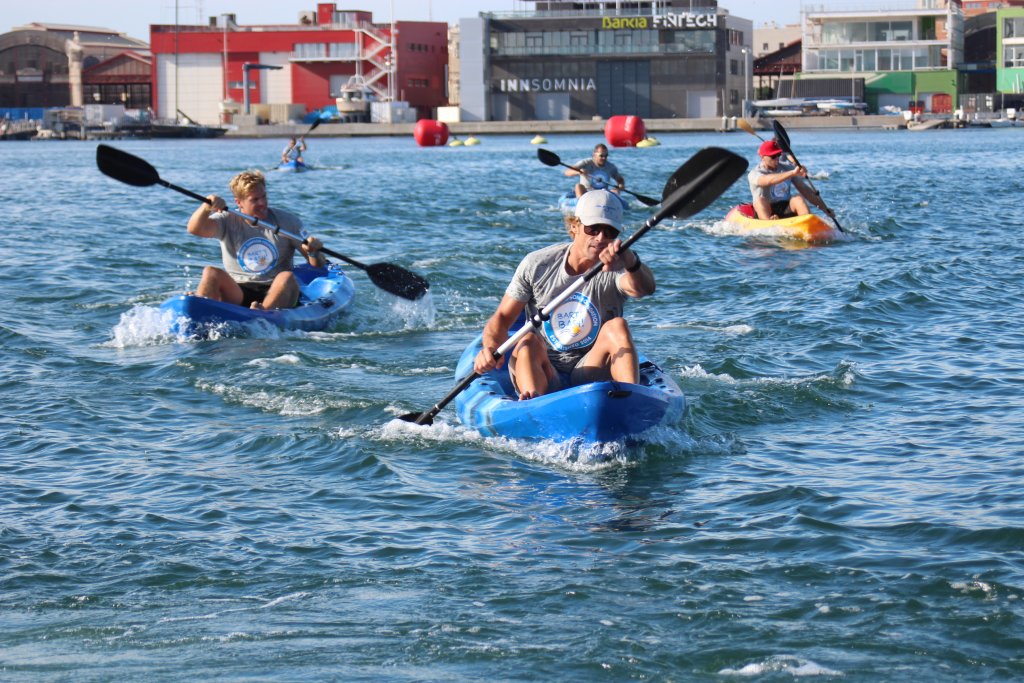 The day was supported by the 52 SUPER SERIES’ sustainability partners 11th Hour Racing who made a donation to the Andrew Simpson Foundation based on the amount of rubbish collected during a one-hour clean up by local children and members of BioAgradbles, a local organisation that organises beach clean ups and which recycles and then repurposes the plastics.   Marc Blees of Code Zero – a past Finn and Star boat sailor friend of Bart’s – provided commemorative Bart’s Bash t-shirts to all the teams and organisers, as well as donating 50% of all revenue from their 52 SUPER SERIES online shop.

“Bart’s Bash is an incredible event that brings together the sailing community all over the world, and it was great fun today here in Valencia.  11th Hour Racing, through our partnership with the 52 SUPER SERIES, is very happy to support the Andrew Simpson Foundation with a donation of €1200, €10 per kilo of trash we collected in today’s marina clean up. A great day all round.”

Donations to the Andrew Simpson Foundation are welcomed via the TP52 Justgiving page.