(Tuesday 28th April, Cape Town) – After what has proven to be the biggest challenge in logistics since the start of the 52 SUPER SERIES, the TP52 fleet is back at sea, heading “home” to the Mediterranean from Cape Town, South Africa aboard the 120m LOA general cargo ship, BBC Dolphin.

The Odzala Discovery Camps 52 SUPER SERIES V&A Waterfront Cape Town regatta proved a memorable success in early March, racing for the first time ever on the iconic South African waters in the shadow of Table Mountain. While Azzurra ran out narrow winners ahead of Hasso Plattner’s local favourites on Phoenix, unfortunately, the global pandemic put paid to the second planned regatta, the Rolex TP52 World Championship, which has had to be re-scheduled to September.

Now with the fleet released after being trapped by the COVID-19 lockdown in the South African city, the race boats and all the ancillary containers and support RIBs are expected to arrive in Valencia by around the 16th May.

Getting the fleet and equipment loaded onto the ship has required a considerable team effort on the part of 52 SUPER SERIES logistics partners Peters & May; their local agents Pronto Clearing; a diligent and committed team of 52 SUPER SERIES shore crews who have remained in Cape Town, some for more than six weeks; and numerous Cape Town locals who have ensured the process has been completed in the most diplomatic, pragmatic manner possible. A top priority has always been the health, safety and well-being of the local population.

“With the boats now safely on their way, we have given ourselves options to be able to respond quickly in order to deliver exciting 52 SUPER SERIES regattas when it becomes safe to do so. We remain very positive and have several possible plans in place,” says Agustín Zulueta, CEO of the 52 SUPER SERIES. “I have to pay a very warm tribute to all who have played a role in what has been the most challenging period in our history, particularly Justo Gosalbes of Peters & May and South African Shosholoza America’s Cup sailor Mike Giles who has been something of a guardian angel in Cape Town ensuring we could speak to the right people and get positive answers when we needed them.”

Key permissions were sought and granted to allow selected 52 SUPER SERIES team personnel and their agents to work on the race boats that were locked down within the V&A Waterfront dock area, close to where the yachts were berthed for the Odzala Discovery Camps 52 SUPER SERIES V&A Waterfront Cape Town regatta in March. With a huge backlog of goods and cargo locked down and waiting to be moved, the danger was in the TP52s being caught up in the rush to clear the backlog when the port is due to re-open on 1st May.

So advance permission was granted to allow the cargo ship to come into the V&A Waterfront dock area to allow the nine race boats – all that competed in Cape Town less Phoenix 11, which will stay at its home base – and teams’ equipment to be loaded on to the ship. Previously no movement of cargo has been permitted within the dock area, so by allowing the ship to come to its cargo has meant the yachts could be loaded by a fixed, dockside crane. All of the boats have been looked after by the local Phoenix teams’ Tony Norris, James Largier, Alex Allison, Tim Marsh, John Upham, Sled’s Mathew Joubert, Alegre’s effervescent Pedro De Cospedal , Provezza’s Jo and Kelly Lees, Platoon’s Felix Schmidt and Mike Giles from Quantum Racing and Bronenosec. By all accounts Quantum Racing’s indefatigable Brendan Darrer has kept the group driving forwards in great humour. Normally there are up to 30 personnel involved in the ship loading, this time there have been a dozen, working in three shifts of four. 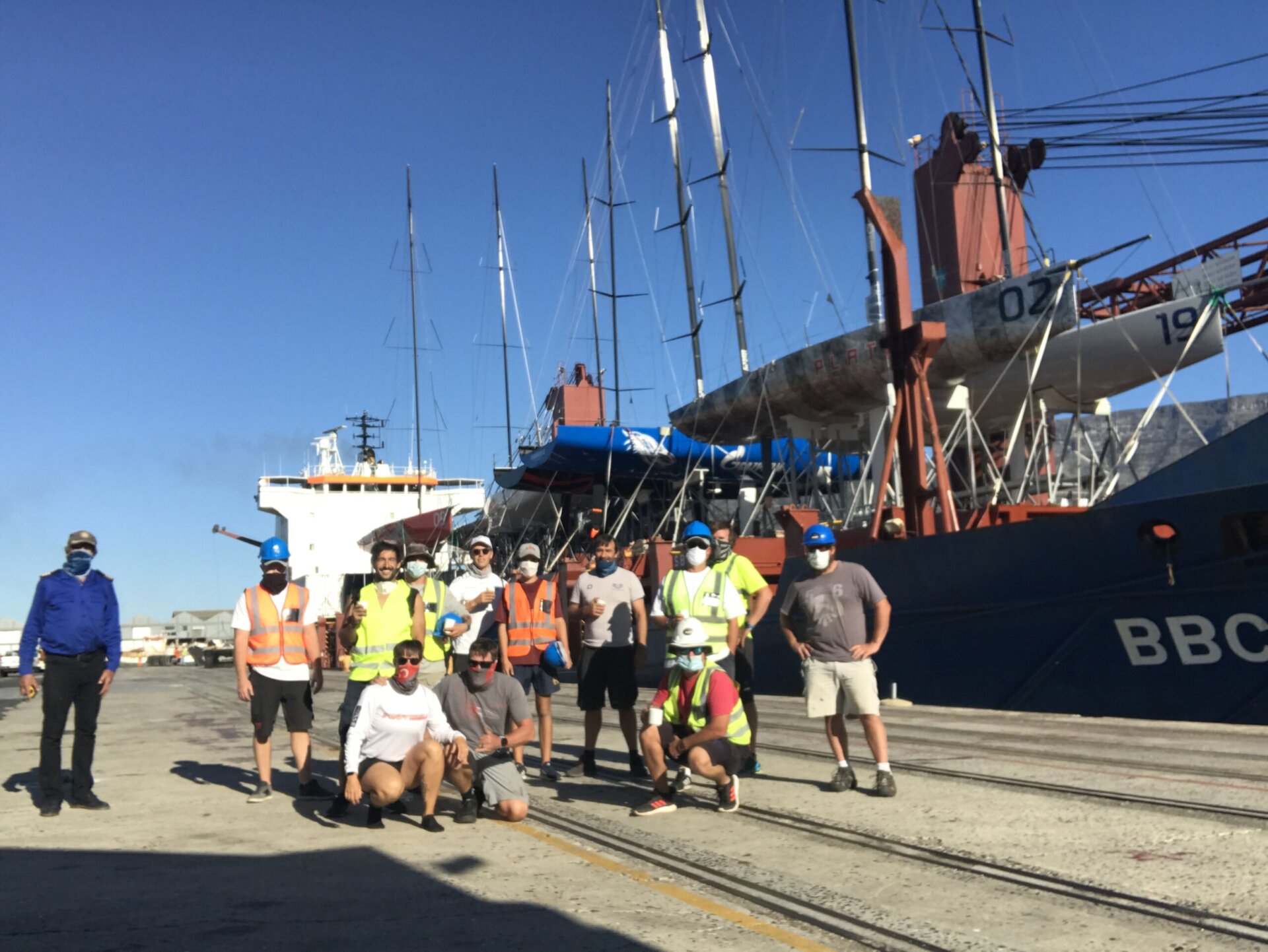 “To be honest there has been a great team spirit. We have had no issues, everyone has stepped up to the plate and we have got on with the job. Honestly, it’s been one of the swiftest, most efficient loadings we’ve ever done – hats off to the local crane driver. To be fair as shore crew on the 52 SUPER SERIES we are so lucky in the jobs we do, we have really had a chance to reflect on the living conditions we see around here, so I would say here we have been ‘just doing our jobs’. We have had great cooperation from the staff at the V&A Waterfront,” explains Darrer who has been with the TP52 fleet since the very early years. “Mike Giles in particular has been a giant. His contacts have been invaluable, and his approach has ensured we have been able to get the necessary permits to work and finally to customs clearances to move our valuable cargo. The 52 SUPER SERIES management have been great, Agustín Zulueta, Eva Piza, Rob Weiland from the [TP52] class; Pronto Clearing here and the shore crew have been excellent. And we have all had all possible support from our owners. Now it would be nice to be able to go racing sometime when it is safe to do so. For sure we all miss it.”

“At the moment the remaining 52 SUPER SERIES events are scheduled with the primary first objective to run the Rolex TP52 World Championship in September in Puerto Portals. The rest of the dates remain open with several options.”