With A Little Luck

(Monday 17th August, Valencia) – Eleven TP52s sailed the Official Practice Race today off Valencia’s Malvarrosa Beach, the final prelude to Tuesday’s start of the final regatta of the season, the 52 SUPER SERIES Valencia Sailing Week. Each of the teams returned to the Marina de Valencia, all focused on the same objective, to finish the 2018 season on a high, ideally with the win.

Winning the last event of the season would be the cherry on top for Quantum Racing who are 31 points clear at the top of the standings.   For those four boats that really are engaged in the scrap for the second and third steps on the podium – that is Azzurra, Platoon, Sled and Luna Rossa – victory would ensure their best possible overall finish.

But for others, winning the final regatta of 2018 would be the final realisation of their top level potential, perhaps derailed so far by too many small mistakes, a speed issue, or indeed other teams making fewer errors.

Lying second, Azzurra have 159 points and so are five points ahead of Harm Müller-Spreer’s Platoon and six points up on Takashi Okura’s Sled. The Prada backed Luna Rossa are fifth and would have to make up at least eight points to make third step on the podium.

It’s a big ask, but conditions are likely to be relatively light, shifty sea breezes, and so consistency may prove very difficult.

For certain, Luna Rossa’s Vasco Vascotto is not very happy with their recent performance – their fifth in Puerto Portals – and believes his team could win their second regatta of the season on the America’s Cup waters off a city that holds many happy memories.

Vascotto, who made his mark with the Mascalzone Latino team in Valencia during the 32nd America’s Cup observed:

“Portals was a bit of a disaster for us losing so many points. From first in Zadar we were almost last there. That week we just did not seem to have luck on our side, but hopefully it will change here. We all came back here to the city that was our home and it changes everything. I had five good years of my life here. And hopefully it will be fun again here. I liked it so much today walking from the hotel to the Marina I can remember everything that happened to us like it was yesterday. These were some of the happiest times of my life. And I think that the America’s Cup in Valencia marked a real high point in the history of world sailing.”

Ergin Imre’s Provezza lie eighth on the leaderboard, which is disappointing for a team that finished fourth overall in 2017 and scored two podium places, including a regatta win in Puerto Portals. But they have proven to still have all the tools, talent and firepower to win an event, tactician Tony Rey explains:

“We have ended up on the back foot a little, whether we have ‘ended up there’ or ‘put ourselves there’ I don’t know, but we are looking to do a bit of a reset for next season and obviously finish on a high note. Everyone has put in the biggest effort they can and we are looking at each other and saying OK let’s make this fun and see if we can come away with a podium, knowing that the top guys have a few potential distractions, some match racing. We want to go out and bang off a few good races. And with the conditions we saw over the last few days, there is going to be a lot of inside-out on the scoreboard this week. There is no reason we can’t win. I have said before whoever wins this event has to do all the little things well, and then get a little bit fortunate out there with the shifts.”

Valencia has been good for Azzurra, who won here in 2012, but events conspired against the Italian-Argentine team today in the practice race.

The fierce superstition shared through the team dictates that they never ever win the practice race for a regatta, believing it brings bad luck.  But today they found themselves sandwiched between two converging boats at the finish line and had no choice but to sail on take the gun.

“That’s the first time we have ever won a practice race,” skipper-helm Guille Parada said through a forced smile. “But we had no choice, we had nowhere else to go.

We all enjoy it here, but it is a very demanding venue. It is going to be intense for sure. And maybe a couple of personal relationships in the fleet will be endangered for a couple of days, but hopefully we will be all good at the end of the week, all friends again. The forecast is for light, light conditions, and so it will be a good test for the tacticians, for the helms and the trimmers.”

Racing at the Valencia 52 SUPER SERIES Sailing Week starts Tuesday and finishes Saturday with the end of season prize-giving on Saturday night. All of the action will be broadcast live at www.52SUPERSERIES.com and via the app throughout the whole regatta on 52 SUPER SERIES TV with live commentary and expert analysis throughout each race. Shows start 15 minutes before racing is due to begin. 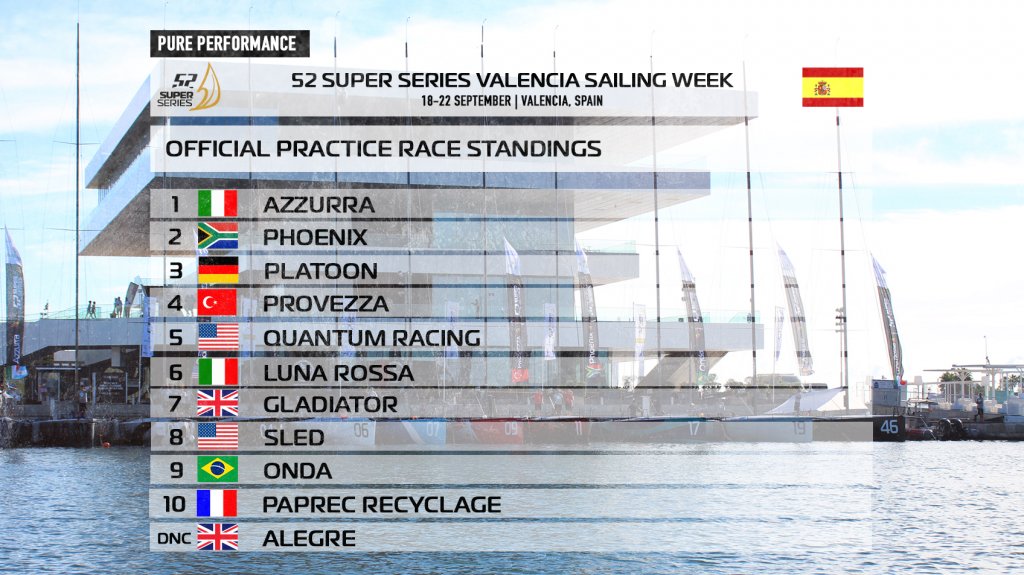