Past world champions and leaders of the 52 SUPER SERIES Azzurra will stick by the same fundamental principles which served them well last month when they won Quantum Key West 2013 as they bid to land the 52 World Championship crown in Miami, Florida 5-9th March. 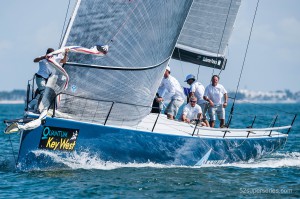 The team which is skippered by Guillermo Parada (ARG) believe focussing on delivering their best, polished performance rather than being preoccupied with achieving final result is the key to repeating their success of Key West where they won the first 52 SUPER SERIES regatta of the season.

For us it is simply important to make sure that we are just sailing our best each and every day. It sounds simple but making no mistakes is the key to a good result and if we can do that on board Azzurra then I think we have a good chance. We look to have fun together and sail well together, that is our main philosophy. We don’t stress about results at all, we simply focus on sailing well.
Says navigator Bruno Zirilli (ITA)

One of the factors which also contributed to Azzurra’s season opening success was spending a week together training in December in West Palm Beach, one month before the Quantum Key West 2013 regatta.

There were two reasons for this. One was motivation, to have the team revv’d up, prepared and ready to go racing, to be in race mode from the start, and the other was technical. We looked at a lot of sails and the technical details of our speed. Every day it was like going racing at a regatta, six hours on the water with a lot of starts. We learned about our jibs and spinnakers, and it gave Tomislav (Basic, new strategist/starting helm) a chance to learn the characteristics of the boat. I think the crew adapted very quickly with him and he has fitted in very quickly.
Bruno Zirilli (ITA), navigator, Azzurra 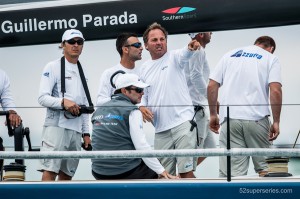 Zirilli, whose family home is in Milan, came to the TP52 from the America’s Cup where he sailed his first big Cup project with +39 with Ian Walker and Iain Percy.

My department is very much the numbers and data logging and I do almost all of that myself and the analysis. We have a company that helps out with the electronics if we have problems, but I like to set up all the systems myself and look after them.

The boat is the same as it was last year other than it is definitely a little faster than it was. That is what happens in the second year. The first year you are learning, the second season is the best, you are down to doing all the little things to fins 0.01 of a know here and there.

And now we know the other boats like Rán and Quantum Racing really well, where they are good and not so good. In fact we are very similar but Rán can be a little quicker downwind in some conditions.
Bruno Zirilli (ITA), navigator, Azzurra

In Miami at the Gaastra 52 World Championships it will be the owner Alberto Roemmers JR who will steer Azzurra. He already has a formidable record winning once in Palma and finishing second in Valencia.

It is a little different to have Alberto steering. He does a fantastic job and it is great he has the opportunity to steer the boat, he loves it, but we do a bit more work beforehand to make sure he is comfortable. Yes, it is a little more work for the crew, but we enjoy it. We will train for four days before the regatta starts and initially GJ (Parada) is with him all the time telling him where he is and what is needed. That means Alberto is hearing only one voice, and then progressively he will just have input from the ‘speed loop’ – the trimmers – that usually takes a couple of days.
Bruno Zirilli (ITA), navigator, Azzurra

Zirilli loves sailing on Azzurra and in the 52 SUPER SERIES. Although he is now a highly respected, in demand navigator he started out in the 1990’s as a bowman in ¼ tonners in Italy, also sailing Lasers and a Laser 5000. He sailed all over Europe in the ¼ tonners, Italy, Germany, France, including a second place at the ¼ worlds in Poland in 1995 when there were 15 boats competing.

It was a great class then with the likes of Vasco, Flavini, Carol Jablonski, Doreste, Pedro Campos, all active.

At the time I was just about half professional until maybe 2000. Then I had to lift a spinnaker which was bigger than me and I figures it was time to move back in the boat. I have an engineering background. There was a very complicated computer on board the boat I was with and the owner asked if I could figure it out. I did and started in the role as navigator, joining +39 in 2004. Until then I had a ‘normal’ job as a communications engineer with Siemens. I gave it up when I realised there was more money and fun in sailing.

+39 was a great team and good times. Of course in the end it was all a big mess money wise, but we worked hard and did a good job. It was great to sail with Ian Walker and Iain Percy. I just focussed on doing the job well and then went to Desafio for the TP52.

I love the job. I think I am good on the technical side of things and staying tuned into my job. My key strength is setting up a reliable system which I know well, producing reliable numbers which I can trust.
Bruno Zirilli (ITA), navigator, Azzurra