(Tuesday 17th July, Cascais) – If the first two regattas of the 52 SUPER SERIES season in Croatia were tactical, cerebral and subtle; about moving up and down the gears through small wind variations, choosing the right side of the course and remaining consistent despite big shifts in wind direction; as the Rolex TP52 World Championship started today, Cascais exerted a welcomed reminder of the flip-side of the racing coin – solid winds, surfing waves and big moves that require slick, accomplished crew work.   Croatia was exacting. It was the challenge of adapting to new venues. Cascais is an old friend who punishes mistakes, it is about executing perfectly on a totally familiar race course, one which everyone knows where – and when – they want to go, but only one or two boats can sail those premium fast lanes.

With 17-28kts of typical NW’ly wind Races 1 and 2 of the Rolex TP52 World Championship Cascais 2018 were sailed in a building swell which, as ever, delivered downwind surfing gains that were as important as the choice of shift or wind pressure. Watching the most polished crews and the top drivers was instructive. And just as the conditions proved typical of what the TP52 fleet sailors have come to know and love about Cascais, so it is the two most seasoned and successful teams on the circuit that share the overall lead. Azzurra won the first race and took second in the next one, but Quantum Racing lead the title charge because their scoreline is the mirror image of Azzurra’s. With Dean Barker on the helm, Quantum Racing were second to their old rivals in the first race, and then won the second, and so are credited with the championship lead after Day 1, on countback only.

“That was champagne Cascais conditions. When the fleet committed to coming here, that is what we were looking for. It was a great way to start the regatta, but Azzurra sailed really, really well.”

“Today was about balancing the risk of racing hard, the risk in the manoeuvres you have to do. We were pretty aggressive gybing on the first run of the first race, and on the second run of the first race as well, when you are doing a lot of boat handling there comes risk. In the last race we gybed and the sheet went over the prod, we were over layline anyway, and so we did not have any more gybes to do. But you aggressively boat handle and in 30kts, then there is always the potential for it to go bad. We were just consistent, no big highs, no big lows.”

Azzurra came off the start line and went early right with all the conviction, impetus and motivation of a team that has underperformed this season, starting here as 2017 circuit champions, but 25pts off season leaders Quantum Racing. They sailed immaculately, slick and smooth in their handling, and accurate in their laylines to win their first race of the season. Sled, one of the most consistent teams this season, saw their kite rip from luff to leech on the run and so dropped from fourth to eighth.  But for Azzurra, and new tactician this season Santiago Lange, it was clearly good to finally chalk up a win and prove they have lost nothing of their Gaucho’s free thinking spirit in the breeze. In contrast it was a miserable start for Luna Rossa, which suffered an hydraulics failure and so had to sit out the first race.

“Finally a win. Finally! I think that we put it all together better. The guys did a very good job sailing the boat, and we made no mistakes, like all the mistakes we did in Zadar, several times. And when you put it all together like that, the level of this team is high enough to win, for sure. Today it was key to the right and make no mistakes. It looks easy but any gybe – like gybing at the top mark – is a big manoeuvre for sure, and so it is not all about tactics, it is about sailing the boat really well and the guys did that today.”

Sled led early in the second race that saw the breeze building up still more – over 25kts at some times – but they were rolled after the top mark. Azzurra benefited on the last run when Alegre wiped out and so took second and earned their share the championship lead. The two leaders already have five points of a cushion over Andy Soriano’s Alegre – two fourth places today – and Harm Müller-Spreer’s current world champions Platoon.

“The top two boats are pretty quick upwind, went to the correct side of the course, and didn’t have any majors, and I think that was pretty much it! We had a couple little things, but they didn’t have any mistakes that I saw.”

The forecast for the coming days promises similar brisk conditions. Racing is streamed live every day from 15 minutes before the start at www.52SUPERSERIES.com and via the app.

“It’s the first day the whole fleet has been in any wind the whole year, so the whole fleet’s just trying to figure out how to setup the boats, they’re all new boats, so it’s funny that we’re here at the Worlds and have never sailed in over 16 knots yet in the year! Our speed loop did a good job figuring it out, we went through the J3, J4, A2+, A4, sails that sometimes we don’t see very often.  It was kind of the standard race course that you see here in Cascais, a race to the right hand side, but today it was so windy that the mountain made a pretty big hole on the right. You could go off the line in 20-22 knots and look up and have 12 knots in front of you in the right hand corner, and you had to figure out how to bail out of there or to go into it further. Always trying to be as far right as you dare.” 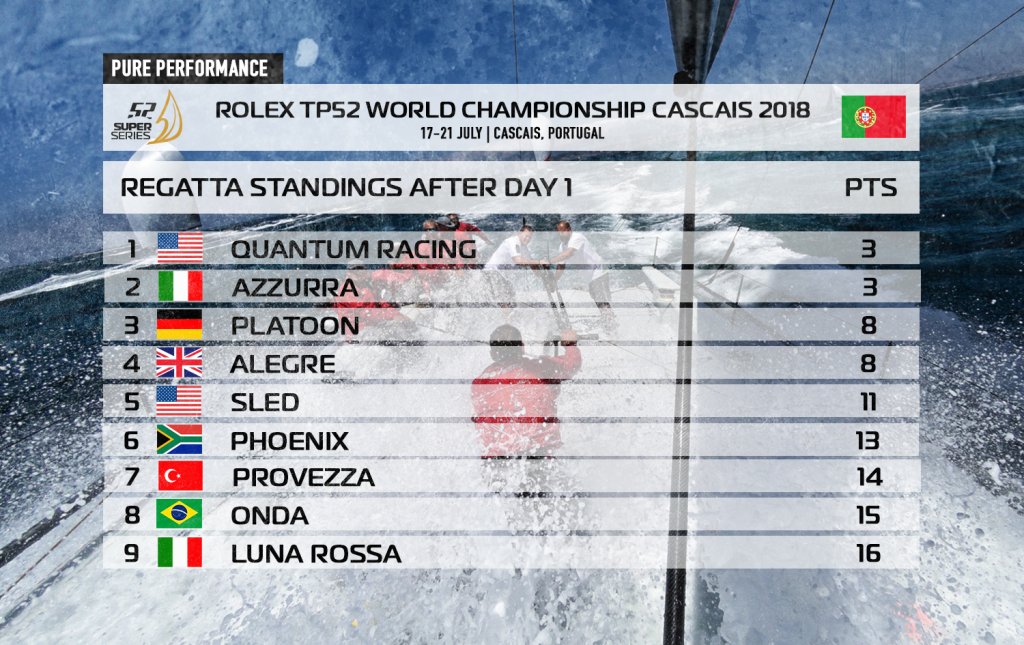