A second race win in succession, gained from the only race of the day, sees Azzurra top the leaderboard at the 52 US Championships in Miami, now leading Quantum Racing on countback. 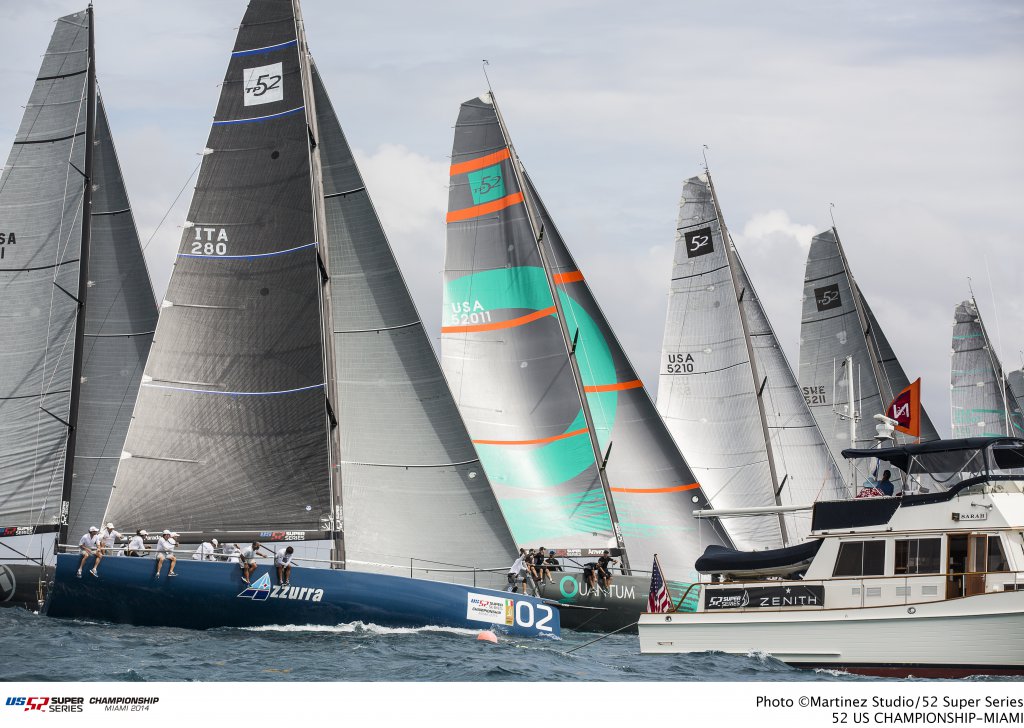 Although three windward leeward contests were scheduled Thursday on the strength of a favourable forecast for 13-18kts S’ly winds, the race committee made the prudent decision to send the fleet ashore on notification that an expected weather front had accelerated and was due to bring very strong, dangerous thunder squalls with the possibility of tornados.

Following on from their race win Wednesday afternoon in lighter breezes, Azzurra were on impressive form. Racing more in their preferred wind range, the team which is skippered by Guillermo Parada (ARG) made the start that they wanted, at the committee boat end of the line and were then able to work the favoured right side of the course.

Azzurra lead around the top, windward mark with a slight margin over the IRC optimised pair Interlodge and Vesper with Quantum Racing, always a threat, in fourth. 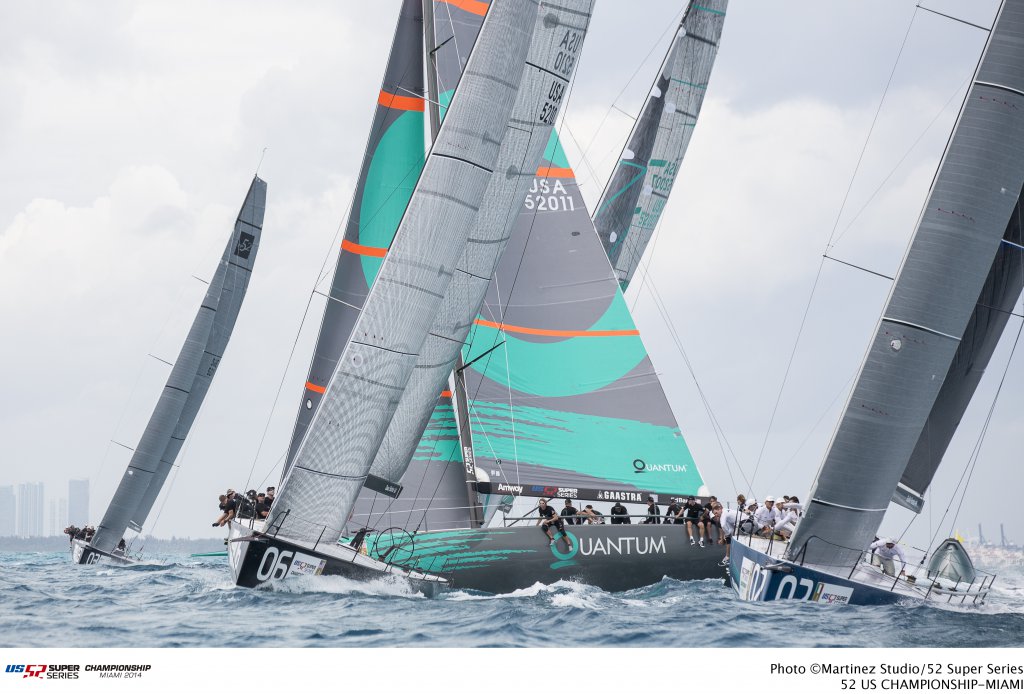 Azzurra had built themselves a comfortable lead by the leeward gate and were able to keep control of the main group. Believing that the breeze had moved as far right as it would, Quantum Racing broke and took their chances left of middle on the second upwind – erring away from the leaders’ track –and were rewarded with a favourable approach to the final turn, gaining to second place.

A swift gybe set on to a sustained gust from the top mark saw a great recovery from Rán Racing. Sixth at the final turn, they were within centimetres of catching third placed Interlodge on the line.

Confidence is a key strength for the Azzurra team and with two good wins back to back, the Roemmers’ family team which races for the Yacht Club Costa Smeralda are on song here, certainly in their preferred conditions today.

“It would have been good to race three races today but there is also an element that some of our guys hold a belief that you are only ever as good as your last race, but certainly we sailed well today. Everything was nicely controlled and we had the sense that we were always working to our game plan.” Recalled Azzurra’s trimmer Simon Fry.

Parada, Azzurra’s skipper added: “It was a beautiful race, under beautiful conditions to sail a TP52, planing downwind at 18 knots. Our crew work was very good, Francesco (Bruni, starting helmsman) had an excellent start, Vasco made very good tactical calls and the boat was fast. It’s pity we couldn’t continue due to the tornado warning. At least, we took the lead of the championship, with a good outlook for the rest of the week. The feeling is positive and we are optimistic we can keep on performing this way.”

We got a little bit tangled up with Hooligan on the start line and ended up in the opposite direction to what we wanted to but still came out OK in the pack. Downwind the gybe set worked but the IRC boats are pretty quick downwind, especially in the uprange pressure. Second beat was just epic. I was nervous but the breeze came on for them and so coming out with a second place was pretty good.
Ed Reynolds (USA) project manager Quantum Racing (USA)

I think you can see that the boats with the bigger prod and a little more sail area are quick downwind in that. We always felt we had a little something extra when it is below 12kts, when it is above that then Rán Racing and Azzurra seem more comfortable.
It is pretty tight at the top just like every single event seems to be. Azzurra have been our rivals since the days of Matador and our guys have the utmost respect for them. Anytime they can get lit up, they are great sailors, well prepared, everything about them is good.
Ed Reynolds (USA) project manager Quantum Racing (USA)

Juan Vila (ESP) navigator Quantum Racing (USA), on the choice to go left on the second beat which gained them two places:

We left the (leeward) mark with a nice righty but we wanted to take our chances to take some boats, and it did not look bad to stay on starboard for a while and then we just waited for the breeze to come back left. We had a good lift then that got us a back to the fleet, so that was a good shift.
Terry and I had a long chat about it and with the breeze so far right at the bottom mark we did think it would come back left. And I worked. The races are open and there are so many good boats now with good speeds, all are well sailed.
It is always interesting here, every day is looking like different conditions. Today it was S’ly tomorrow will be N’ly and then NE’ly with some breeze.

We had a very good race. We started at the boat, duking it out with Quantum Racing and it was an even start really, we were good off the line and it was pretty much us and Quantum until the IRC duo started to make their presence felt and then it was ‘do we race against Quantum or just focus on getting away at the top mark?’ And we just sneaked ahead of Interlodge and Vesper and on the first run we sailed pretty well building a lead to defend.
It was very cool at the back of the boat, there were no fractious voices.
Simon Fry (GBR) trimmer Azzurra (ITA)

On confidence in a team:

I think it is interesting. We have had a discussion about momentum in sport. Some people were saying it doesn’t exist. But then for some of our crew you are only as good as your last race.