Turkish Delight on the Bay of Palma as Popular Provezza Win

(Friday 28th July, Puerto Portals) – They have led four of this season’s five regattas and twice been within touching distance of overall victory on the last day, but today when they crossed the finish line of the what proved to be the last race of Puerto Portals 52 SUPER SERIES Sailing Week Ergin Imre’s Provezza team finally closed the deal and won their first ever regatta title in their five years on the 52 SUPER SERIES. 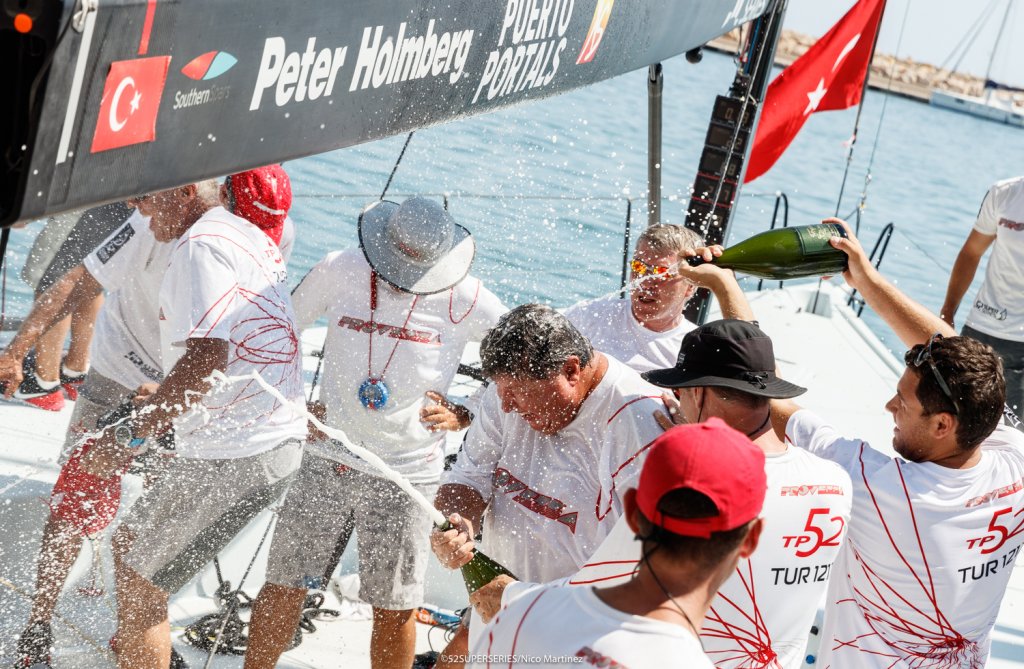 Popular Turkish owner Imre has owned nine different Provezza race boats in more than 30 years of campaigning, dating back to IOR Admiral’s Cuppers and Two Tonners. But his win today on the Bay of Palma is made all the more special as they have been so close on two occasions this season. They led into the final day in Key West in January but botched the start of the first race and dropped from contention. And last month they fleetingly led the final run of the last race which would have given them the title in Porto Cervo until a clip opened and they could not trim their kite on, ceding the title to Rán Racing.

Imre ensured they had their requisite boxes of Turkish Delight on board but had refused to sanction ordering champagne until they were on their on their triumphant way back to the marina.

Their win adds to their team’s family history on the Bay of Palma, winning the Copa del Rey here exactly 20 years ago next week. And it was at the Royal Cup in Palma in 2012, the inaugural year of the 52 SUPER SERIES that Imre and his team dipped a toe in the water with their first TP52, the former Cristabella. Their crew, with Tony Rey calling tactics, America’s Cup winner Peter Holmberg steering from the beginning of this season, and the ‘Wizard of Palma Bay’ Nacho Postigo as navigator has been consistently among the top contenders. They have won four podium places this season and last. Their family owned Dragon Provezza also recently won the Dragon World Championship sailed by Simon Fry – downwind trimmer on the TP52 former helm Andy Beadsworth and Ali Tezdiker.

“In the beginning, we never hoped that one day we would win a regatta.” Said a delighted Imre today, “But after building the new boat we decided that we should have the aim of winning a regatta. Now I don’t know what else we can win, maybe we can win another regatta. It would be great to win the circuit, but it’s really tough.”

They led into the final day with a cushion of three points courtesy of a first and a second place from yesterday’s three race day, but in no small way also due to a remarkable recovery in the third contest. Over the start line early, they were also penalised and so started last up the first beat. But with an incredible fight back Provezza stole fifth on the finish line, showing the hallmarks and tenacity of regatta champions. 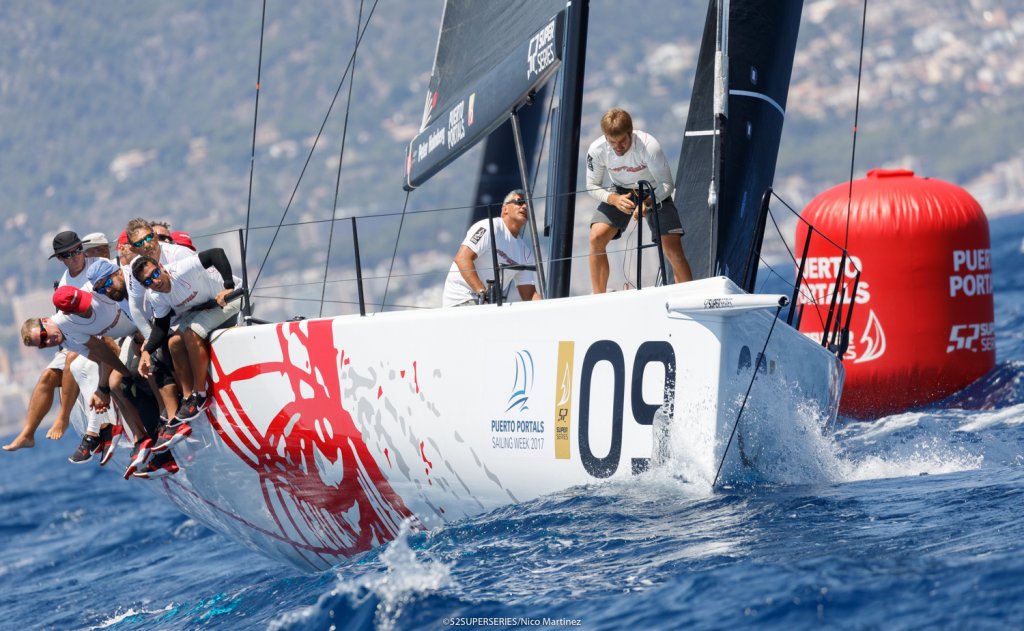 Of the emotional rollercoaster which this circuit has been at times for the Provezza team, missing the overall podium on the last day last season by seven points only, tactician Tony Rey smiled on the dock in the Marina Portals:

“I try not to let the highs get too high or the lows get too low, otherwise I’d have heart failure! It’s great to enjoy this win, we all deserve it, and I could not be more proud of Ergin Imre. It’s a privilege to get to do what we do and it’s an honour to do it with him. He’s an absolute gentleman and owner. He gives us the tools to be able to do this. And the important thing is we had the boxes of Turkish Delight onboard today and they were good luck so now we’ve decided to have them on board every race from now on!”

“It’s been a quirky season trying to go faster all the time, and it’s been a race to the top to see who can get faster–fastest! So we’ve been able to change our processes to improve how we sail the boat in the last month our so. We had a minor breakthrough in our rig setup and it’s just little things put together. Peter Holmberg is doing a great job on the start, Simon Fry trimming downwind, moving the weight around on the boat more than we ever have before… it’s just little stuff that’s come together at the right time!”

Underlining once again how this is the most open and most competitive season ever in the five years of the 52 SUPER SERIES, Provezza becomes the fifth different TP52 to win over the five regattas so far this season, joining Quantum Racing which won in Key West, Azzurra in Miami, Platoon at the World Championships in Scarlino and more recently Rán Racing. The victors in Porto Cervo led early in this regatta but finish fifth overall. Quantum Racing finished with a more characteristic pair of wins to take second overall at the Puerto Portals 52 SUPER SERIES Sailing Week, two points behind Provezza and tied on the same tally as Azzurra. The Portals based team take third only on countback and just four points separate the top four boats. 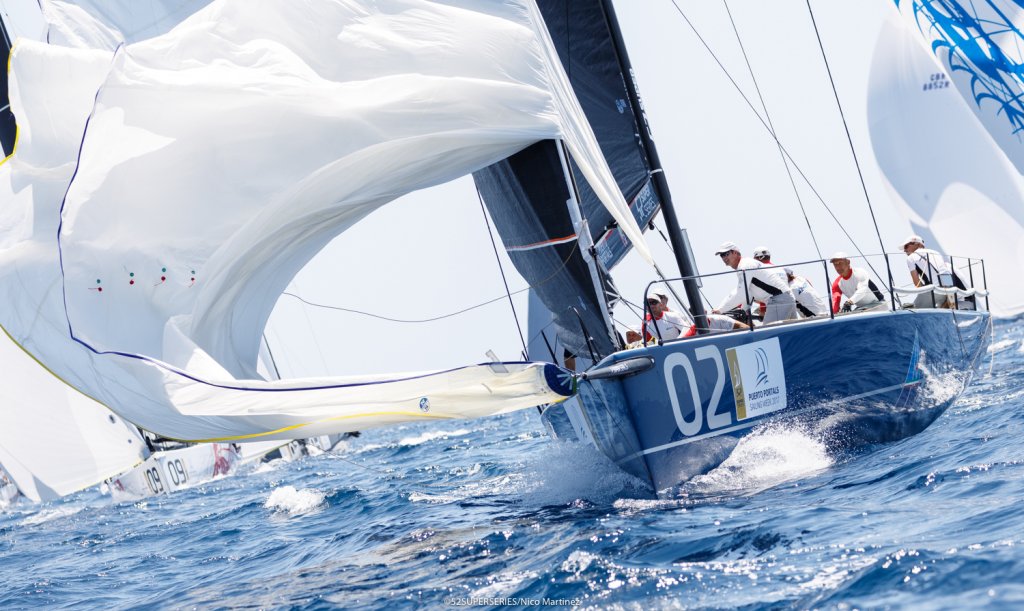 After 44 races over five regattas, Mahón, Menorca next month looks set to host the most competitive season title showdown ever, a three-cornered battle between Azzurra, who holds a slender three-point lead over second-placed Platoon – fourth placed finisher here – and Quantum Racing, the defending 52 SUPER SERIES champions who are six points adrift. 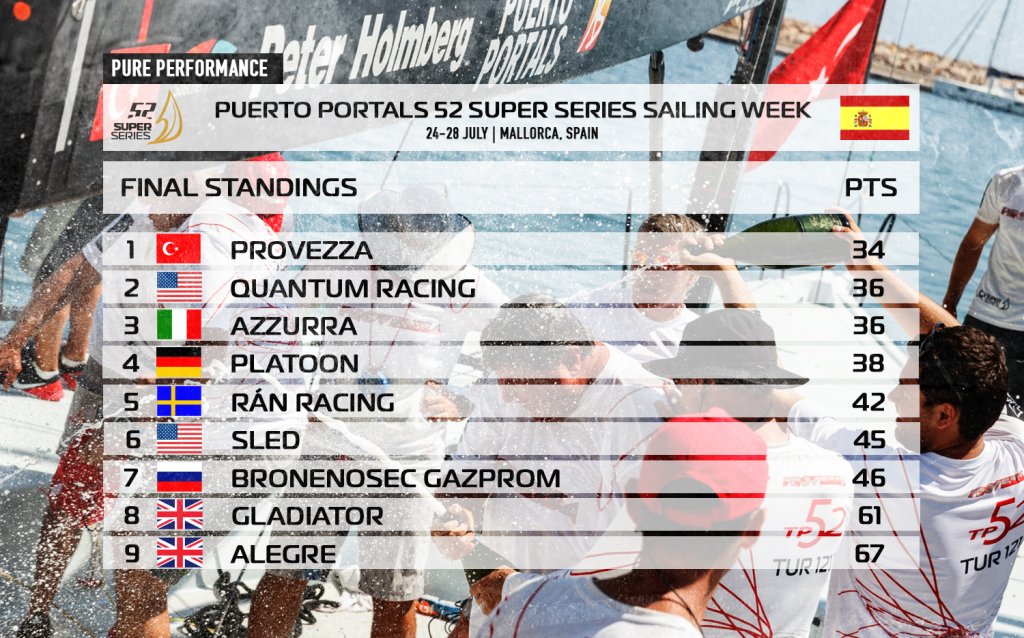 “It always feels better to end strong! To want to keep sailing instead of thinking whew at least we got that over with. It’s really tough here, everyone’s really good! You just have to keep plugging along and trying to do the best you can and thankfully we figured a couple things out.

Puerto Portals is always a lovely spot. Everywhere we’ve been has been great and they all have their own character and personality and having all the boats here and the party right here is really special because it keeps us all together. Even the containers are right here which we really like because it’s just one big family!

We’re thinking wow-it’s going to be a battle! We’re close, with Platoon and Azzurra, Provezza’s right there too, every race things’ are gonna change it’s going to keep us busy so we’ll just take it one race at a time.”

“Honestly its fairly hard sailing this boat, learning this boat. It’s been a quirky season trying to go faster all the time, and it’s been a race to the top to see who can get faster–fastest! So we’ve been able to change our processes to improve how we sail the boat in the last month our so. Had a minor breakthrough in our rig setup and it’s just little things put together. Peter Holmberg doing a great job on the start, Simon Fry trimming downwind, moving the weight around on the boat more than we ever have before… it’s just little stuff that’s come together at the right time!

It’s been so tight-we had 9 races over 5 days, it was a lot about being patient even when you’re in a tough spot on the race track, trying to let it play out before you pass and not panicking and swing for the fences on the first shift.”

“At this stage last year we were 14 points behind Quantum, and the last regatta we started building the new season. Think we did a good job and now we are there, close to them, close to Platoon who are doing a fantastic job that’s no surprise. And we are happy to be leading that means we’re being consistent, we will do our best and see what happens. We need to do a little bit more work for Mahón but we are ready and proud about our job so far.

It was tough because it was not exactly the usual Portals. It was a little different conditions, we had some clouds in the beginning of the week, which is impossible here in Palma. And today everyone was expecting a 14 knot sea breeze and instead it was quite light and hard to decide where to start. Today was a tough race but again it’s not a matter of one race but the whole season and we aver very happy with where we are now.

I think today, everybody in this harbor is happy for the crew of Provezza. The owner has sailed this boat for many years and this is their first win, and they deserve this win, maybe also earlier, but this week they did just the perfect week, the lucky stars aligned and it was perfect for them. It’s strange to say because everybody wants to win but we are happy for them, that’s a fantastic result and great for the class it shows that everybody can win in this class, it is the best class in the world”