(Saturday 20th May, Scarlino) – Harm Müller-Spreer’s Platoon crew got the better of the five-time title holders Quantum Racing during an exciting winner takes all final day showdown to win the Rolex TP52 World Championship title for the first time. Their seemingly unerring consistency across the challenging, hard-to-read conditions proved telling. Though they did not win a race, only once in eight contests did Platoon finish out of the top three, counting five second places. Third in 2008, losing out on the final day in Puerto Portals to finish third, this time the Platoon crew stayed super focused and closed out their first world title together.

“I’m delighted. I don’t quite know what to say. I have been racing for the best part of 40 years and this is a great world title to win. It is the most competitive, toughest class there is with Olympic medallists, America’s Cup winners and so on all the way through it so this is very, very special. Today the worst thing we could have done was to beat ourselves, but we stuck to what we have been doing all week. We had to stay cool and not get distracted, and we did that.” said Müller-Spreer. 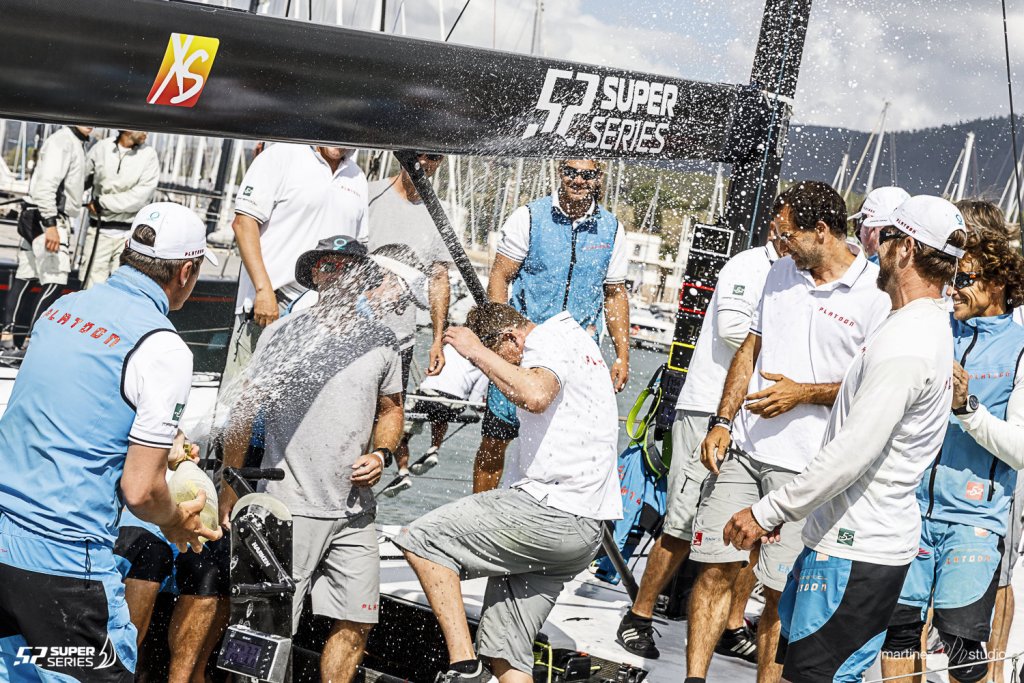 A moment of jubilation onboard Platoon upon arriving to the docks.

With the last day programme on the waters off Scarlino, Tuscany cut to just one race as the WNW’ly breeze took time to build the regatta leaders Platoon started the grand finale with a lead of two points over Quantum Racing. The defending world champions made the better start, Platoon faltering momentarily. But ice cool tactician John Kostecki and strategist Jordi Calafat stuck to Platoon’s game plan, investing progressively in the right side, staying out of the fray, sailing clean lanes to allow their speed edge – particularly downwind – to work.

While Azzurra enhanced their early lead by getting to the paying, favoured right side of the first beat, Quantum Racing found themselves sandwiched between two other boats, unable to get there in time. In the 14-16kts breeze, Platoon were quick upwind and rounded the first windward turn in third, already seemingly with their hands on the world title. As Azzurra went on to win, Platoon passed Bronenosec on the second round to win the world championship title by seven points from Quantum Racing, who won the title last year in Menorca. 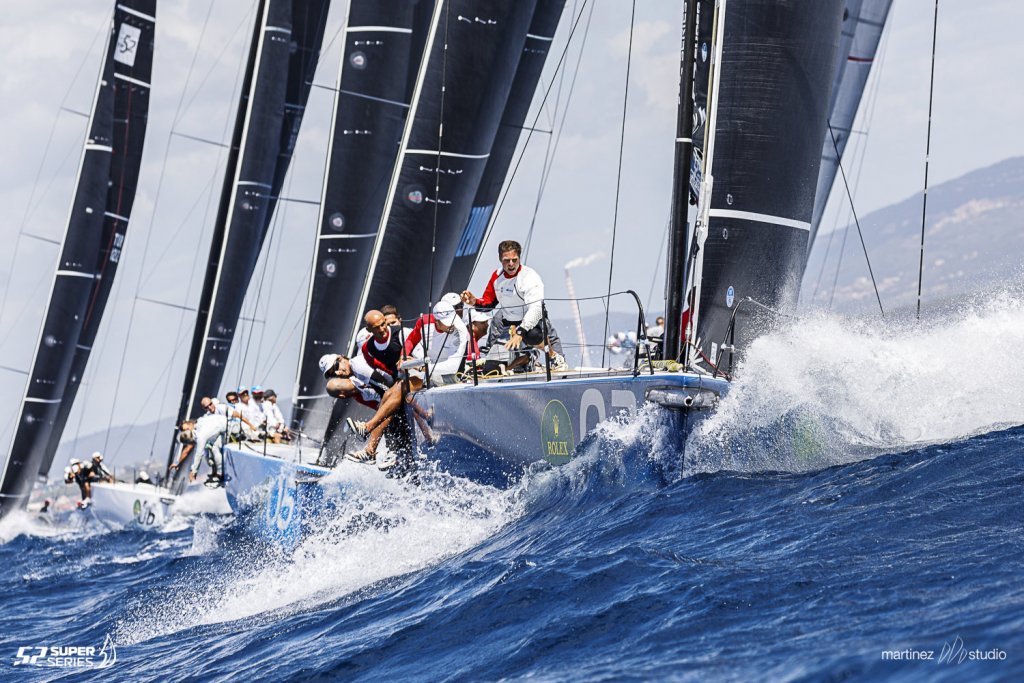 Azzurra’s win in the final race put them onto the podium.

Platoon’s consistency across the wind range – 5-18kts over their eight races sailed – proved convincing. Only in one heat did Müller-Spreer’s German-flagged team finish outside the top three, a hard earned sixth converted from an early race tenth place rounding proving its value in the winning scoreline.

The vastly experienced German owner-driver returned to the TP52 class in 2015 joining the 52 SUPER SERIES with a Vrolijk designed successor to his previous Platoons after a seven year hiatus finishing fourth overall. Technical changes to the boat last winter –bolstering his team line up with America’s Cup winner John Kostecki as tactician from the back end of last season, bringing on Dirk De Ridder as mainsheet trimmer from the beginning 2017, and having Pepe Ribes as boat captain and pitman – have stabilised the team’s confidence, but more importantly improved their speed. 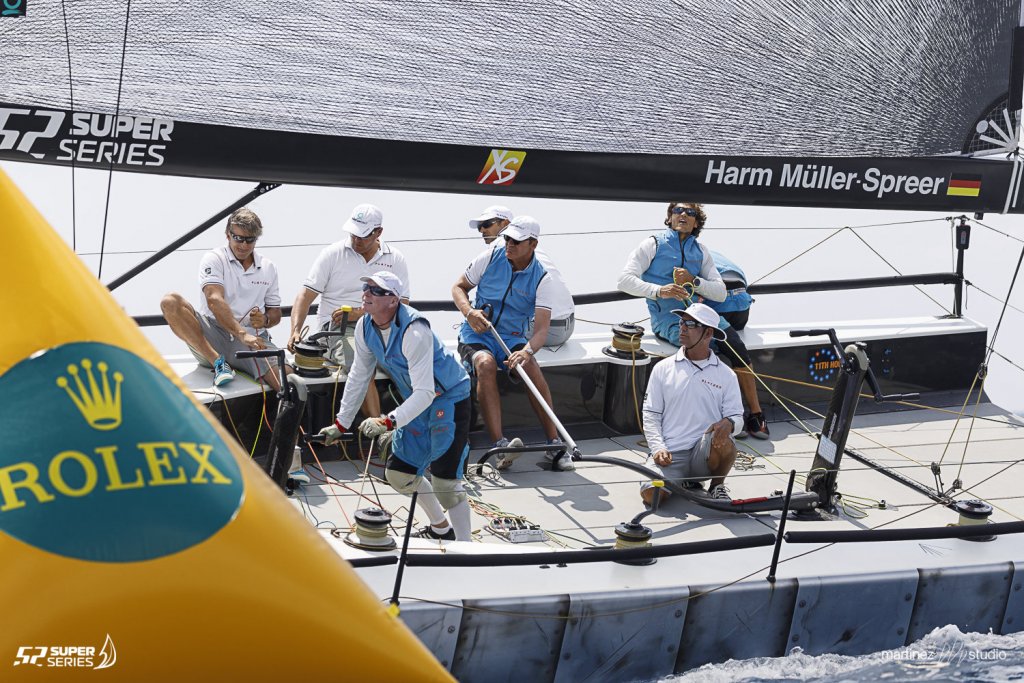 An incredibly focussed and determined Platoon crew win the prize.

As part of the three-boat Quantum Sails programme, along with Gladiator and Quantum Racing, the free flow of knowledge and information between the trio and the empirical, comprehensive package of data and performance analysis has been an important component in Platoon’s consistency this season. They were second in Key West in January and second in Miami in March – behind Quantum Racing and Azzurra respectively – coming to Scarlino as the crew most likely to break the world title monopoly of three winners since 2007: Quantum Racing in 2016, 2014, 2011, 2010 and 2008, Azzurra/Matador in 2009 and 2015, and Rán Racing in 2013.

Ross Halcrow, Platoon’s Kiwi trimmer who won the TP52 global title with Artemis in 2007, summed up:

“We have come a long way with the three-boat programme along with Quantum and Gladiator. This week was our week. We were third row coming off the start line. But we wanted to tack off early and get right. We had control of Quantum early on and then it was about letting the boat do its thing.

You always want to be sailing with John Kostecki, not against him. The game he plays is never hitting the corners, playing it safe and consistency will win you the regatta.”

“This is a dream come true for me. I started ten years ago with the Bríbon and you always have the dream to win the world title. This is the highest level monohull circuit in the world and so this a dream come true. It is an incredible result. We sailed really, really steady and conservative. We have a fast boat. We did not take too many risks and that was one of the keys to being on top of the world.” 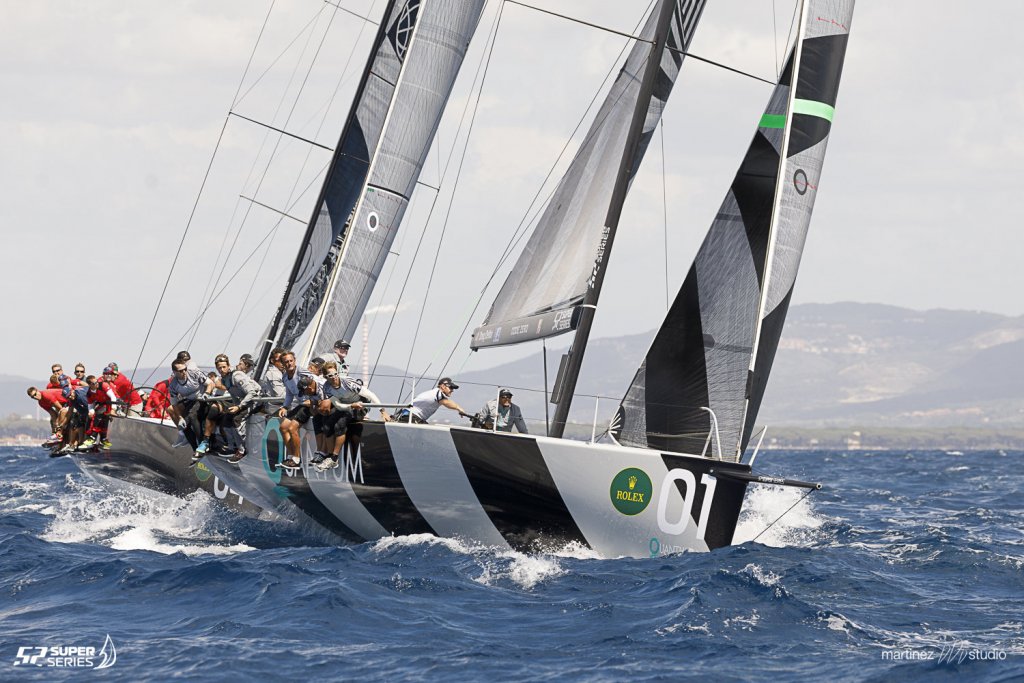 Quantum Racing were title contenders right up until the final race.

It was a disappointing outcome for Quantum Racing and for hard driving tactician Terry Hutchinson.

At the theoretical midpoint of the season, with three of the six regattas sailed, Platoon lead the 52 SUPER SERIES by four points going into next month’s Audi 52 SUPER SERIES Sailing Week in Porto Cervo. Azzurra lie second and Quantum Racing third, 14pts off the lead. 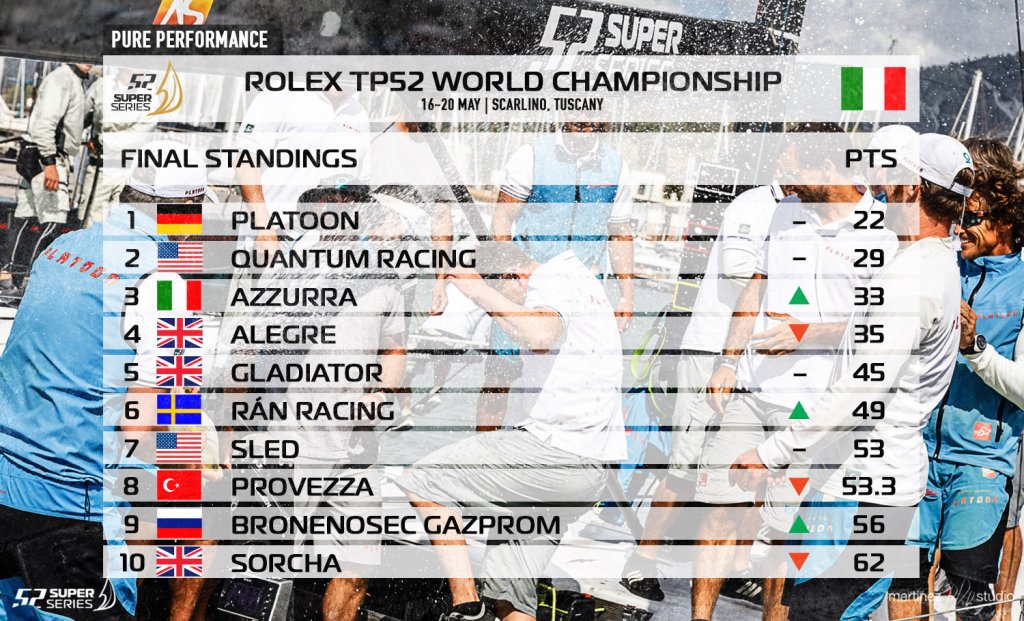