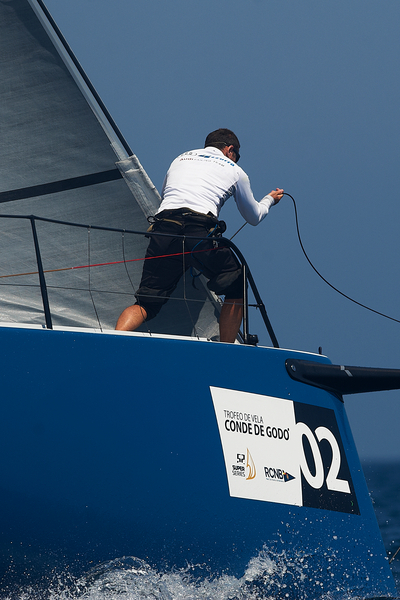 All of the signs today are that Alberto Roemmers crew, which sails under the flag of Sardinia’s Yacht Club Costa Smeralda, have a potent enough weapon in the form of their new Botin Partners design, but it was their good starting, accurate tactics and crisp boathandling which contributed more to their winning guns today. While they were very much on their game from the start of Race 1, their rivals could just not find the early season consistency to match them.

With five changes in their sailing team line up since winning the World Chmpionships and the Audi MedCup Circuit last year, Quantum Racing perhaps inevitably looked like they have yet to fully gel when held up in strict comparison with the advantage held by Audi Azzurra Sailing Team which has a core speed group which have been together for three years. But skipper-helm Ed Baird pointed to key decisions and small mistakes that they made today rather than crew work.

Audi Azzurra Sailing Team lead at every mark of Race 1, but each of the first windward legs were extremely tight. Tony Langley and crew on Gladiator pushed Niklas Zennström’s Rán hard around the first windward mark, with Quantum Racing rounding fourth.
Though the Garbi sea breeze was a little patchy at times, especially on the first downwind, the Azzurra team were able to stay ahead to the finish with Rán second. Gladiator crossed third but were penalised at the line for passing too close to Quantum Racing on their final tight cross before the line.

The breeze increased slightly and was a little more evenly spread across the race area for the second windward-leeward contest. With their three rivals tussling for the right, committee boat end of the start line, the Azzurra squad executed a nice time on distance start at the opposite, pin end of the start line. Again they lead at the top mark and went on to a second winning gun.

In the third race pre-start Quantum Racing and Audi Azzzurra Sailing Team engaged in a brief interlude of ‘handbags’ – match-race style circling – before Azzurra again broke to the very opposite end of the start line. This time they were the lone wolves on the inshore, right side upwind while the other trio initially hunted slightly more left, offshore. They lead again, narrowly at the top mark but after a prominent shift to the right Rán gybe set first and by the second time of crossing, lead for the first time. Downwind in the fresher, colder 14-17kts breeze, Rán appeared to have the speed advantage that many have previously observed. Zennström and crew, with Adrian Stead calling tactics lie second, one point behind Azzurra on 5pts with Quantum Racing third on 9pts and Gladiator on 12pts.

Audi Sailing Team powered by ALL4ONE are expected to join the regatta as of tomorrow (Friday) after making good an unforeseen repair today.

It could hardly have gone better for a first day in the series – well maybe a little – but we were leading the final race and Rán proved to be pretty fast downwind in some conditions and we struggled to keep them back. They did a fantastic last race when we made a couple of mistakes. But we cannot complain about today.
It feels very different to the start of last season. This boat is more an all-round boat and we have no speed issues in any conditions. We are matching the speed of the top guys in the conditions so far and sometimes we even have an edge. We felt pretty weak at the beginning of last season, we knew we had some problems then.
Francesco Bruni (ITA), Audi Azzurra Sailing Team (ITA)

It is very close, considering there are not that many boats it is close. And it will be for the rest of the season. Upwind everyone is very close. We are quick downwind in that 15-16kts stuff. The boat gets up when we arc it up a little.
Andy Hemmings (GBR), Rán

We are obviously disappointed it did not go a little better. We had out moments that did not work out for us. The Azzurra guys sailed really well in the first two races and in the third race Rán did a great job. We made mistakes in a few different places. The first race I did not get off the start line very well. The second race we were close, but just a tiny bit behind the blue boat and they pushed us back and we got Rán in between us. We thought we had done the job on the start but the right worked on the right. It is nothing to do with new crew, it is decision making and placement, and in the case of Rán this is the conditions they love the most, very smooth water and the potential to plane downwind. They love that. They passed Azzurra downwind, but every day is different.
Ed Baird (USA) Quantum Racing (USA)