(Thursday 18th July, Cascais) – After a disappointing Puerto Sherry regatta last month when they finished seventh overall, their worst regatta result in the history of the world’s leading grand prix monohull circuit, Quantum Racing are on fire in the big winds and waves of the Atlantic off Cascais and lead the third regatta of the season by six points.

The 2018 52 SUPER SERIES conclusively won the first race today at the Cascais 52 SUPER SERIES Sailing Week, at one point over 500 metres ahead of second while racing in winds of more than 25kts and surfing to a new speed record for the boat of over 25kts.

The second race was much less straightforward with the windward mark set closer to the land. Offshore, to the left of the upwind, the breeze held more solid. But inshore the leaders saw shifts of more than 40 degrees, lulls as light as eight knots and still gusts to more than 20.

Hasso Plattner’s Phoenix crew held their composure to deliver the race win which unfortunately eluded them yesterday after they had led all the way to the final gybes of the second run. It was a well earned first race victory on the circuit for the hugely experienced owner, Plattner, in demanding conditions.

Quantum Racing finished fourth, losing out on the second beat when conditions were funky, but their consistency across the six races sailed so far has seen them climb back into contention for the 2019 circuit title. When they arrived here in Portugal at the weekend they were 14 points behind the season leader Provezza.

Now, today, as the circuit passed the mid-point of the 2019 season – Race 6 being the 23rd contest of the year – Azzurra have the overall lead on 89 points, but Quantum Racing – ominously perhaps – are now just four points behind, locked on the same tally as Platoon and Provezza.

“It was a tricky day. Where the race course is set up at the top it is really random. I think we had five knots of breeze to 25 knots of breeze. And shifts that were more than 60 degrees. So like that it is just about being patient and knowing which one you really wanted to use. Overall our guys did a great job today in these challenging conditions. We had some amazingly fun donwnwinds,” Cameron Appleton the Quantum Racing tactician said. “We knew we would just need to chip away, we had a bad one in Puerto Sherry, and so we are feeling a bit more comfortable here, I am especially, remembering that we do know how to sail. We just needed to trust in the group, the team and what we are about.”

Vladimir Liubomirov’s Bronenosec, with Sime Fantela on the helm and Morgan Larson are up on to the podium for the regatta after a solid pair of third places today. It was a less profitable day for Platoon and Provezza, the top two teams on the overall 2019 standings coming into this event. Platoon had to do a penalty in the first race and finished seventh which they paired to a fifth in the second heat. Provezza, winners last month in Puerto Sherry were second to Quantum but then they too had a taste of life at the very back of the fleet.

The forecast seems to promise wind right through to Saturday when the regatta finishes. 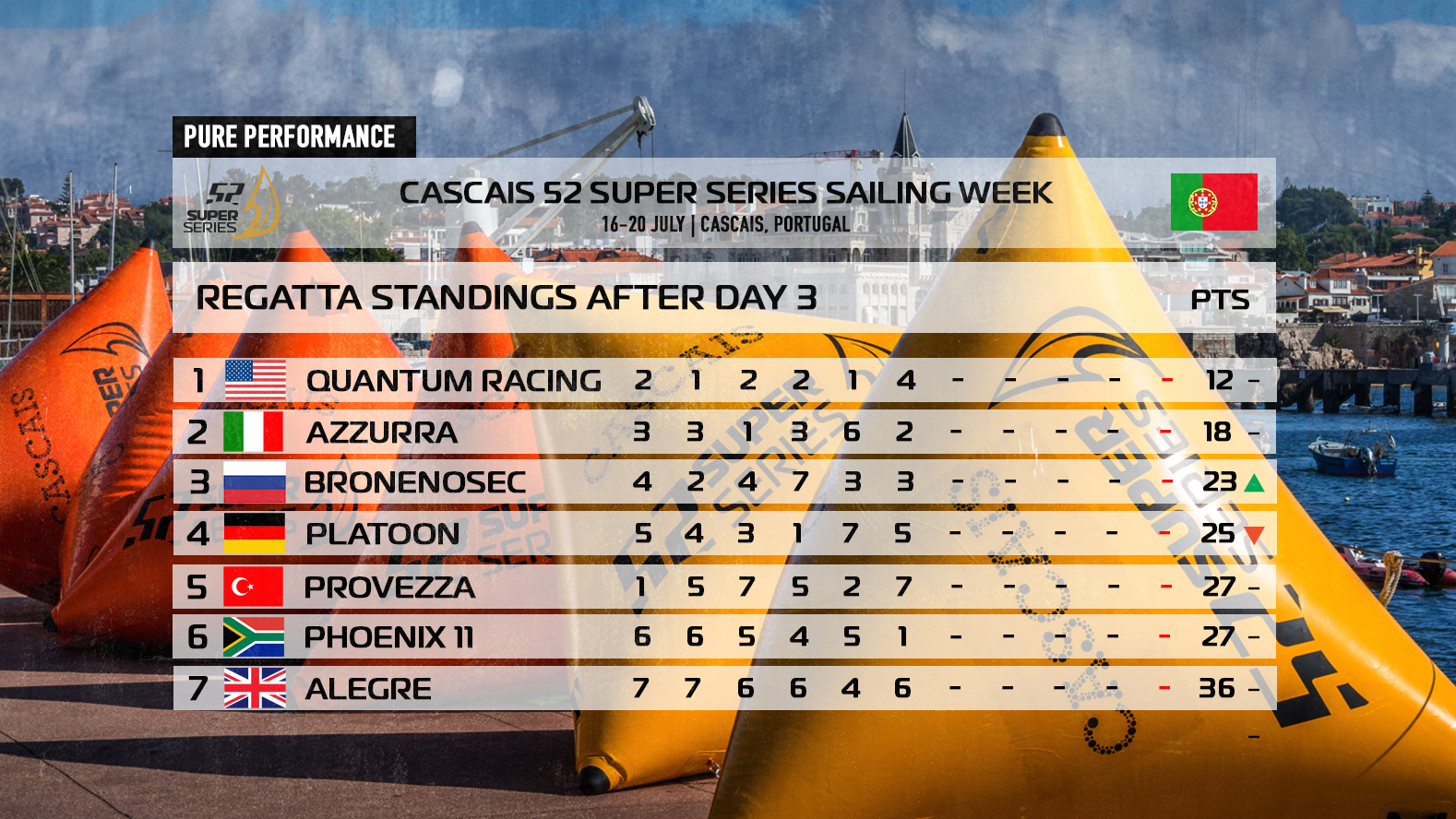