Solid Quantum Racing Are Holding Off Consistent Rivals in Cascais

(Wednesday 17th July, Cascais) – Two solid second places from the windiest day of racing so far of the 2019 52 SUPER SERIES sees Quantum Racing three points clear at the top of the Cascais 52 SUPER SERIES Sailing Week.  Although the winds topped 25 knots at times and the TP52 fleet were in their element, long, fast downwinds, and muscular, tough upwinds – the pattern to the breezes was not easy to read. Winning proved more complex than simply claiming the key berth at the signal boat, taking the favoured right side of the course and then protecting.

In the prevailing NW’ly wind, the approach to the top mark – the final third of the beat – can often be difficult. The breeze swirls off the land, it bends around the point and today’s second race in particular saw an especially testing period as the whole fleet approached the first turn.

But for all that, there have now been four different winners from the four races so far at the Cascais 52 SUPER SERIES Sailing Week. The team that won the Rolex TP52 World Championship here last year stand out for their consistency so far. They are very much back on form. That said, all three top-placed boats on the general classification today netted a four-point average – Azzurra going 1,3 and Platoon 3,1.

“It is always tricky at the top mark in these gusty conditions,” Quantum Racing navigator Juan Vila recalled, “But we are having fun in the heavy breeze conditions. For us we managed to sail consistently and so that makes us happy with how the day went. We know that the days will come when it does not go as well as it has so far.”

Their 2,1,2,2 sequence is their strongest of the 52 SUPER SERIES so far this season, Vila maintaining that they have learned from their poorer races this season and that changes to the crew are now working well.

“We have learned from our past mistakes, from the events that have not been so good. The good thing about these regattas is that they maybe showed some weaknesses we had. We are learning the crew better and that is a big step forwards.”

Azzurra won the first race after staking an early claim to the right, starting off at the committee boat end of the line and unfolding the classic Cascais winning strategy. They stormed down the second run in the second race for their third, the reverse sequence of the Platoon team that sailed a great final run to go from third to win.

Hasso Plattner’s Phoenix 11 led off the pin end of the line on the second race and made the best job of the testing approach to the windward mark, profiting from the breeze being in a left phase. They were well clear going down the final run, but Quantum Racing and Platoon gybed inside them and as they tried to respond with a fast second gybe, Phoenix lost their two rivals and then Azzurra added insult to injury sliding through to steal third – a great recovery.

“I did a terrible start in the second race, and we were at the back, forced to catch up. Luckily we saved a third, which keeps us in the game,” grinned Guilermo Parada, skipper helm of the Azzurra. “And the circuit standings are closed right up again. Now here we are half way through the season and it is like we are all starting over from the beginning.” 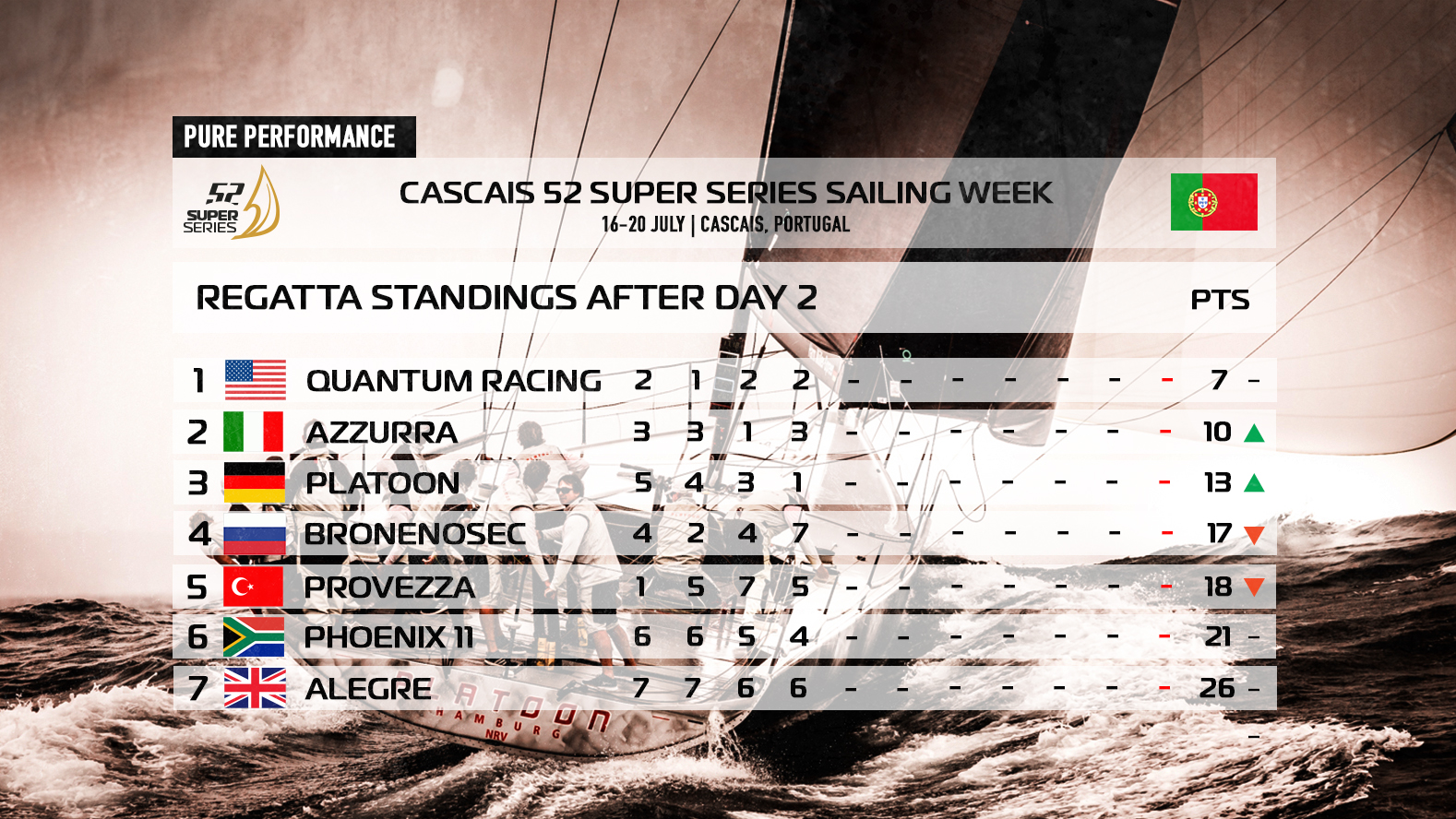