From the biggest and most competitive fleet yet, Niklas Zennström and the Rán Racing team won the first regatta title of the 2015 SUPER SERIES when they kept their focus under the weight of final day pressure.

With Zennström steering and tactician Morgan Larson and strategist Adam Beashel they achieved the required balance between proactive attack and consolidation to convert this morning’s six points margin to finish ahead of rivals Alegre, Andy Soriano’s series debutants.

Valencia’s Malvarrosa Beach race course delivered perfect conditions for the super Saturday showdown, one light seabreeze contest in 6-8kts and a breezier finale in 14-16kts to complete a maximum possible complement of 11 races.

Rán Racing laid the foundations of their title victory when started with three second places and a race win. Then they had to come right back on form after a wobbly three race Thursday when they added a weighty 22 points to their scorline. Showing considerable composure they made a necessary recovery in the first contest today, rising from ninth to sixth. And in the second race Rán did what they had to do, sticking close to their rivals to clinch their first regatta title since winning the TP52 World Championships in Miami in 2013.

The international team which races under Zennström’s Swedish flag finally broke their 2014 hoodo. Since they joined the circuit in 2011 Rán have won a regatta each year until last year when they won almost all the practice races. They add to regatta titles in 2011 Barcelona in their first year on the MedCup, Palma’s Royal Cup in 2102 the first year of the 52 SUPER SERIES and the world title in 2013. But last year they were the team which won almost all the practice races, often lead regattas but never quite sealed the deal. In is particularly pleasing for the tall Swede to come out on top of this regatta which confirms the 52 SUPER SERIES, of which he is one of the founding, visionary stakeholders, to be in robust health.

Its fantastic to win this first regatta of the year with this bigger fleet. Its been a really tough week and we have been fighting hard so we are very pleased. We have been working really hard as a team, winning together and we have been learning about the new boat and Morgan Larson, Adam Beashel and Steve Hayles in the afterguard have done a really good job calling the right shots, we had good boat speed and good starts.

We haven’t had so much time to get up to speed with the boat, we just had a few days commissioning the boat so this was the first regatta, but Adam sailed with us at a few regattas last year and Morgan sailed with us in 2011 so we all know each other well.

There are 12 boats here which can win regattas, so the boat which wins this year is going to be a really good victory. All of these boats can win.
Niklas Zennström, owner-driver, Rán Racing

Reflecting on the growth of the circuit he said:

It’s amazing. In 2012 we were basically only four boats and now this is the best monohull racing in the world. We will get more and more boats and owners joining and racing at very high levels. The sailing this week has been amazing. It is such a good fleet.
Niklas Zennström, owner-driver, Rán Racing

Alegre, Andy Soriano’s programme, proved they have all the talent and hardware to win on the 52 SUPER SERIES. They lead after Thursday but then had their own bogey day Friday with an eighth and ninth. With tactician John Kostecki and strategist Kelvin Harrap placing the boat consistently well and no shortage of speed across the wind range, they highlight themselves as 52 SUPER SERIES overall contenders.

I never thought that we would be in second position in this regatta and that we would win the first race of the 52 Super Series. I would be crazy to have thought that. I think we did a good job in the pre-season. We had a very good practice at PalmaVela where we competed with some good teams and gathered valuable information. Finally we had five days hard practice in Valencia before this regatta.

We only really made one mistake it was the fourth day because we weren’t fully focused and when you do something wrong in this fleet it is very expensive.
Andres Soriano, owner-driver, Alegre

The level of racing proved to be above and beyond most expectations. Runners up overall in 2014 Azzurra took time to get firing on all cylinders, finding tiny early mistakes too costly. But today the team of the Roemmers family which sails for the Yacht Club Costa Smeralda finished on the perfect note on which to head to the next regatta on their own Costa Smeralda home waters. Two magical back to back wins brought the biggest smiles back to the Azzurra camp, proving they too are finding their mojo.

As predicted there is very, very little speed differences between the nine newly built and launched TP52s all from the design offices of Botin Partners and Judel/Vrolijk. Rán Racing is from the Vrolijk office, Alegre and third placed Sled from the Spanish Botin team.

A strong fleet is expected for the next regatta of the 2015 season on the Costa Smeralda in two weeks time. 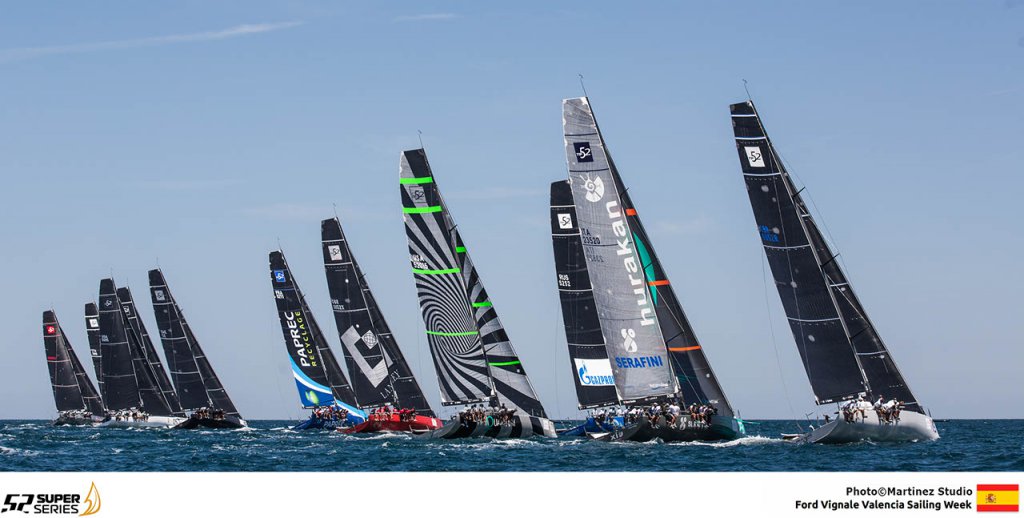 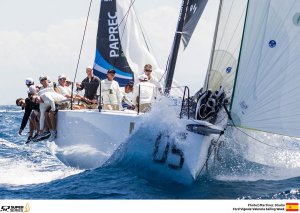 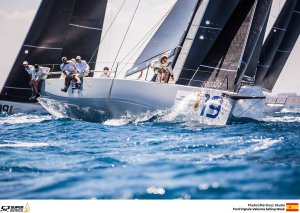 I never thought that we would be in second position in this regatta and that we would win the first race of the 52 Super Series. I would have been crazy to think that. We have done a good job in the pre-season. We had a very good practice at PalmaVela where we competed with some good teams and gathered valuable information. Finally we had a five day hard practice in Valencia before this regatta. We know each other well because we have sailed together a lot, I have sailed with John Kostecki and Kelvin Harrap for a long time so its easy to work in a new boat when the crew all know all each other. Onboard my boat I have a lot of nationalities which I like because its like in my life! We only really made one mistake it was the fourth day because we weren’t fully focused and when you do something wrong in this fleet it is very expensive. Here we have been fighting with Rán and its funny because we have been fighting in all the regattas we have met during the last 6 years.
Andres Soriano (USA) owner-driver Alegre (GBR)

Were ecstatic. The goal was to be in the game. We have a whole list of things we need to work on as I’m sure do the other teams but we are already looking forward to the next event and addressing those and seeing how we go. I think for the most part we did a pretty good job of staying out of trouble going upwind so I think the boat is set up really nicely and Mr Okura does a pretty good job steering the boat. And we feel really comfortable. Downwind to be honest we have got a bit of work to do, we just need more sailing more than anything else. But we are happy.
Ross MacDonald (CAN) tactician Sled (USA)

It was a fantastic day on the water, great to have two races in top end conditions. Finally in the 15-16 knot range when the boats are all moving along real quick. It was nice to have a little more breeze, it felt like that gave the advantage back to our team. The team has been together for a long time. Obviously there have been a few changes but the main one was Adam Beashel and myself but Adam was spot on all week and that was one of the main reasons we won!
Morgan Larson (USA) tactician Rán Racing (SWE)