Niklas Zennström’s Rán Racing are the new leaders of the Gasstra 52 World Championship after they won both of today’s races in great sailing conditions off Miami’s Key Biscayne. 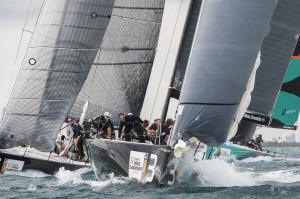 Rán Racing excelled in the stronger breezes, blowing from an offshore direction which brought some fast downwind runs in the puffy, gusty wind which peaked at 22kts in the first race and which eased down to 12-13kts at times in the second as a frontal system moved through.

From the four races sailed so far Rán Racing have won three in a row, whilst Day 1’s strong starters Azzurra did not manage to replicate their same top scoring consistency today. Although they lead early in the first race they were overhauled by Rán Racing and Interlodge on the first run.

At the first leeward mark the reigning 52 SUPER SERIES champions had to take a penalty for infringing Interlodge but they did fight back for a useful third. Then in the second race Azzurra faded to a fifth, their worst score of the regatta so far, which dropped them to second overall, one point behind the new leaders.

Doug DeVos’ Quantum Racing also made points against Azzurra thanks to their solid second and third for the day, holding third overall. But only three points separate Rán Racing from Quantum Racing at the top of the eight boat fleet. 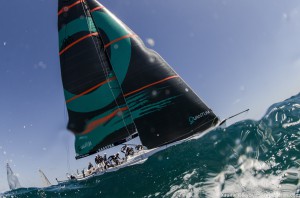 Both races held their own special challenges but Rán Racing’s tactician Adrian Stead was able to stay on top of the changes. They started cleanly in both races and were able to make the key gain at the first leeward gate.

They sailed smartly on the first downwind on the second race when they made big gains against their key rivals when they held patiently out to the right to outstrip Quantum Racing and Azzurra by some distance. Jim Swartz’s Vesper team scored a good second place in that race.

The first two days have followed the expected pattern of different wind conditions each day and further change is anticipated. After a light winds opener, today’s puffy, stronger breezes are expected to be followed Thursday with a light to moderate NW’ly, blowing almost directly off the beach. Rán’s Stead comments:

I am pleased we have won three races on the trot and in that first race we left quite a lot out there on the race track. And now we are back in the running for the worlds and that feels good.

From here we just keep chipping away. We are only four races in to an 11 race series, but today has shown that Quantum Racing and us have come through, we have pulled back some points on Azzurra who had a blinding first day.
Adrian Stead, Rán Racing

It was a really good day for us with two wins. It was pre-frontal with a little bit of cloud action so it was shifty but there was kind of a pattern to it. We had two good starts and so were able to be in the front row off the line both times. The lines were quite short and so it was not easy for all eight boats to get lined up. It seemed OK for us, we were pleased to be in contention at the top marks each time and the guys did a good job on the sets.

Today we were doing the dictating rather than being dictated to as it was in the first race yesterday. It is a good feeling. I am pleased we have won three races on the trot and in that first race we left quite a lot out there on the race track. And now we are back in the running for the worlds and that feels good.

From here we just keep chipping away. We are only four races in to an 11 race series, and today shown that Quantum Racing and us have come through, we have pulled back some points on Azzurra who had a blinding first day. And tomorrow is going to be something different again. We identified at the start of the week that every day is going to be different and its being able to perform equally well every day.
Adrian Stead (GBR), tactician Rán Racing (SWE)

We did not have the best first beat in the first race so that was a big fight back in that, we got a little pinned out there. We thought the breeze was a little more balanced but finally there was a big left shift that came in. We had a great run and came back to second. The second race we lead at the top mark but there was some clouds clearing out and you had to pick a side at the top and we went for the gybe set and unfortunately the guys that held on got the shift ended up gaining a bit.

We are figuring it out. We are starting to put the pieces together a bit now but it is not easy, putting it all together, the sails, the trimming the new keel, we are starting to feel more confident and comfortable.
Andy Horton (USA), strategist Quantum Racing (USA)

It is tough out there. We did not sail particularly well but neither did we sail particularly badly. We lead at the top mark in the first race but there was a big puff and the fleet got down inside us. And then at the bottom mark we had to do a penalty. To be fair we did well to get back into that race. In the second race things did not break our way. We had a half decent start and then ourselves and Quantum gybe set at the top mark but Rán and Vesper just took a lot out of us. They were 200 meters ahead at the bottom gate. And then after that I think we were maybe just trying too hard, looking for the big plays rather than the incremental gains. That goes against the lessons we preach to ourselves.
Simon Fry (GBR), trimmer Azzurra (ITA)