RACE 1: Azzurra first, Quantum last… the battle is on 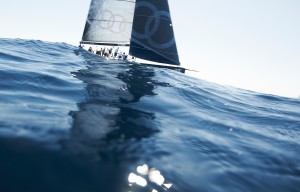 Racing in 12 to 14 kts of NE’ly breeze, an initial match racing skirmish between the two top boats on the standings went the way of the team from the Yacht Club Costa Smeralda who were best of the start line. The duo stuck to the right of the upwind and losy out to Ran and Audi All 4 One who went left and gained.
That worked well agin for Audi All 4One on the second beat and they were able to lead at the top turn, second time up, but Audi Azzurra sailed a great final run, taking Audi All4One at the finish line.