Doug DeVos’ Quantum Racing completed a double title ‘slam dunk’ in the sweltering Miami heat and light winds as they collected the US 52 Championship title with a solid final day and also clinched the US 52 SUPER SERIES title, adding the Miami regatta win to their event victory in Key West in January. 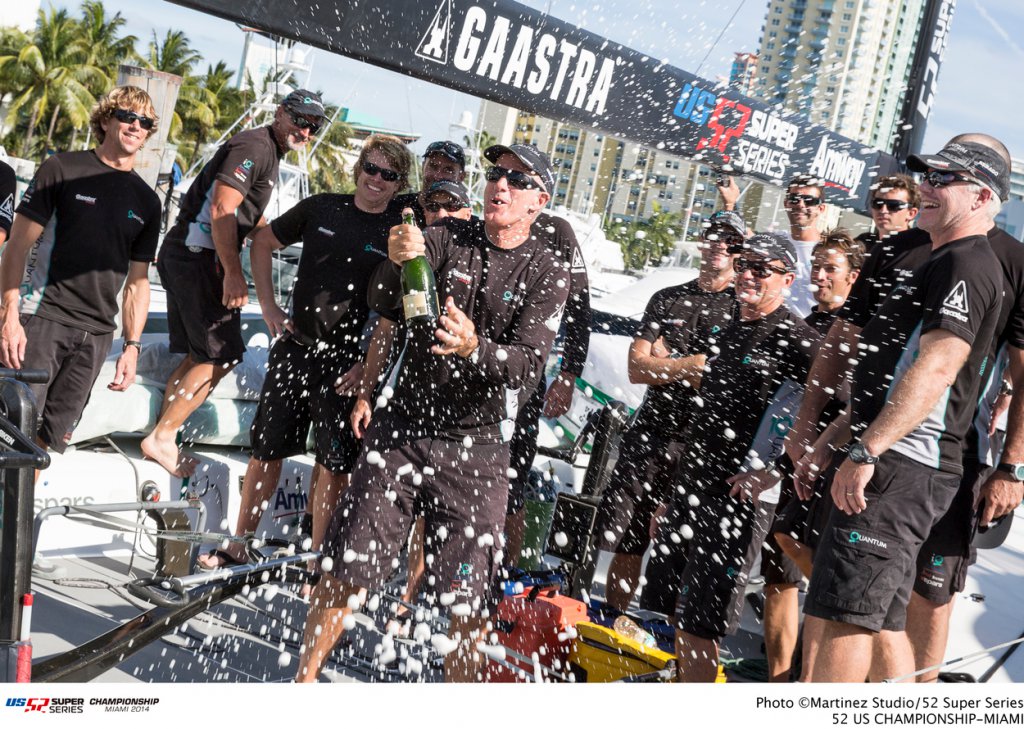 While Takashi Okura’s crew from Sled celebrated their own two bullets ending to their perfect day off South Beach Miami, Quantum Racing – with Ed Baird steering and Terry Hutchinson calling tactics – twice got the better of their duels with Azzurra. The quiet satisfaction of the victorious American team at a job well done, securing the US title today with a fourth and third in difficult, very shifty conditions contrasted sharply with the deep frustrations of the Azzurra crew. 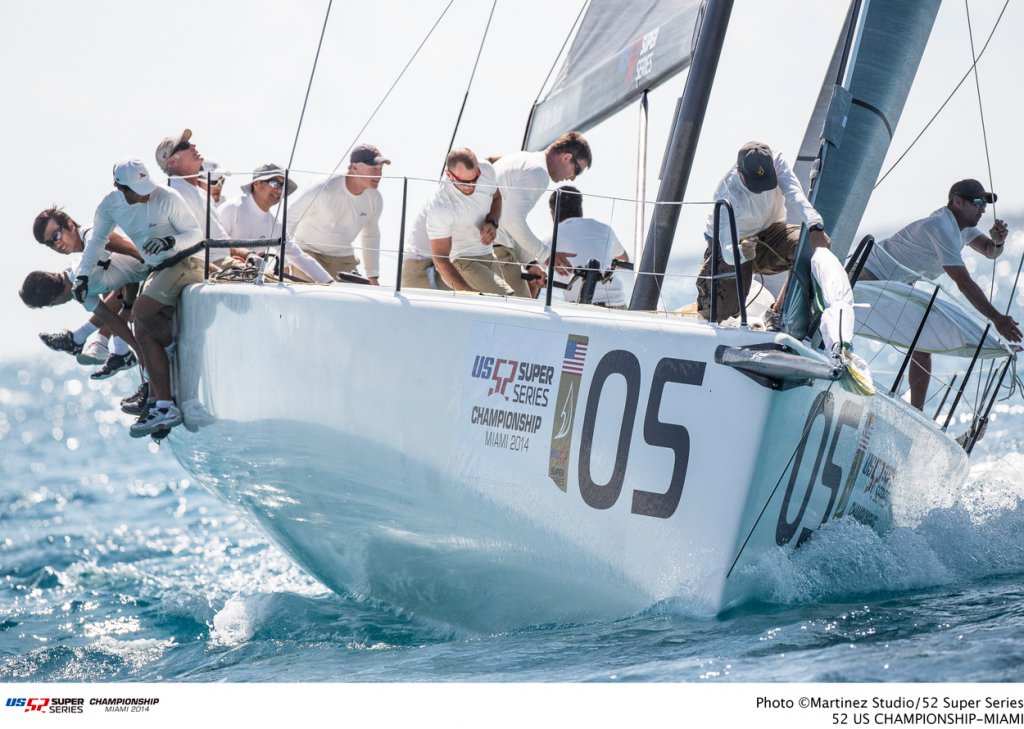 Twice they had started better and were ahead of Quantum Racing but both times their choices and tactics proved inferior. When Azzurra needed to put points on their rivals in fact they ended up dropping well behind, scoring a sixth and seventh. Having lead the regatta at interim stages the emblematic team from the Yacht Club Costa Smeralda will analyse their learning before starting up in Europe in May Capri when the Barclays 52 SUPER SERIES begins.

Just as Quantum Racing had two reasons to celebrate, so also it was double delight for Okura’s Sled team. Not only did they win both races today but their 2,2,1,1 finale over the last four races, easily the strongest of the fleet, elevated them to third overall in the 52 US Championship, the nine race Miami regatta. They edged out the Interlodge team – which had Dean Barker steering – but only on countback 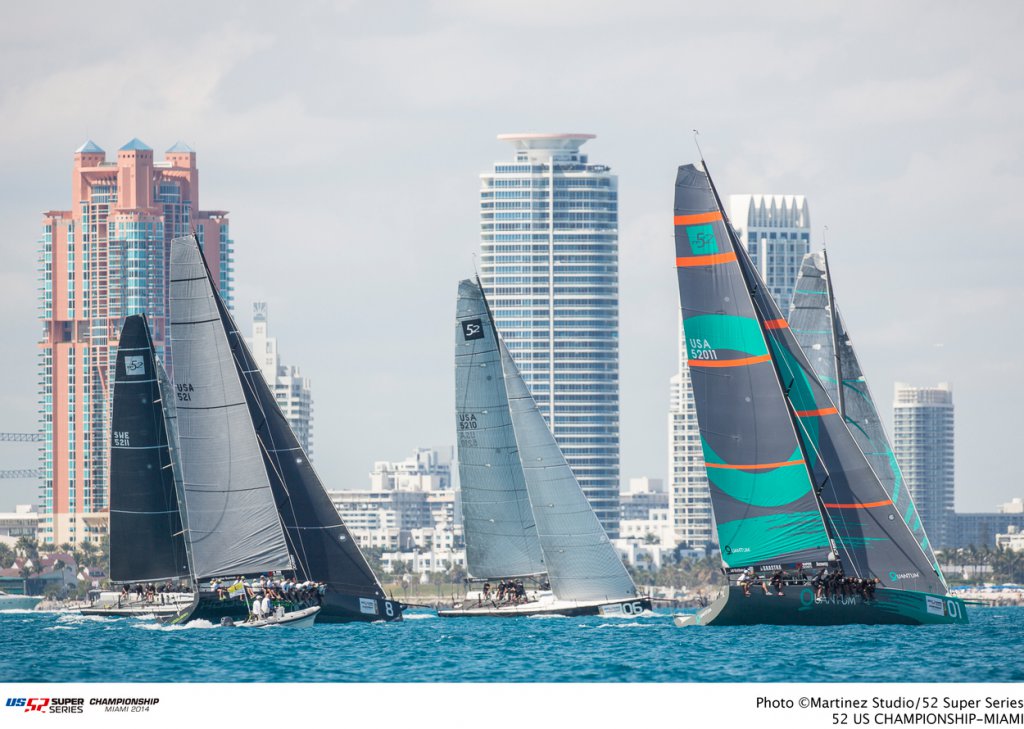 After the fleet was held ashore waiting for the breeze to build, the first contest was sailed in only 6 to 8 knots of very patchy, streaky breeze. With just two points separating Quantum Racing and Azzurra before the start, a match racing tussle seemed inevitable. After the requisite circling it was Azzurra which broke way to make the start they wanted towards the inshore end of the line. When they crossed it was Azzurra ahead but on the next pattern of shifts Quantum Racing jumped clear ahead of them.

Sled, with Ross MacDonald calling tactics, jumped off the start line and were able to cross the fleet to the preferred right, offshore side of the upwind leg and were never passed again before collecting their first race win of the US 52 SUPER SERIES. Azzurra faded badly and only by virtue of a last run penalty imposed on Hooligan did they avoid seventh. Quantum Racing finished two boats ahead in fourth, extending their cushion to four points into the final race.

The last race of the US season was marked by a big, big wind shift to the right. Sled were all over it, working the right flank almost alone and so, again, lead all the way around the short, but slow, and exacting final contest. Quantum Racing took third, only one second behind Interlodge as the pair dived for the line side by side.

The American team which is owned by Doug DeVos, current 52 SUPER SERIES champions, Quantum Racing finish the event as well deserved regatta and series champions, equally accomplished across the very fullest range of wind conditions which Miami has offered, from light drift-offs to a stunning mid regatta day of three very hard, physical races in 25kts, gusting to over 30kts. Tactician Terry Hutchinson acknowledged that they have been fast across all the conditions here:

I think we are fast here. That was the one thing for this regatta, I felt we were really, really fast. We never felt compromised at any time, speedwise. And that was a real bonus.

Miami at this time of year is always very hard, it is a subtle sea breeze with a lot of fanning pressure under the clouds and how that affects the race course. It is really, really difficult. And I would not pick that as our strong point. And yet we seemed to sail the boat pretty nicely.

As the North American series concludes owners and crews contemplate the Barclays 52 SUPER SERIES, the four regattas circuit in Europe which starts late May in Capri, Italy.

US 52 SUPER SERIES – TP52 US CHAMPIONSHIP 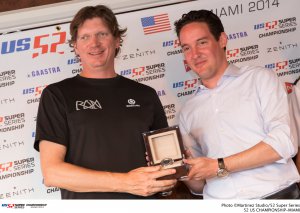 I am a bit relieved. We knew this was going to be a high stress day. The Azzurra team are a solid, solid team and there are not better that we race against. We had a pretty solid plan both races of what we wanted to do. The guys did good work negating any advantage that Azzurra had in the circling in the first race start and oddly enough we sent them out to the right hand side and in our first cross we took their transom. And at that point we sailed a pretty loose race and tried not to focus on them too much. You look behind you and you are looking at the past and where we have been. So we really looked forwards, trying not to focus on them. Obviously you are nervous and on a day when the wind is ranging 15 to 25 degrees and in the last race we had a massive windshift to the right. Second race we did not get the start that we wanted but we got the side that we wanted. We nipped and tucked it up that beat and if you had told me we would round second there would have been a big sigh of relief.
Miami at this time of year is always very hard, it is a subtle sea breeze with a lot of fanning pressure under the clouds and how that affects the race course. It is really, really difficult. And I would not pick that as our strong point. And yet we seemed to sail the boat pretty nicely. I said to the guys on the way in now that I have completed a full season with this team, what stands out for me is how good our speed team our, Warwick (Fleury), Brett Jones, Lorenzo Maas, and Juan Vila are as a speed nucleus, and then the next thing is a very solid boat handling team. We don’t really make that a lot of mistakes in that area and so that rounds out to the tactical perspective. We could not really ask for anything else.
I think that when we get to Capri we will need to sail better in the lighter air, generally. Not having Jordi Calafat will leave a big void strategically. And so Tom (Burnham) as a strategist up the rig, this is the first time we have sailed in those roles. And so we are developing that. And it will take some time. We can always make our sails better and our gear better. We have been having some great meetings here on how we can improve our inventory for Capri. We can really work hard on the boatspeed thing because that is great for tactics. But I think we are fast here. That was the one thing for this regatta that I felt we were really, really fast. We never felt compromised at any time, speedwise. And that was a real bonus.
Terry Hutchison (USA) tactician Quantum Racing (USA)

It is ironic because we did get the things that we wanted, we got them but unfortunately they were just the wrong things. It was wrong. That is the sad part of the day. We never really saw the things that Miami gave to us. Also the other boats in the standings did not have great starts or did anything really special. And that is sad to finish like that.
We need to believe in ourselves. We are confident that we can choose better that we did today. Otherwise I should change to different work.
Vasco Vascotto (ITA) tactician Azzurra (ITA)

We had a very good day, peaking later in the event is better than never peaking at all. The right shifts today were the key to our success, and we just had the right positioning to get there in time to take advantage of them in both races. We’re also fast off the wind in these light conditions, so that really help on the runs.
Ross MacDonald (CAN) tactician Sled (USA)

This was my second-ever event in a TP 52, so I feel a little like being in second semester kindergarten. But its been fantastic sailing, and the two most enduring moments for me were when we deployed the Hooligan swim team on Friday, and won a close race on the finish line with Sled yesterday.
Gunther Buerman (USA), owner/helmsman Hooligan (USA)

It’s certainly disappointing to miss being on the podium on a tie-break, but what kept us off was not our performance today, but earlier in the week. Regardless, the boat and the team were going great, and swapping out the wheels for a tiller in the last two days really made a difference in our positioning in the pre-starts, since getting off the line strong really helps, like in the last race today.
Andy Horton (USA) tactician Interlodge (USA)

Share this article:
News Overview SLED wins the battles, while Quantum Racing wins the war Final Day of the 52 US CHAMPIONSHIP | Miami
Quantum Racing US 52 Championship