(Thursday 9th March, Miami) – Quantum Racing won the only raced sailed today at the 52 SUPER SERIES Miami Royal Cup, but with regatta leaders Azzurra crossing the line in second place, the team from the Yacht Club Costa Smeralda lead by 11 at the half way point of the event with eight points. Provezza are tied on 19 points with Quantum Racing.

The 52 SUPER SERIES champions who won four out of five regattas last season, Quantum Racing, today came right back after a poor Wednesday when they added 13 points to their aggregate. With TP52 newcomer Bora Gulari steering, and Terry Hutchinson on tactics they made their small speed advantage in light airs work for them on the first beat and stretched out a good early lead, winning comfortably.

“In Key West, and now in Miami, we had bad Wednesdays. We are asking that we no longer race on Wednesdays.” Quipped the Quantum Racing project director Ed Reynolds.

“But seriously once again I am proud of how our team came back. I think in flat water like that today and light airs we always seem to have good speed and that was what made the difference. It was never going to be easy bringing in someone new into a fleet of this calibre. And the subtleties of communication in the starting period, the little nuances, are maybe where that tells. We always knew we would stub our toes a few times like we did Wednesday. And for missing out on training days before the regatta because of the weather did not help us.”

Quantum Racing’s Terry Hutchinson – the racecourse Houdini among South Beach’s world of Lamborghini, Martini and Bikini – did excellent work in sniffing out the best lanes of pressure on the first beat, seeming happy to take a couple of extra tacks to eke out the strongest shift and wind strength. 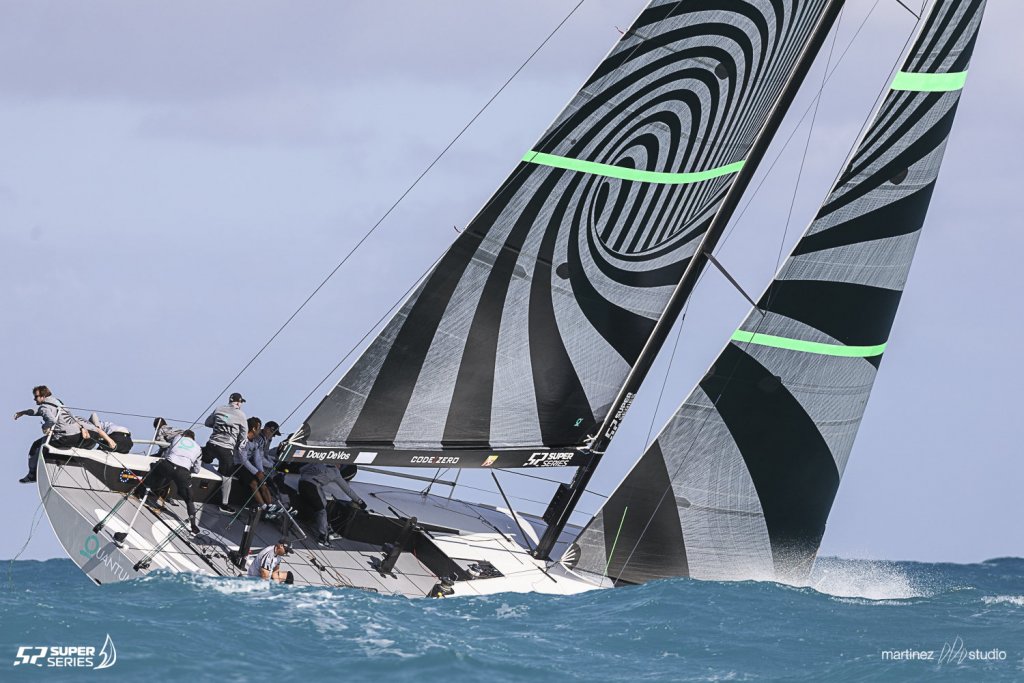 Their lead at the top mark was already telling, while behind them the scene – as the overlapped line up approached on the starboard tack lay line in a very gentle breeze – became ugly.

Azzurra, Sled and Provezza called it best, stayed clear, or took early note of the potential for pile ups, and rounded the top mark in second, third and fourth.

“Racing these boats in those conditions is very, very difficult. We’re going through a learning curve to help make the whole team better, so it all comes with understanding. There’s a lot of things we could’ve done better yesterday. Last night we got back, had our standard debrief, coach gave us everything he thought we did well and did poorly and came out today and tried to have business as usual.” 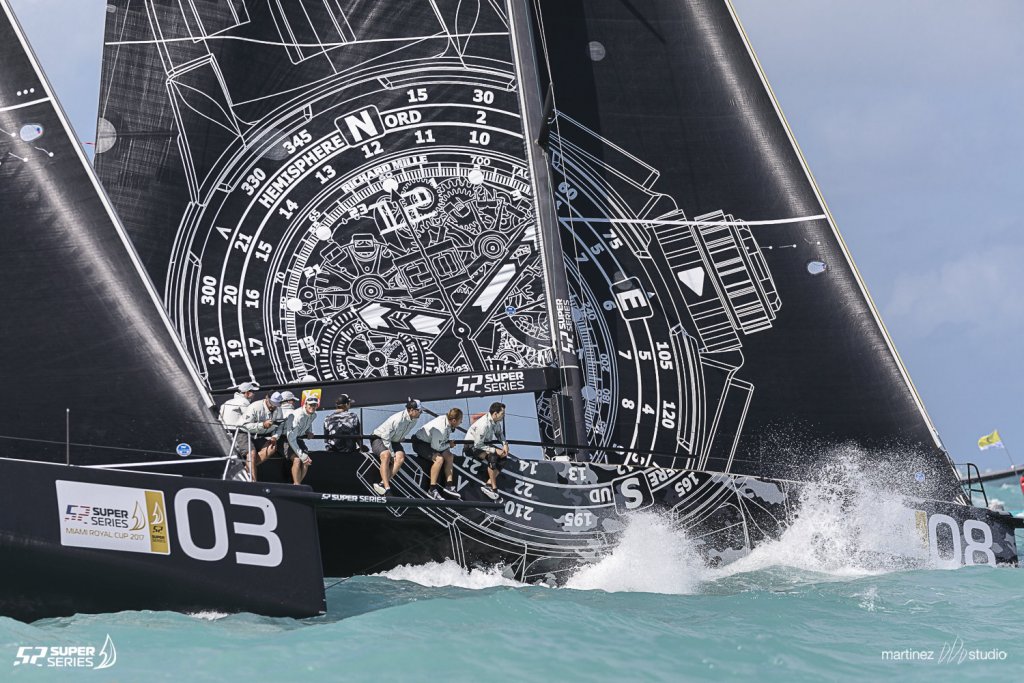 “It was very positive. We’re kind of relieved that we could stick with the pack. It was a little bit more straightforward for us today with flatter water and it became a bit more cerebral rather than wrestling the boat around the racecourse through the conditions. We found it a bit tough in the choppier conditions that everyone else has been used to sailing in. We’re very happy with our speed. We held our cool as the excitement levels got up toward the finish of the race and defended quite nicely against Gladiator.”

Tony Langley’s Gladiator crew took a well earned sixth, 48 hours of incredible work to mobilise their substitute TP52 from West Palm Beach, may have seen some red eyes matching the colour of their hull, but all credit to a remarkable piece of team work to get their other boat in the match after their new boat was holed in the second race of the regatta. 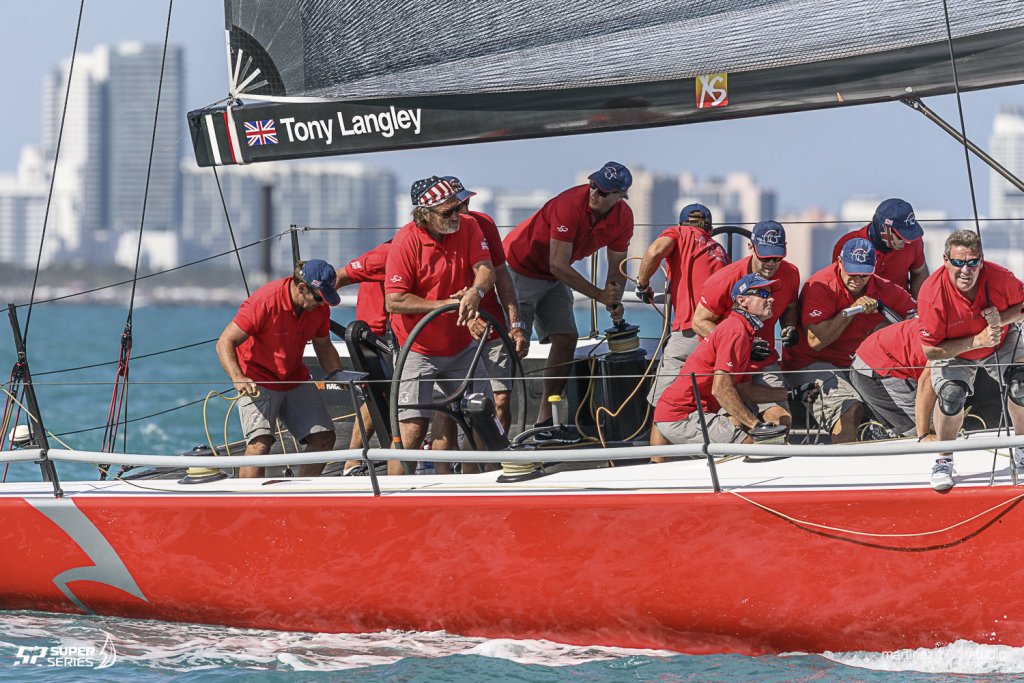 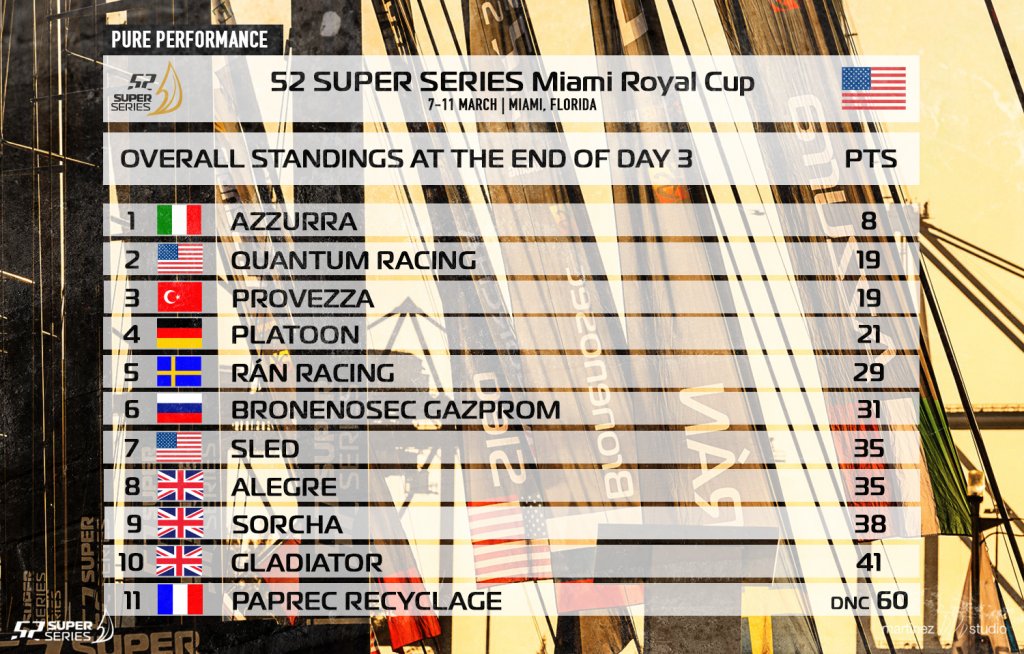 “Yesterday was a bunch of things. Racing these boats in those conditions is very, very difficult. We’re going through a learning curve to help make the whole team better, so it all comes with understanding There’s a lot of things we could’ve done better yesterday. Last night we got back, had our standard debrief, coach gave us everything he thought we did well and did poorly and came out today and tried to have business as usual.

We wanted to go left from the windward position. We didn’t execute a great start, but we were going better today. I think in the flat water, it’s easier for Bora to lock in and keep the boat going and that’s a condition that historically we’ve been quite slippery in. It was good it came our way a little bit, but we still had to fight for it at the end of the beat. A couple good placements and tacks and got around clear and had a good run.

Once we were leading we just put ourselves between the man and the hoop, no more complicated than that. At that point we were winning the race so we just wanted to make sure what happened to the group would happen to us as well. So we didn’t sail a great right number right at the end of the first beat to put ourselves in front of them, but it was good enough.”

“I think that we had a very nice race, the best race we sailed this week. I’m very, very happy about how we managed to sail the boat. We did a better job compared to the previous day. The reality is that in light air, still we need to improve a little the speed upwind. Downwind I think that we were fast enough to play games against the others. Upwind we still need to improve. We made a step forward, so we are very happy, but we still need to improve a little bit our speed in order to be competitive in light air against Quantum, that still is a little step ahead us.

That was a tough beat. We did a very nice start. I think Quantum did a little worse on top of us to windward. They tacked up the beat to the right. I think they used their speed [to get past us]. We are speaking about little differences. We need to play this kind of game in the future, work on our speed compared to him.

Campbell Field (NZL), Navigator, Sorcha (GBR): “It was a bit of a split left and right on both of the beats. One side was stronger than the other at times. We kept our cool. Everybody else got themselves all tangled up a bit at the top of the first beat, which gave us an opportunity to slot ourselves into the middle of the fleet. We just hung in there.”

Q. A few works about Nic Asher and Joe Glanfield?

“Nic and Joe, they sort of put their heads together and have a little whisper around themselves. They are very level headed, which was nice. The communication with them and the rest of the crew is improving every day that we go sailing. It’s great to sail with them. They probably look at the course a little bit differently. I think Joe’s still getting used to sailing on a boat longer than 4.7 meters. But it was good fun.”

“We actually wanted the right. One of the things we work on hard is to make sure we’re happy with the strategy, even in the pre-start. We changed the plan once yesterday in the middle of the pre-start and it worked and we did it again today. I was pretty happy to be to the right for the early pressure. In the end we all arrived to the mark at around the same time, which is what happens when it’s shifty out there.

After that it was just a really fickle breeze because we were expecting as far right as 130 and as far left as 90, which is a massive swing. But it was really more about the pressure than anything else.

Q. What happened at the first windward mark?

The breeze went the most left we’ve seen and got just a little bit lighter so the boats start sailing wider angles and we think there was a bit more adverse current, northwest flowing current, at the top than there was at the bottom and we all got a bit caught out. One boat tacks just on layline and everybody else ends up under them. We benefitted greatly from that too, we probably jumped from fifth up to third at the mark just by tacking back off the layline at the right time.

Q. What about on the downwind legs?

“We’ve all sort of realised that for some reason there’s more pressure on the left hand edge looking upwind. There seems to be pressure that lives there, which is funny because it doesn’t seem to play out upwind but downwind there seems to be pressure on the layline so that’s why you’re seeing a lot of boats jamming up that bottom layline on port jibe. It’s unclear why, it could have something to do with the current coming into Bear Cut [between Virginia Key and Key Biscayne] there, but it certainly not a simple race track.”