Three wins back-to-back takes 52 SUPER SERIES champions Quantum Racing to the top of the TP52 Class at Gaastra Palma Vela which four 52’s, three of them freshly launched new builds, are using as a key tuning and training regatta before the 52 SUPER SERIES starts on 18th May in Valencia.

With Dalton DeVos on the helm of Quantum Racing, pace off the start line and winning the pin end position was vital once again today and the champions were on strong form, even if there is visible areas for improvments before Valencia, as there clearly is through the fleet.

In both races Quantum Races lead up the first beat and were able to hold on all the way around the windward-leeward tracks. They had a small speed edge off the line in the 5-7kts of the first race.

After experimenting with different rig settings for the second race at times they looked more vulnerable to second placed Azzurra. But with so much tuning, testing, changing and crew training going on, agendas differ from race to race.

Clearly Quantum Racing are on track and in a strong position. Young Dalton DeVos is learning from the best the small detail points of manoeuvring the 52. So much is down to winning the start on the Bay of Palma and to date Azzurra have never really pushed for the prime spot. Interlodge have visible sweet spots and an acknowlegded weakness downwind in the light-moderate airs and Andy Soriano’s new Alegre may have a settled, experienced team on board but their learning curve is that bit steeper as newcomers to the boat and the class. 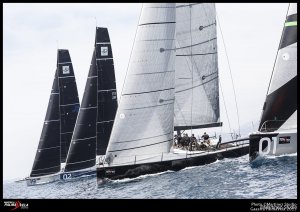 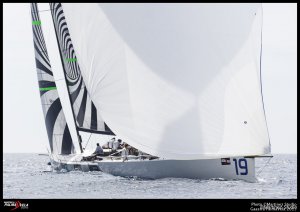 The first race was contested in a lighter, but more consistent breeze than the second. In 5-7kts the order for the first race was very much set off the start line. Quantum Racing were two or three seconds late on the buoy but had the speed to pop out in front of Azzurra which had to tack away early. Interlodge were second all the way round to stay in contention whilst Alegre had the best timed start but lacked the smallest click in speed over the first minutes to be able to impose themselves from the windward berth. Quantum Racing won by 58 seconds over Interlodge with Azzurra third and Alegre fourth.

The second race saw the S’ly breeze up to double figures at times but was more shifty and streaky, dropping away to five to six knots momentarily. Azzurra, in second, pushed Quantum Racing hard at times but could not get close enough to force any errors from the well drilled champions.

Today was about more of the same learning we have been looking at the last couple of days, how we want the rig set up and what we want to do with our sail plan, where we are strong and where we are weak, where we are going to have to make some improvements. We seem strong most of the time. We would like to see how we do up range (in stronger breeze). There is a lot of work to do on that but in the moderate, moderate/light stuff, we seem to have a good mode and the things that we had seen before are trending that way pretty quickly.

It is so early. Everyone is just trying so hard to figure out where we all are. These boats are really different to what we used to sail. The modes, the way you sail them upwind and downwind are different. We have a really good crew and I think that their guesses are maybe half a click ahead of the other guys, but they will catch up pretty quick.

Three wins, an important psychological advantage over the other teams at this stage?  Our guys have worked so hard and we had gotten behind. The most important benefot for us right now is the energy of the team. As hard as everyone has worked to now and to be struggling for a period of time – they would have overcome it because they are professionals – but this makes it easier to keep the energy up.
Ed Reynolds, project director Quantum Racing (USA)

Quantum had the best of the day. They had good starts and sailed pretty faultless races. We did not get off the line as well as we could have. You have to win the pin end and they had nice starts. We held our lane well in the first race and got a second.
We have to improve our downwind performance. We lose a lot on the runs. We have to keep working on our sail programme. You look at the fleet and there is some technique to improve there, and if we can improve there, to be competitive downwind, then I think it’ll be nice.
Dean Barker (NZL) Interlodge

Progress is good. I am loving the boat, the fleet is tough but we are novices in this. We have to get more practice. It was good today, it is a left hand course you have to win the pin and go left. But we held our own and did not get spat out the back too badly. If you tack more than other people you are not going to end up winning. It is what I expected at this stage. It is all learning for us, it is all good.
Andy Soriano (GBR), owner-driver Alegre

We are very happy. It is not a regatta we have to win. It is the first event with the new boat, we are testing so many different things all the time. We think that we are quite happy. We felt that in the past Quantum had an edge now we feel that we have closed that gap a little bit. Palma is a one way track and if you have a nice start on the left then you can win. We are not pushing for the pin right now because it is not the time to do that. It is more about learning. We have some new guys on the crew and we are learning with them, new stuff and looking at sails a lot.
Vasco Vascotto (ITA) tactician, Azzurra (ITA)