Quantum Racing on the threshold of 2014’s first title

While Quantum Racing composed a strong penultimate day of the five day series, posting a 1,2,1 from the three races sailed in fantastic conditions, their main title rivals Rán Racing and Azzurra had some difficult moments, not least when they both were over the start line early in the last contest. 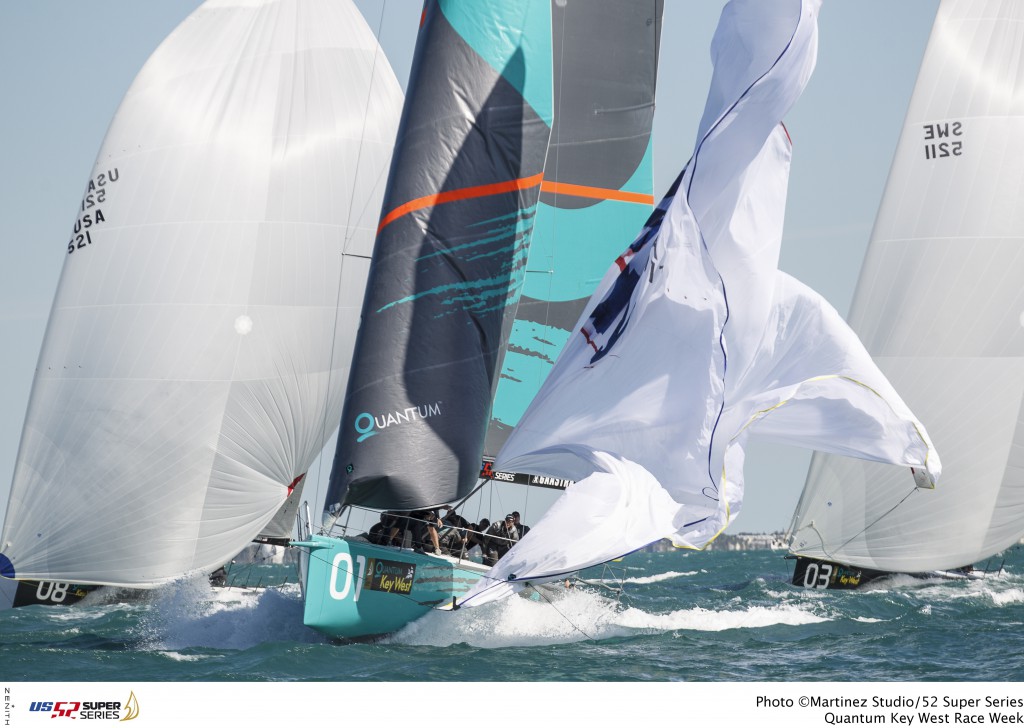 Quantum Racing streaked away to a big early lead whilst their challengers lost a lot of time re-starting. And an incident at the first mark of the second race, when they were first and second certainly unsettled the Italian flagged team who gybed away to the left, into very light winds which dropped them to a costly sixth place.

DeVos’ crew, with Terry Hutchinson calling tactics partnered by Ed Baird as strategist, by contrast navigated a smooth, accomplished trio of races, bouncing right back after a high scoring Wednesday. With only one race scheduled Friday Quantum Racing have a lead of four points ahead of the world champions Rán Racing.

Azzurra’s errors leave them vulnerable to the continued advances of Interlodge who continue to impress with their steady, low scoring consistency. Austin Fragomen’s team which were runners-up here last year are just one point from the podium. 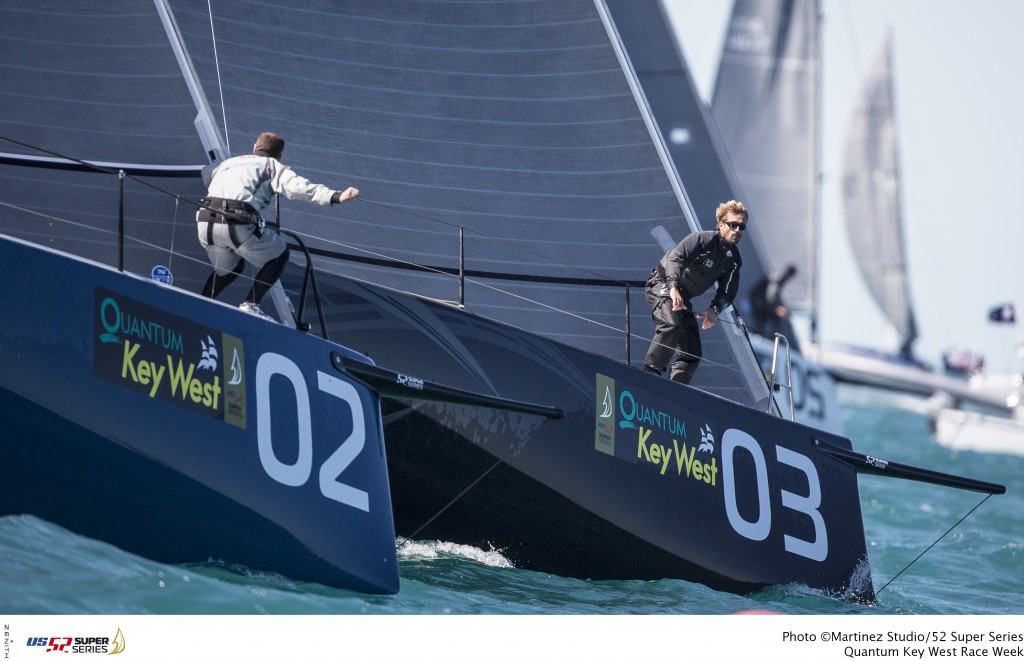 In 15-17kts on NNE’ly breeze Quantum Racing benefited from the left shift on the first beat to lead the first race, but Azzurra lead through the leeward gate and appeared to have a controlling position on the American green and black boat on the final leg, but with slightly better speed and a small right shift DeVos crew were able to gently roll over Azzurra to score their fourth win of the regatta.

Interlodge came through on the final stages of the last run to take second in a very close finish which saw four boats overlapped on the line, the close racing enhanced by the short, sharp course which lasted just 44 minutes.

Niklas Zennström’s start to the next race was pin sharp and that was what allowed Rán Racing to only just squeeze around the top mark ahead of Azzurra. The Italian crew launched a protest claiming the Swedish boat had tacked too close and they had been forced into avoiding action. And as they were slowed and rolled by Quantum Racing they gybed way out to the left of the downwind which sailed them into very much lighter breeze, Azzurra rounding the leeward gate a distant and disastrous sixth. 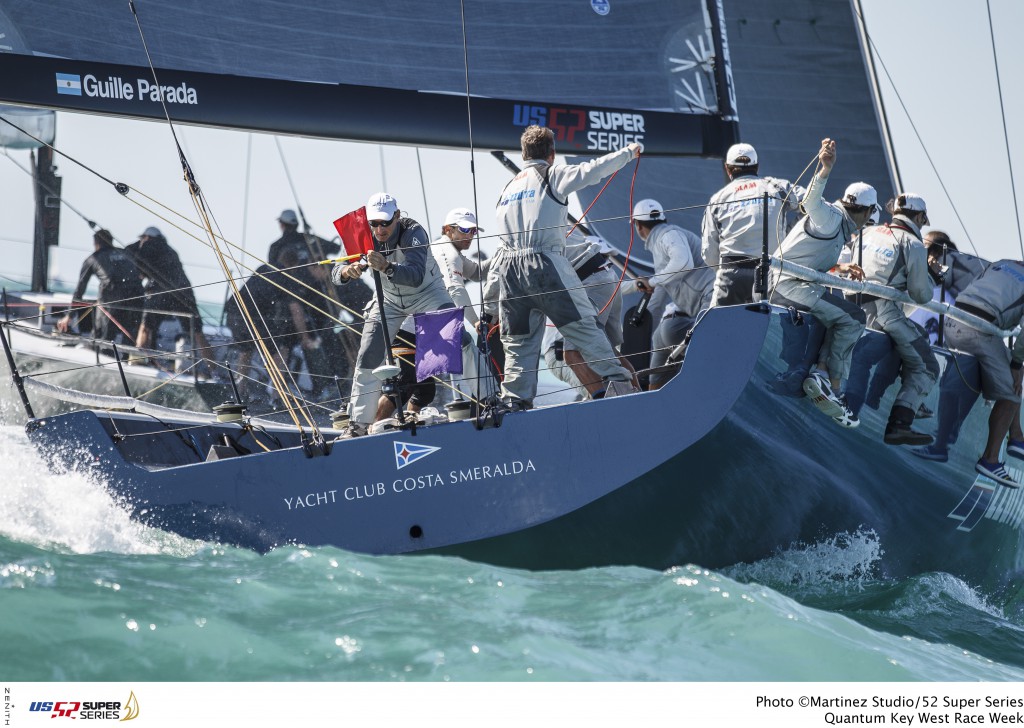 The third race was the most dramatic, even if the wind had eased back to 10-12kts. The three top protagonists were side by side on the line which was biased to the committee boat end. All pushing each other, Quantum Racing was slightly to leeward and ducked in the final two or three seconds, whilst the other two were immediately and clearly signalled over. Both returned, Rán Racing needing a second attempt to exonerate themselves. Finishing fourth and fifth whilst Quantum Racing and Sled took first and second, the 52 SUPER SERIES champions are in a strong position, but as ever their focus is as much on the season long title, and the two regattas US 52 SUPER SERIES title, more than winning constituent regatta titles:

DeVos concluded with a smile:

We are just looking at the whole season and we are just out to keep banging in good results and so that will just be the plan tomorrow.

What a day…..what a day. It was a pretty bad day for us. We did not sail well at all today. Unfortunately we did not choose the right sides. We had a forecast for something different. And we push a little to the right all day.

Yesterday we felt like we actually sailed pretty well but had one really catastrophic moment when we were in second place when we hooked a lobster pot and that pushed us back into last. Today it went really smoothly and actually Doug is doing a great job driving the boat nicely around the whole race track. At the final start we were not really looking at Azzurra and Rán Racing as rivals but as two boats we wanted to beat off the starting line and we had a pretty strong position on them on the starting line but we were very close to the start line but in fact we had to hold our bow down just a little long to start, they turned up before us, I was worried we might be over, we turned up two seconds later and they were over. I think they both turned up together because they were keen to just jump us together. They did not want to be thin, on our hip just off the line, by turning early sometimes you can just get that jump on the guys to leeward.
We are just looking at the whole season and we are just out to keep banging in good results and so that will just be the plan tomorrow.
Ed Baird, USA, strategist, Quantum Racing, USA

Of the three races we had one good one which is not good enough. It is all about being consistent, and unfortunately we were not. We were over the line in the last race which is hard to recover from. We were close to the committee boat and Azzurra were in front of us and covered the transit for our bowman, we were told we were fine but we were not. But you know what, in this fleet there is just no margin on the start line. You need to be one second the right side of the start line in every race. If you are not you are behind. That is the level of competition here. Sometimes you are going to be over. Sometimes you really nail it but sometimes you don’t. But we have been starting well this week, we have improved a lot.
It is shaping up to be an exciting last day, unfortunately only one race, but the only thing we can do is go out there, relax and sail as well as we can.
Niklas Zennström, SWE, owner-driver Rán Racing, SWE

We are looking to just improve, to make our weaknesses. We had a nice lead on the first beat of the last race but the job just ripped, maybe caught on the spreaders or something. That put us back pretty far but we dug in pretty well and we had the best crew work we have had, the best boat handling, we got a couple of shifts and then pushed right through and were almost second. We have a great group of people who just really want to work together, to learn a lot every day and we can talk candidly to each other. This group has a really good dynamic, talking about what is going to happen next, where we go next. I think the podium is within reach which is great.
Andy Horton, USA, tactician Interlodge, USA

What a day. What a day. It was a pretty bad day for us. We did not sail well at all today. Unfortunately we did not choose the right sides. We had a forecast for something different. And we push a little to the right all day. And we had an incident with Rán Racing in the second race when we were almost leading at the top mark and that gave us a problem, but that gave us a problem because Quantum Racing rolled us and we had to gybe and we ended up with no wind at all. It was frustrating but this is sailing. We had a bad day, and so tomorrow we will be back and try to finish this regatta properly.
Vasco Vascotto, ITA, tactician Azzurra ITA