(Friday 20th September, Porto Cervo) – The closest finish to a title race in the history of the 52 SUPER SERIES will come to a head on the scenic waters of Sardinia’s Costa Smeralda next week at the Audi 52 SUPER SERIES Sailing Week Porto Cervo.

The host club favourites on the emblematic Azzurra seek to secure the 2019 season championship, in so doing looking to hold off what promises to be a very strong challenge from the Harm Müller-Spreer’s recently crowned world champions aboard the German-flagged Platoon.

While Azzurra are three-times circuit champions, winners in 2012, 2015 and 2017, Platoon are twice runners up and are well placed to finally break the duopoly that has so far prevailed since the circuit’s inception. To date, Quantum Racing and Azzurra remain the only two teams to have lifted the 52 SUPER SERIES titles since the circuit was launched in 2012.

While Platoon arrive on the Costa Smeralda as winners of two of this season’s events, the curtain raiser in Mahón, Menorca in May and last month’s Rolex TP52 World Championship, Azzurra may not have registered a regatta win on the circuit this season, but they have missed out three times – twice by one point and once by two points. Azzurra’s Argentinian skipper-helm Guillermo Parada notes enigmatically:

“Listen, here at this last regatta I would happily finish second again by two points, or even one, because that would mean we would still win the season title and that is what the year is all about. I feel like we have sailed well this season and have maybe not had the luck we could have on each of the final days.” He smiles, “ The last day of the season is my 52nd birthday – 52 like ‘TP52’ – it has to be a good sign; and so I want to be celebrating for the right reasons.”

“But all that notwithstanding, it is great for us to be finishing the season like this on our home waters. Everything is good with the team and the boat, and we have some new sails coming and we have some electronics and equipment updates, which we can’t talk about… but which we think will help our performance.”

Asked about the rising pressure of the showdown on home waters he responds:

“We we will take it just like every other event, focus on doing our jobs at our very best, and try and not to make little mistakes. We will stick to the routines we have, ping the start line, choose a side and go from there.”

“Generally we are sailing well,” he confirms, revealing that tactician Santiago Lange will prioritise the defence of his 2016 Olympic gold medal next season and so is unlikely to sail with Azzurra. Parada notes: “It took some time for Santi to understand ‘the game’ but now we are making good decisions. Next year he will be at the Olympics and so we have to start again. Meanwhile, we want to win an event with him. He has the experience, remember he was second here with Phoenix at the 2014 TP52 Worlds.”

Platoon missed the overall title in 2017 when they finished seven points behind Azzurra, and last year they were 37 points adrift of Quantum Racing’s conclusive championship victory. Owner-driver Müller-Spreer believes the momentum is with his team:

“We will fight all the way to the end, that is our way. This is a wide open race to the title. We are not interested in dwelling on the past. We come to Sardinia as new world champions and that brings us confidence; in ourselves and in the boat. But we are only interested in looking forward and avoiding the mistakes.” The three times Dragon world champion helmsman admits: “But we are up for the fight and will battle to the end.”

“On Platoon we arrive in Porto Cervo with such a great opportunity to win the circuit. It is very close and it would be so good for an owner-driver like Harm to win. At times last year we led Quantum Racing and Azzurra, so this is our chance again. All of the races will be so tight as the level is so high. This will be so tough and difficult from the first race to the last but it will be a spectacular. In Porto Cervo at this time of year we can have a whole range of weather states, and we should get a little bit of everything, some light breeze and also the Mistral.”

Defending champions Quantum Racing are poised in third place on the season standings as the 10-boat fleet sets up in Porto Cervo. They are only 11 points off Azzurra’s lead and five points behind Platoon and still have a fighting chance of retaining the championship title they won last year. Owner-driver Doug DeVos is due to steer Quantum Racing. Vladimir Liubomirov’s new Bronenosec are fourth in the rankings, six points behind Quantum Racing.

The Official Practice Race is on Monday. Points racing begins Tuesday and the one Coastal Race of the 2019 season should take place on Wednesday. Live action streaming from the race course with 52 SUPER SERIES TV runs Thursday, Friday, Saturday with broadcasts starting at 12:15 CEST each day. 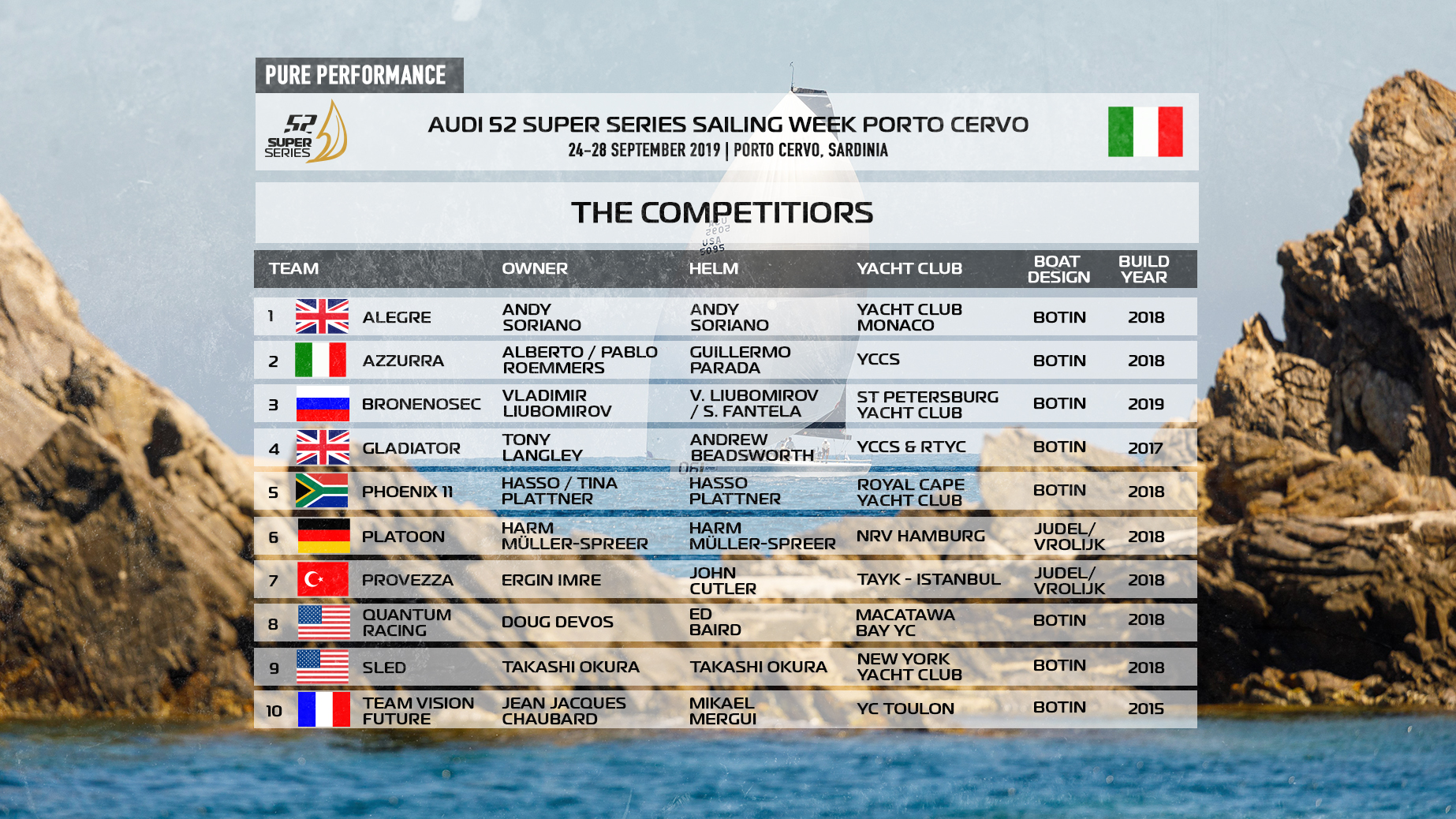