The Copa del Rey MAPFRE may be the third regatta of the BARCLAYS 52 SUPER SERIES but with only 11 races sailed so far over the Capri and Porto Cervo events and up to 11 races programmed for this annual showcase Mediterranean event, the six days of racing on the Bay of Palma might prove pivotal in terms of the 2014 series title.

And while Quantum Racing may be perceived to be a dominant force after winning the US SUPER SERIES and the Audi TP52 World Championship title under skipper Ed Baird, in reality when racing starts tomorrow Monday Quantum Racing are actually only four points ahead of Niklas Zennström’s Rán Racing and five points ahead of the Roemmers family’s Azzurra skippered by Guile Parada.

The BARCLAYS 52 SUPER SERIES standings are tight and there is a lot of racing to be completed here in what usually are very reliable sea breeze conditions.

The Copa del Rey MAPFRE programme calls for one coastal race for the TP52s on Wednesday, splitting up a diet of windward-leewards before racing concludes Saturday. In the place of the intensity of Capri and Porto Cervo’s four racing days, Copa del Rey is more about grinding out a result, sustaining the very highest level of performance, keeping it mistake-free over six long days in the strong summer sunshine and heat. And ashore, there is of course the buzz of being at the biggest regatta of the season as well as the excitement of Spain’s new King Felipe VI racing for first time since his coronation. Like his father Juan Carlos he is an avid sailor and carries on the tradition at the King’s Cup. When he is on board he will steer Aifos.

It is interesting here. If someone takes this regatta on well then they will be right in the frame for the BARCLAYS 52 SUPER SERIES title.
Adrian Stead, tactician, Rán Racing

We, the Rán team, like sailing here. Last year we were runners up and the year before we won the Royal Cup. We like the place, we like the venue and we think we understand it reasonably well. We have come a very long way since Miami and are really pleased with how we sailed in Capri and in Sardinia. We have been developing things, we are going faster and are starting better. We really feel like we are sailing the 52 the best we ever have. We think we can give everyone here a good run.

The starts here are key. But we are sailing on two different course areas and so there are subtleties on each course area. We have a coastal race as well and that throws in something different. But the key at the Copa del Rey is to sail solidly for six days. You have to be able to keep things so very tight and save the points here and there. You have to not give an inch. You have to do your homework every morning, the routines that work and make sure you are absolutely ready for the conditions. We are sharing the race course with the Mini Maxis here and you have to be really switched on to that. The five Mini Maxis in front of us will be taking the lanes and there are also other traffic, and if it is a one way track you have to manage that aspect of it.
Adrian Stead, tactician, Rán Racing

Through the fleet there are some small crew changes. On Quantum Racing navigator Juan Vila will miss this regatta and Ibiza. Vila was signed for a possible Volvo commitment which was due to be operating now. Italian ace Michel Ivaldi was programmed to step in because of this and so the Quantum Racing team chose to honour their agreement with Ivaldi who has sailed for Gladiator for some years. Kiwi Ed Smyth joins Gladiator as navigator and meanwhile Morgan Trubovich sails as trimmer on Azzurra.

We are really looking forward to the injection of fresh eyes.
Terry Hutchinson, Quantum Racing

We will miss Juan and all that he brings but in the same breath new energy will be good.
Terry Hutchinson, Quantum Racing

This is a long regatta and so we have to be in a position to strike the averages. Last year Rán opened with three bullets and then we went on to take the next five. The subtlety of the Palma Bay breeze is tricky so the big emphasis is on consistency. And one race at a time is the only focus. Other than that it is business as usual.
Jordi Calafat, tactician, Quantum Racing 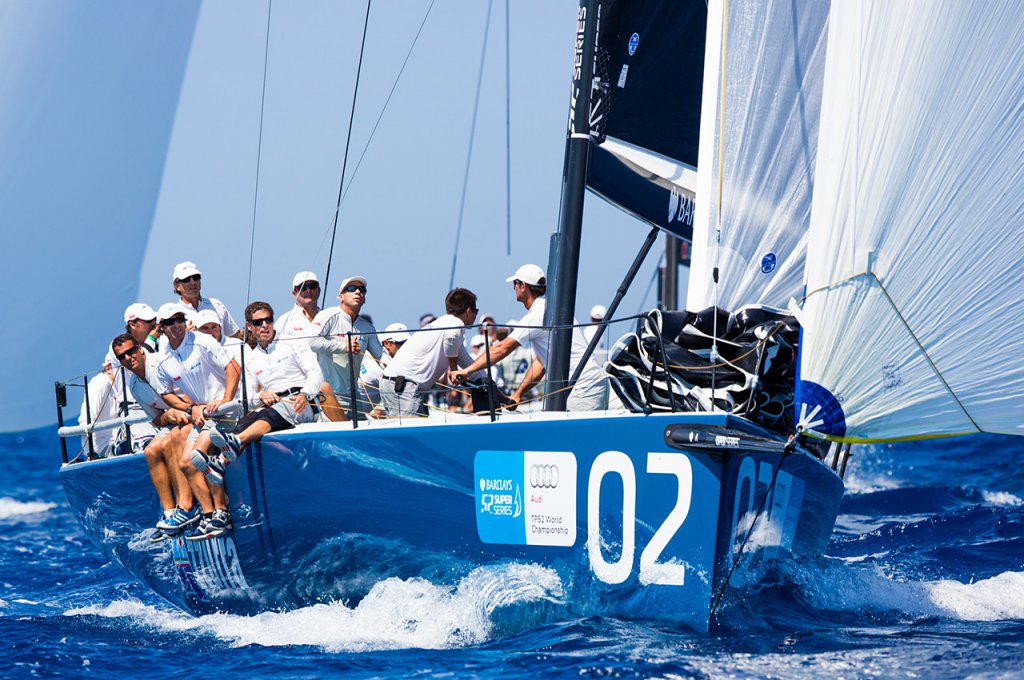 Azzurra, winners in Capri, know what it is like to win the Copa del Rey as a team and also know they need to bounce back after a disappointing regatta least month on their home waters:

This will be a big test for Azzurra. After winning in Capri, only to do badly the following month in the TP-52 World Championship, we know its time to return sailing at the level we are capable of. We need to start better, sail with a less risk tactically, and crew work needs improvement (particularly when taking the Gennaker down). We welcome Morgan Trubovich on board to trim and help with the crew work and speed. His experience will be a big asset to the team.
The reality is, with only two practice days and no practice race, we will have to improve as the regatta goes on, lifting our level a little bit each day. The whole team is looking forward to responding the challenge.
Rod Davis, coach, Azzurra

We are looking forwards to sailing with Morgan Trubovich. He has sailed at Copa del Rey with us in the past, so we know him very well.
Guillermo Parada, skipper, Azzurra

Racing is schedule to start at 1300hrs each day (local) with seven TP52s racing in the standalone BARCLAYS 52 SUPER SERIES class.