(Wednesday 28th August, Puerto Portals) – A testing, northwesterly offshore wind of 12-17kts produced fantastic racing conditions today at the Rolex TP52 World Championship on the Bay of Palma out of Puerto Portals as Harm Müller-Spreer’s Platoon took control of the title race. They posted two first places and a fifth to lead the championship by seven points going into the final day, Thursday.

But for all that the 2017 world champions stepped clear of the pack today, sailing smart and fast, they did start each of the three races on the back foot, forced each time to climb through the fleet. After seven races their average points score per race remains three points.

They have retained the level of consistency that would normally lead to a regatta win. Unfortunately Takashi Okura’s Sled did not manage to capitalise from their position at the top of the world championship standings. Two penalties sent them to fifth overall, now 19 points distant from Azzurra, which lies second.

The north westerly breeze was something of a pleasant surprise for most of the teams that had expected to race in a light, standard, Bay of Palma sea breeze. The offshore breeze was pleasingly steady in mean direction but phased left and right to present plenty of opportunities for place changes. Platoon’s Olympic gold medallist and America’s Cup winner Jordi Calafat relished the chance to sail in a northwesterly breeze that is rarely seen in summer on his home waters, the Bay of Palma, where he trained and raced during his formative years.

“These are Jordi’s home waters too, and it’s not very often like this [breeze direction] out there this time of year, so it was pretty good as Jordi does see a bit of this whereas others just come out here in the summer and only see the seabreeze,” but Halcrow observed; “Tomorrow is supposed to be another normal sea breeze day, 8-14 knots, so hopefully we’ll get out there and get two races off! It was good to mix it up for Palma to have a day like today. It’s been a little bit different all around here this summer all season, but it was good to have a shifty day. If we’d had those starts on a normal sea breeze day it would have been a lot more difficult to get back up there!”

And looking at the prospects of winning the season’s title, Halcrow refused to be drawn:

“We are just trying to take it one race at a time, minimise the mistakes and sail as well as we can every race.”

Azzurra are still very much in contention for the world title but need something to derail Platoon’s train of consistency. Azzurra’s Olympic champion Santi Lange reported:

“Today Platoon did really well to be patient to position themselves geometrically to get an advantage when the leading boats are going at each other, to protect their places. They are really smart in positioning themselves and they can catch up in critical situations, it was really good to watch. I suffer more with the offshore breeze, but I think we are better. You suffer more because you have the responsibility of the team, and some positions can be painful, but I enjoy more this racing than the typical sea breeze day. But tomorrow with the sea breeze. we have the potential to sail well, but my hat off to Platoon who are sailing so well at the moment.”

Vladimir Liubomirov’s Bronenosec sailed a 6 and 3 before winning the third race, which moved them to third on the regatta rankings.

“We probably got a little too conservative in our starting and tactics today, though we managed to get it right in the last race. Even if it was maybe our worst position 5 minutes into the race, we chipped our way through it.

It was a tough track because everyone had the feeling that the right was good. So if you weren’t leading you had to get a lane a little bit left and then it seemed like the left was actually working pretty well. So that compressed the fleet.

I think our boat is probably modded a little bit more up-range; everyone else set themselves up for Palma, 8-12 knots of wind, and we thought we were right, but we’re realistically better in the 10-14, so today we had some legs, which was nice when the breeze came up.” 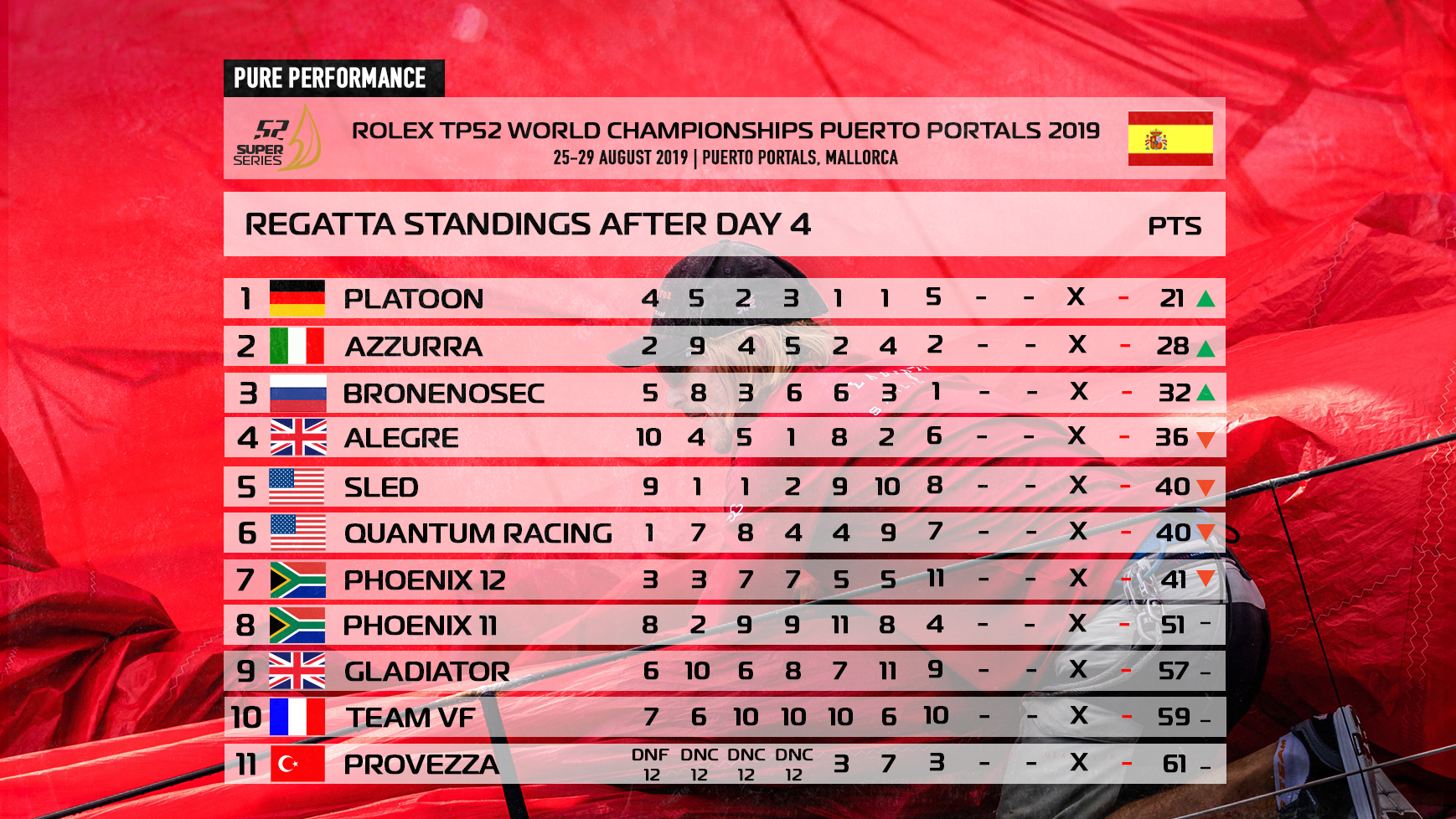