(Monday 19th June, Porto Cervo) – Crowned first time world champions after winning the third event of the 52 SUPER SERIES in Scarlino, Tuscany last month, Harm Müller-Spreer’s Platoon team are the form team of the six-regatta season so far. Second in Key West in January, runners up again in Miami in March and then world championship victors in June in the first of two Italian regattas, the team, which races under the German flag, must rank as narrow favourites among the 11-strong fleet, which will start the Porto Cervo 52 SUPER SERIES Audi Sailing Week on Wednesday.

After 27 races so far this season, 10 in Key West, nine in Miami and eight in Scarlino, Platoon lead on 103 points, four points ahead of Azzurra, who will be back on home turf, and 11 points up on the defending champions, Quantum Racing.

Even if Platoon are the only team to have been on the podium at each and every regatta so far, the crew are taking nothing for granted and are always looking to bolster their weaknesses. Mainsail trimmer Dirk de Ridder comments:

“We are happy with where we are, but I am nervous about our light-wind upwind speed in the Med. We need to keep working away at that.”

He refuses to consider the fact that they are leading the series at this stage:

“It is completely irrelevant at this stage; completely irrelevant, as far as I am concerned. This the 52 SUPER SERIES and these are the TP52s. It is just so close. If you look back we could say we should have had better regattas. You could as easily argue we should have had worse regattas. I am pretty sure all the teams out there think the same. What counts is where you are on the last day.”

Attempting to counteract what De Ridder considers to be a weakness, Platoon will bring on a new light-winds mainsail if conditions call for it. 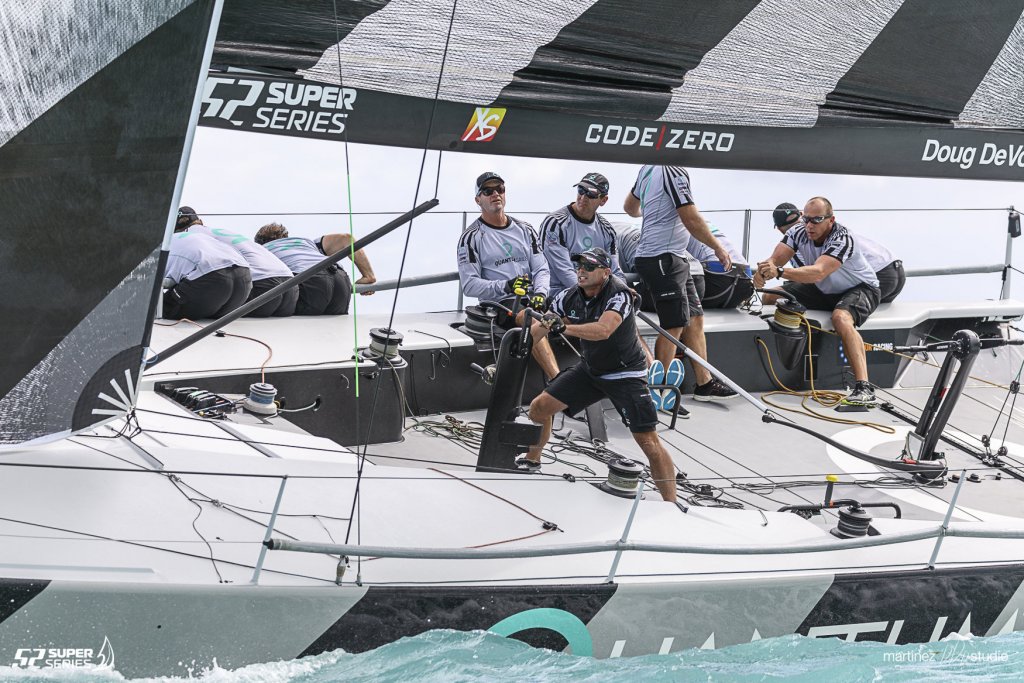 Doug DeVos is back at the helm, as seen here in Key West.

As planned the defending champions, Quantum Racing, will have owner-driver Doug DeVos return to the afterguard, and he will remain as helmsman at each of the remaining regattas, in Puerto Portals in July and Menorca in September. DeVos last steered Quantum Racing in Key West when the champions opened their season with a regatta victory. Bora Gulari drops into the strategist role, supporting tactician Terry Hutchinson. Regular crewmember Sean Clarkson returns from Bermuda to Quantum Racing from his seventh consecutive America’s Cup, working as sail trim coach to SoftBank Team Japan.

Project Director, Ed Reynolds, cherishes the energy that DeVos brings to his team as well as the stability and continuity of now being able to sail with a regatta winning line up for the remainder of the season:

“We want to win the season.” Reynolds asserts, “We want to win the title and we have three events to do it. We don’t need to go out and win it in the first races in Porto Cervo, but we will be chipping away all the time. And I will be very surprised, if, at a couple of days out from the end in Menorca we are not in there fighting for the title.”

“We are delighted to have Doug back to steer for the rest of the season. He brings so much positive energy and stability to the team. And he is a great sailor in his own right, having done this for so many years. Bear in mind he has been through all the circuits, the 50-footers, IMS and involved since the start of the 52s then he really has done this his whole sailing life.”

Of the success of their three-boat team programme, he confirms:

“As a group we have taken on a lot, but it is great to see it working. It is a lot of work for everyone, but to see Platoon win in Scarlino, Gladiator are going so well and improving, we can see we are doing the right thing. We could take on another couple of TP52 programmes, like an entry level team for example, and be sure that by sharing our IP as we do and providing the coaching support that they would make the best possible progress, getting up to speed quickly.”

Bronenosec, Vladimir Liubomirov’s Russian-flagged team, are seeking to effect a climb up the regatta and overall leaderboards after a very disappointing ninth place overall in Scarlino. They have recruited Italian Tomasso Chieffi who steps in to complement tactician Morgan Larson, while project manager Michele Ivaldi is no longer involved. 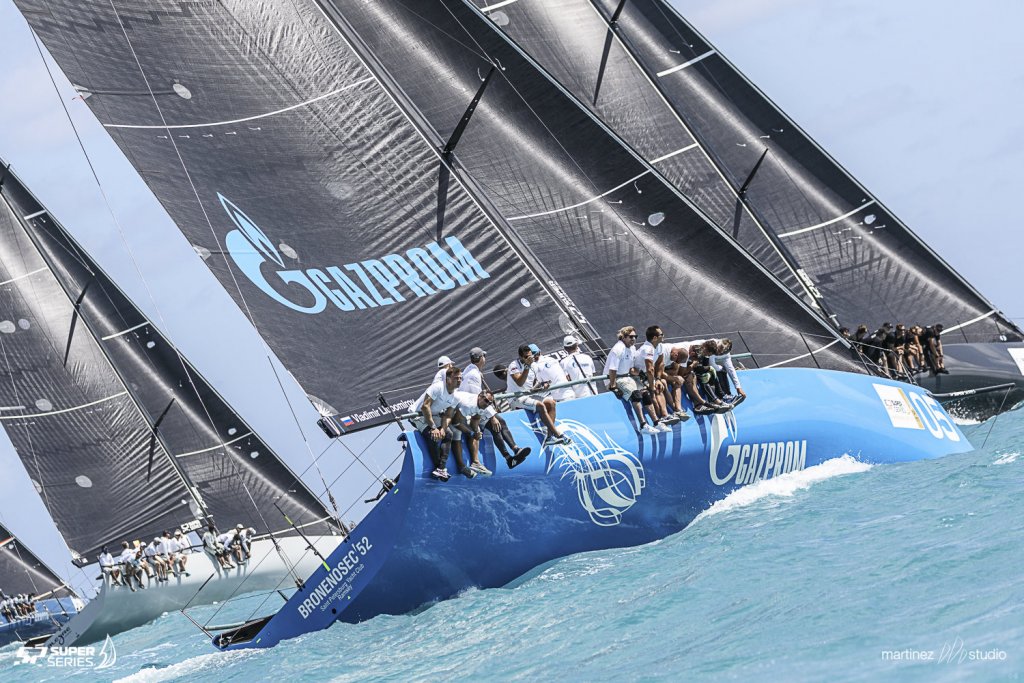 Chieffi, who is particularly strong on the waters of the Costa Smeralda said:

“I am delighted to be back with the TP52s, with a team that has so much potential, especially starting off at Porto Cervo.”

“It is sad to make a change like this, but sometimes, like with a football club or a company CEO, when you are not getting results you need to make a change for the sake of making a change. We have all the pieces to get better results than we have been getting. We are fast enough, I don’t think we are lacking there, but it seems like there are just little percentages here and there that we need to improve on. Starting has been a weakness and you can’t live with that in this fleet.” 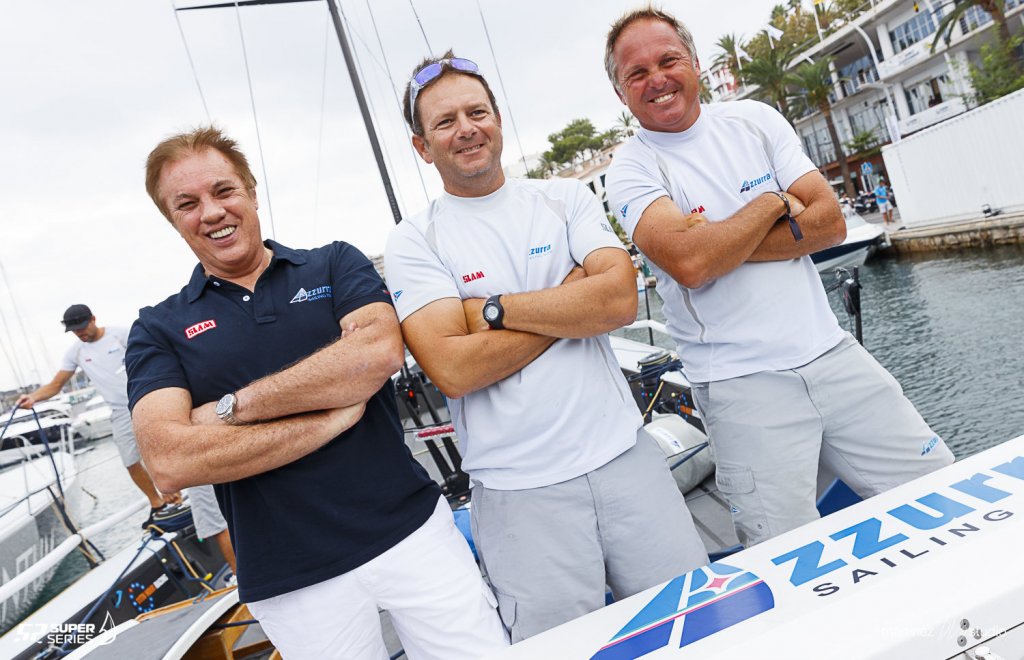 The Azzurra crew are back on home turf.

On their home waters, confidence is high in the Azzurra team, representing the Yacht Club Costa Smeralda. The winners of this season’s 52 SUPER SERIES Miami Royal Cup are searching for every small improvement, but are fundamentally happy with their speed package. Like Platoon’s strategist Jordi Calafat, tactician Vasco Vascotto starts a second consecutive week of racing on the Costa Smeralda. Skipper-helm Guillermo Parada comments:

“We need to improve our consistency a little bit. We sailed well at the beginning, and at the end of the regatta in Scarlino, and we need to take those bad days out of the equation if we want to have a chance at the end of the season. We need to be sure in Porto Cervo that we are consistent every day.

I think there are a couple of good boats to keep looking at now rather than just Quantum, so we have to keep working all the time. We really just focus on ourselves, on what we are doing rather than who is on what boat; we look to do the very best we can, and if we do that we should be in a position to win.”

After breaking their rig in training before the 52 SUPER SERIES Miami Royal Cup in March, the French team of Jean Luc Petiithuguenin, Paprec, are back and ready to race in Porto Cervo, a venue they particularly like. They have recruited 2012 Finn Olympic bronze medallist Jonathan Lobert as spinnaker trimmer who complements Laser World Champion Jean Baptiste Bernaz, who sails as tactician on Paprec.

“So far, so good with the rig. We have just a little bit of work to do with it before we go. But we are happy to be back with the fleet. It is good to be bringing in these good guys who are not only good sailors, but who bring a new energy and spirit to the team.”

The Porto Cervo 52 SUPER SERIES Audi Sailing Week will take place from 21-25 June, with races starting at 13:00 CEST every day. Track the boats via state-of-the-art Virtual Eye at www.52SUPERSERIES.com/LIVE or via the app.