Quantum Racing steered by team owner Doug DeVos won both of the 2014 season’s first races for the US 52 SUPER SERIES at Quantum Key West regatta making the best of the very light and difficult racing conditions, narrowly holding off the current world champions Rán Racing at each of the finishes. 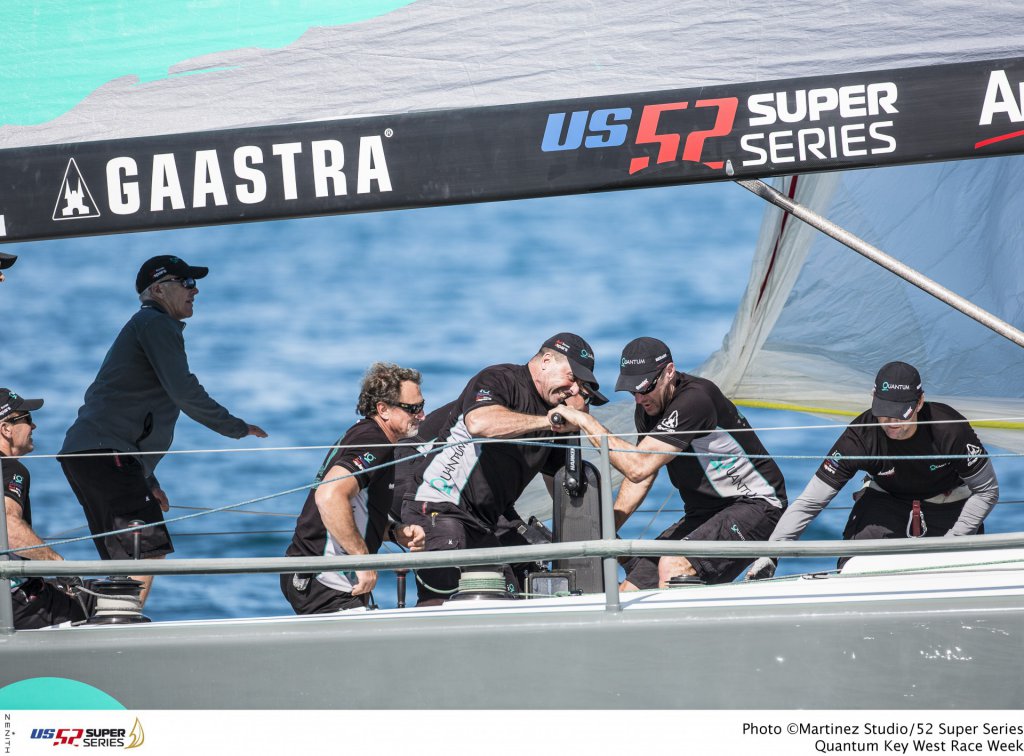 Quantum Racing came from behind to win a long, slow first race, easing past long time leaders Rán Racing in the final minutes of the last run. Niklas Zennström’s crew slowed when they lead into lighter airs and DeVos’ team proved able to squeeze through inside them to score a well earned first gun.

In the second contest it looked as if Quantum Racing had given up most of a 100 metres lead when they were forced to gybe away from the bad air of two maxi yachts, dropping into a nasty hole in the wind. They were only just able to stay in front of Rán Racing at the finish. 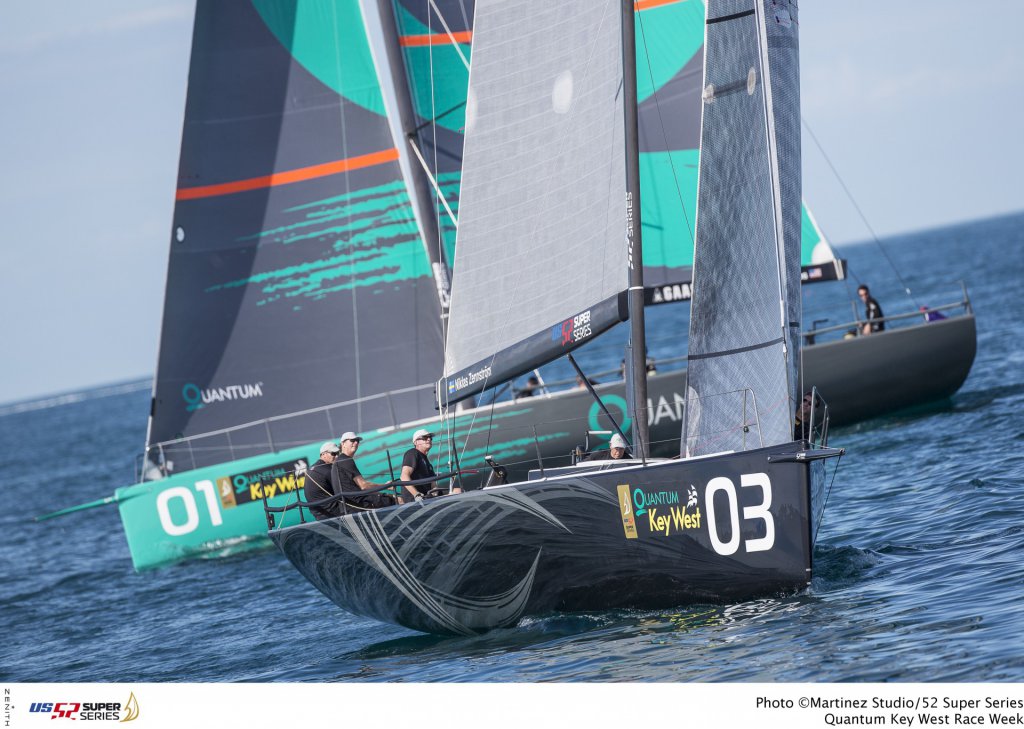 The fitful breezes amounted to no more than eight knots at the very most, and for much of the time the six TP52s were racing in winds of 5 to 7kts on an arena which was peppered with changes in wind direction and very quiet zones which were always evolving and very hard to read on the water.

Quantum Racing, the current 52 SUPER SERIES champions, made something of a slow start off the line in the first race.

DeVos, having been away from the helm of the TP52 for eleven months, immediately found his team on the back foot, struggling to get up to speed for the first few minutes of the season. In contrast Rán Racing came off the pin end of the start line with a well timed opening, with good pace and were able to lead comfortably around the course.

But with the combined talents of Ed Baird looking at the big picture as strategist and Terry Hutchinson calling tactics, the champions kept chipping away, making small gains which then turned into a solid advance at the top of the second beat. A couple of good shifts and additional wind pressure and they were able to keep the pressure on Rán Racing down the last run.

As pathfinder, Zennström was between a rock and a hard place, always leading into the gentler breeze, as Hutchinson was quick to acknowledge later:

Rán Racing just kept touching the lighter air first and it was one of those situations that you hate to be in the lead, so we managed to get down inside of them and sneak around them at the finish.
Terry Hutchinson

In the second race it looked for the all the world that Quantum Racing had built themselves a commanding lead. But it was the unfortunate influence of two slow maxi boats rolling down on to them that forced DeVos crew to gybe away at a very difficult moment:

We had to gybe away only because we were getting rolled by two maxi boats, which we really really did not want to do. And Rán was able to escape but when we came into the finish we were two lengths ahead of them, we had given up about 100 metres are that point and so it was good to win that race.
Terry Hutchinson

I would say we got really lucky in the first one we gained a lot of distance back on Rán Racing and Azzurra who were quite launched down the first run. We had a good exit from the bottom mark and sailed a good second beat and passed Azzurra and then we rounded about six lengths behind Rán Racing and they kept touching the lighter air first and it was one of those situations that you hate to be in the lead and we managed to get down inside of them and sneak around them at the finish.
It was a well sailed race, but we were a bit lucky. The second race was a well sailed race and we got away and then we had to gybe away because we were getting rolled by two maxi boats, which we really did not want to do. And Rán was able to escape but when we came into the finish we were two lengths ahead of them, we had given up about 100 metres are that point and so it was good to win that race.
But as we know it is a long series here, this is great first day for us, but it is no more and no less than that.
Terry Hutchinson (USA) tactician Quantum Racing (USA)

It was a very tricky first day with the very light winds, lots of snakes and ladders and so anything could happen. We lead the first race. We had a good start and kept the pace on while the other boats were quite slow, and then in the last downwind both Quantum and Azzurra came back with wind from behind us and really there was not much we could do. They just got down just ahead of us. Quantum Racing were well ahead in the second race but they gybed away and we just kept on and when we were coming back it was very much the same situation as the first race where they managed to get on top of us and passed. And so they beat us in both races but really only by a few metres. We are actually quite pleased with the way that we sailed today. We are annoyed that we didn’t come out in the end with equal points with Quantum Racing but we sailed the boat really well and did not make many mistakes, so we are actually quite pleased.
Niklas Zennström, SWE, owner-driver Rán Racing, SWE