It could be said that challenge to be fully race ready for the new 52 SUPER SERIES season stepped up a gear when Germany’s Harm Müller Spreer launched his new Vrolijk designed Platoon in Dubai. In Auckland, New Zealand sea trials are presently under way for for the new Provezza. The new Quantum Racing is on the way to the water for the first time, Azzurra are not far behind. Rán Racing, Alegre and others are getting ready to splash.

In total nine shiny new-generation, freshly built boats are expected to take the start line in Valencia in May (18-23rd) for the first of the five regattas which comprise the 2015 52 SUPER SERIES. Up against them will be four existing TP52s which raced during the 2014 season, sporting existing or new team colours, making an expected entry of 12-14 boats.

This level of new build activity confirms the 52 SUPER SERIES as the outstanding grand-prix monohull circuit in the world. The series is bringing together not only a cross section of the best sailors in the world, but it has proven extremely attractive to committed, high level owners. And the trend for 2015 is definitely towards owner driven boats. Of the 14 boats which will race, eleven will be steered by the owner.

The pathways to be race ready and fully competitive on the first day of the 52 SUPER SERIES are well worn for the TP52 class which has seen more than 60 boats built since 2005. To build in the Southern Hemisphere allows earlier sail trials in reliable summer conditions. But it incurs shipping time, and -usually – stress. Building in Europe makes the construction process accessible and allows first sea trials and training to dovetail into the regatta season. This time three boats have been built outside Europe. Launched today (Thursday March 5th) in Auckland is Ergin Imre’s new Vrolijk designed Cookson built Provezza. 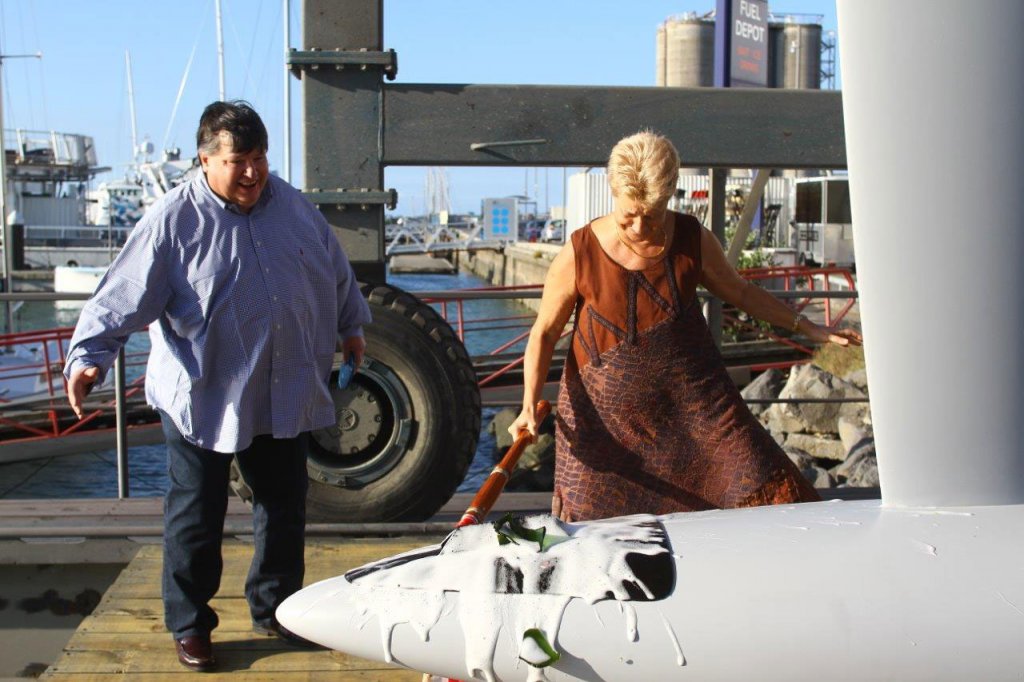 Ultimately being ready for the first points race in Valencia is what counts. But at least six of the new boats will refine their settings and crew work at Gaastra Palma Vela regatta (30th April to 3rd May, Palma Mallorca). It is the perfect opportunity to learn the new boats in a full on racing environment, and of course the first chance to measure up against the opposition.

The middle of this month is about to see the majority of the European launches.

Doug DeVos’ 52 SUPER SERIES champions Quantum Racing have their new Botin design going to the water now from Longitude Cero in Burriana, Spain. It is the third Quantum Racing 52 to be built there. After initial sea trials the crew will train out of Palma, Mallorca for the week just before Easter. Doug and Dalton DeVos are expected to play a more active role in their programme this season.
Quantum Racing’s hull sister Alegre is close behind and will be launched off Burriana the week 5-8th April. They will test off Valencia 13th-17th April and then head to Palma for nine or 10 days of training leading into Palma Vela. 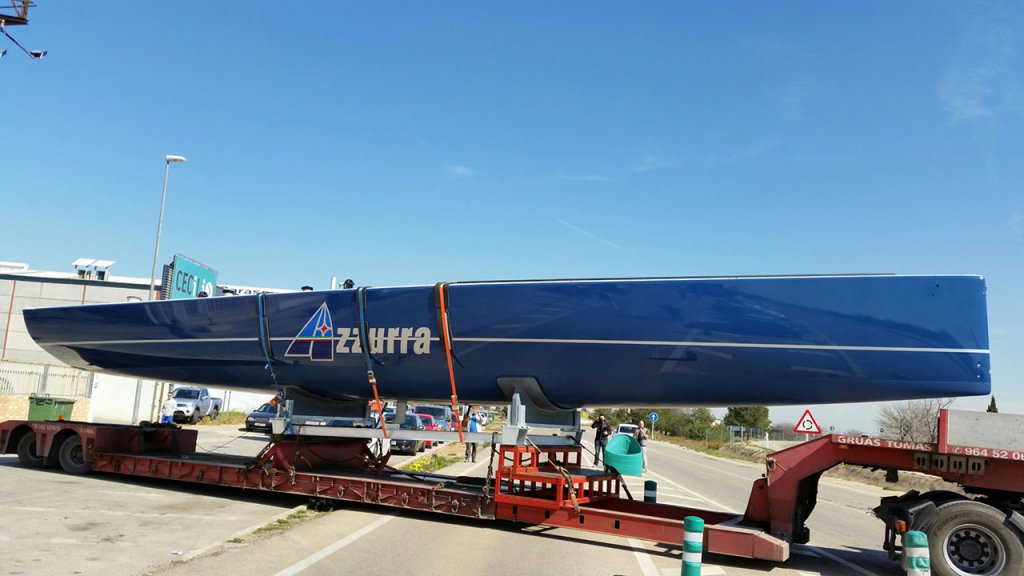 Almost simultaneously the new Botin designed Azzurra goes in the water for the first time, being made launch ready at the Valencia Victory Challenge base by the crew and builders King Marine. They will train on Valencian waters from March 18th for one week alongside their sparring partners Phoenix, Eduardo de Souza Ramos’ Brazilian boat which is fully updated to the 2015 rule.

Tony Langley’s Vrolijk designed Gladiator has been overseen by Jason Carrington at Persico and will leave Italy later this month to launch mid April in Valencia. Tuning and crew training will continue in Palma prior to Palma Vela. The team will be ‘very familiar’ with a couple of obvious changes. Slightly ahead of Gladiator’s timeline Niklas Zennström’s Rán Racing is completing at Persico and will debut in Valencia at the first 52 SUPER SERIES regatta.

The Russian flagged Gazprom supported Bronenosec is a mould sister to Azzurra and is due to launch early May to be based initially in Valencia out of the ex Victory Challenge base. It will be skippered by Michele Ivaldi (ITA) who sailed with Gladiator and clinched the 2014 title as navigator with Quantum Racing. The boat will be steered by Vladimir Liubomirov (RUS) with Ivaldi as tactician and Cameron Dunn (NZL) strategist.

Of the project which is new to the TP52 class Ivaldi explains:

We are obviously aware of the big challenge that we will have to face by entering such a competitive fleet and we set our goals accordingly. In the 2015 season we will learn to walk, in 2016 we intend to be running like everyone else.
Michele Ivaldi, tactician, Bronenosec

The only new generation, recently launched TP52s to sail this season so far are Platoon, in Dubai in February and Provezza, presently in Auckland. The Premier Composite Technologies built Platoon is Harm Müller Spreer’s third TP52. After a seven years hiatus the German owner has been drawn back to the class by the high level of racing, excitement and the appeal to the owner-driver. The crew already have six days of preliminary sailing off Dubai with their Vrolijk design under their belts.

We sailed Platoon with perfect conditions, from super light up to 20 knots. perfect for the structure testing. Our first sets of sails looked nice and the graphics too.
Markus Wieser, skipper/tactician, Platoon

Platoon will go in the water in Valencia early April, ready for the 18-20th April training in Valencia. They will have a second session with MOMO, ahead of Palma Vela. Then before the first 52 SUPER SERIES regatta they will train alongside Sled. Among the crew will be Daniel Fong (NZL), Seb Col (FRA) and Johan Barne (SWE).

In preliminary training and tuning action right now off Auckland is the new Provezza. They have Andy Beadsworth (GBR) steering this season but their core crew remains the same. Cookson’s in Auckland have built two new TP52s for this season, the second one is Takashi Okura’s new Sled, a Botin design. 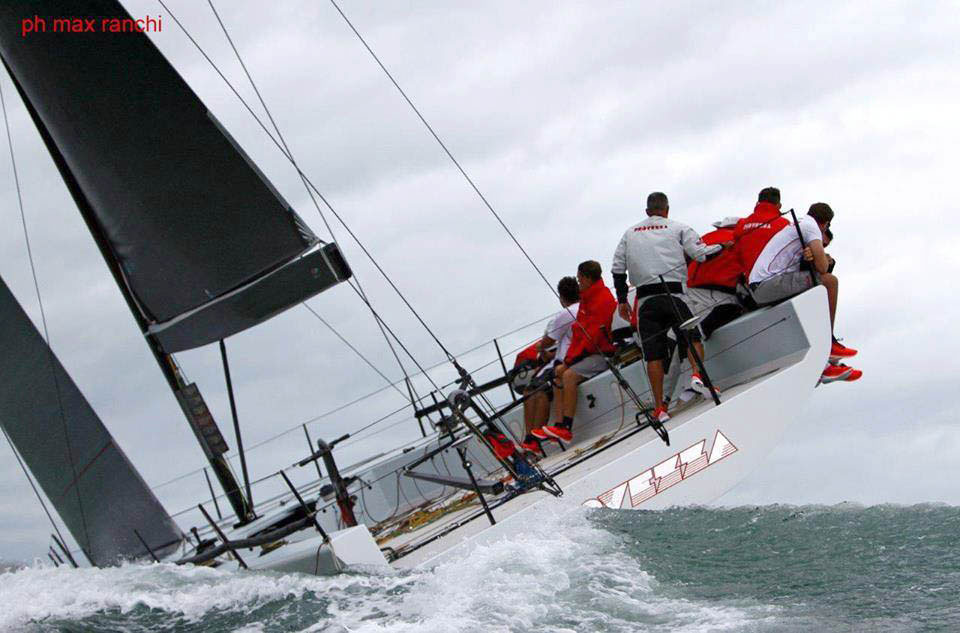 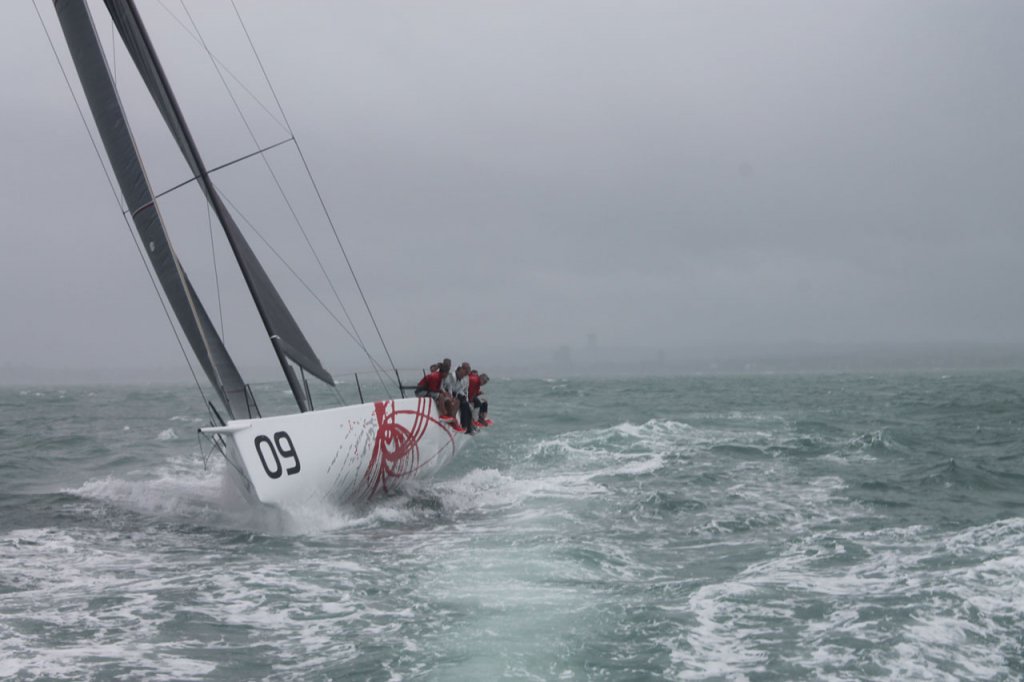 But will there be an early season advantage resting with the existing boats? Austin Fragomen (USA) has updated Interlodge and it is en route for a busy European season with Andy Horton (USA) and Dean Barker (NZL) sharing tactics and strategy respectively for the owner-driver. Eduardo De Souza Ramos showed well on his debut with the 2014 launched Phoenix. The French crew of Paprec-Recyclage have the former Rán Racing which has been updated through the winter and is due to go on the water for France’s Spi Ouest regatta before being transported to the Med. The championship winning Quantum Racing is in the hands of the crew which raced Hurakan before, now Xio Quantum. And Jim Swartz’s highly optimised Vesper which provided a notable upset in Capri, finishing second last year will come to Europe to join the 52 SUPER SERIES final event in Cascais.

I expect a very exciting season with every prospect of seeing quite a few different names at the front of the fleet. The key to success in this no discard series as always however is consistency. And so do not think that Quantum Racing will step aside from the top spot too easily.
Rob Weiland, Class Manager TP52