The Plattner family’s South African flagged Phoenix laid down a marker that they should again be podium contenders when they won today’s light winds official practice race prior to Tuesday’s start of the Menorca 52 SUPER SERIES Sailing Week.

With America’s Cup winner and many times 52 SUPER SERIES champion Ed Baird calling tactics this week, rejoining a team he was with two years ago, Phoenix moved ahead early in the practice race and proved quick and nimble in the modest breeze to win comfortably.

“It was satisfying today,”

“But now we need to replicate that a few times during this week I hope. We saw a little trend and made use of it. We came off the line a little weaker than we might have wanted to do but then Tony (Norris, helm), Paul Wilcox (mainsheet) and Morgan Trubovich did a great job of getting us accelerated and into a nice lane and then we were able to hang in there.”

Baird missed the first event of the season, last month’s Puerto Portals 52 SUPER SERIES Sailing Week, the first one he has not sailed at since 2017. With Tom Slingsby calling tactics in Mallorca, Phoenix finished third and so Baird has the bar set high.

On the dock at the Club Maritimo Mahon where the 11 competing TP52s from eight different nations docked in after the final practice today, Baird smiled:

“It is fantastic to be back here. The fleet is terrific and there are so many friends on all these boats and is great to be here.  This team have a terrific positive attitude. They are always excited to do the next thing and everybody is always itching to help out and move on.”

One tactician who is new to the 52 SUPER SERIES TP52 fleet but who has tasted success in many different classes, particularly on his home waters on the Bay of Palma, is Spain’s Manuel Weiller who is sailing on the Whitcraft family’s Thai flagged Vāyu.

“ This circuit is the benchmark in world sailing and I have always wanted to race on this circuit. I know many of the tacticians and they are the best. We have a good boat with good sails and on board we have a mix of professionals and family. We will put up the best fight we can.”

Asked what he remembered of racing in Menorca he said,

“I came here when I was a kid racing my Optimist and did a Wally regatta more recently. But this is not a place where there is any kind of local advantage. It is an open race course and the same for everyone.”

Official Launch Press Conference
The 52 SUPER SERIES were afforded a warm welcome back to Mahon and to Menorca, the world’s leading grand prix monohull circuit visiting for the fourth time. The local and island authorities recognise the positive profile the circuit generates, delivering positive, immediately understood messages about sport, tourism and sustainability on the beautiful island.

At the press conference at the Club Maritimo Mahon Héctor Pons, the Mayor of Mahón, said:

“This regatta puts our port on a world level. It is a good match, the port and the event. And the regatta also helps us to maintain a tourist income during the months of September and October. We know that the direct and indirect impact on the city of this regatta is very important and we will continue to support the 52 SUPER SERIES in Mahón whenever we can”.

“It is such a pleasure to come here and help spread the word about this beautiful island. We have an active sustainability programme here with different initiatives and actions such as collecting unused food and beach and harbour clean ups among others. We continue to tell the whole world that we must respect and care for the environment. Menorca and the 52 SUPER SERIES have the same shared commitment to caring for our environment and that is why we are proud to be able to come to race here.”

The President of the Consell Insular Susana Mora, stressed:

“The 52 SUPER SERIES represents a great opportunity to position Menorca as a sustainable destination as well as making our island known to the world. As Menorcans, we are very grateful to be able to host this circuit that keeps growing and gaining a bigger following than ever, for the fourth time.” 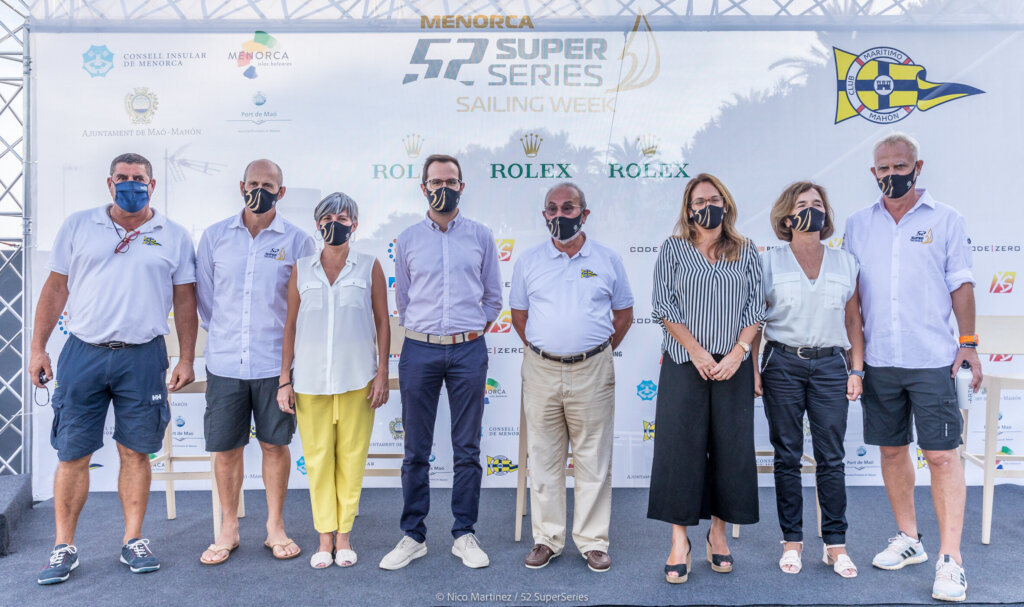 No Racing, Platoon Lead Into Final Day in Menorca

Platoon Pile On The Pressure

On Form Alegre Dominate in Menorca

52 SUPER SERIES Fleet Set to Line Up in Menorca