The Coliseum was the most uncompromising of Roman arenas. When opportunity presented itself, a gladiator had to be ready to grab it without hesitation. Those who did consistently became legends. The rest, well, let’s just say it wasn’t a place dripping with second chances.

With his recent purchase of the former Interlodge, the newest addition to the dozen-strong 52 SUPER SERIES fleet, British owner-driver Tony Langley has channelled the assertive spirit of the Roman warriors for which he names his boats. He sidelined his two-year-old Judel/Vrolijk boat, named Gladiator, in favour of a Botín design, now of the same name, with less than two weeks of sailing time under its keel. 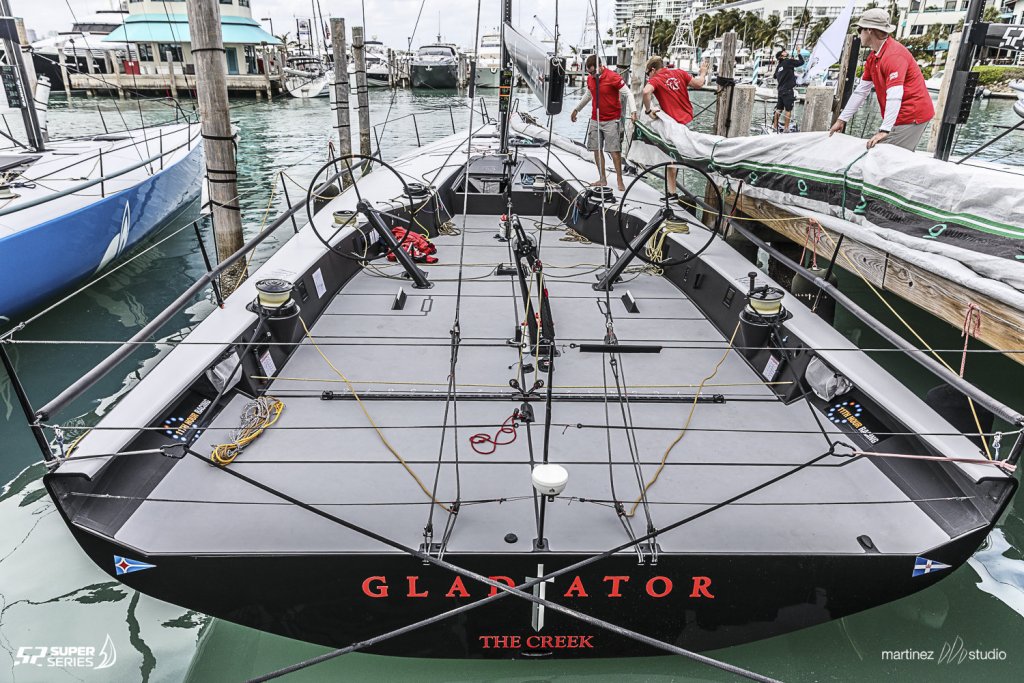 The new boat debuted at 2017 Quantum Key West Race Week in January, and showed quite well, but a change in plans for original owners Austin and Gwen Fragomen made the boat available. Langley and his crew pounced.

The 2017 52 SUPER SERIES Miami Royal Cup, which starts today and runs through Saturday off Miami Beach, will be the Gladiator team’s first regatta in the new craft.

“There’s a pretty clear pattern that the development, that the Botín office has been doing, is successful and has been going well,” said tactician Ed Baird, who is a new addition to the Gladiator program after many successful years with Quantum Racing, the SUPER SERIES defending champion. “This will be the first opportunity for Tony and his team to sail a boat from that design office. So it’s going to be a great experiment. I’m excited that Tony was willing to take the risk and make it work.”

The abnormally windy weather over the past few days in Miami has made pre-regatta training difficult – most teams didn’t sail Sunday or today – and has stalled the Gladiator team’s efforts to get to know its new boat.

“We were given the opportunity to check the systems and look at some of our sails before this event,” said Baird. “But we really haven’t been able to sail against anyone.”

While this lack of familiarity with the new boat will put the Gladiator program on the back foot in the 52 SUPER SERIES Miami Royal Cup, there is plenty of reason for optimism. Six weeks ago, the Interlodge team was dealing with the same challenges. That crew won back-to-back races on its third day of racing and finished just two points out of second for the regatta.

Baird also noted that the switch will help the team better optimise its training and data-sharing partnership with 52 SUPER SERIES competitors Quantum Racing, also designed by the Botín office.

“When we have a good day or a bad day we can look at it and understand why,” said Baird. “If we have a similar piece of equipment to Quantum and we’re able to sail around the course with them and make a mistake and get beat, we know it was the mistake. But if we don’t have a similar piece of equipment, we’re not ever sure if it’s something we’re doing or it’s the equipment that’s doing it.”

The older boat is actively for sale, and it’s not expected to return to the 52 SUPER SERIES circuit. But Baird said its career as a sailing thoroughbred is far from finished.

“The [older] boat is going to continue to compete in other races,” said Baird, “and I think it’ll be very successful.”

Barring a sale, Langley may keep it in the United States to compete in summer regattas in the Northeast while the new boat and the rest of the 52 SUPER SERIES fleet heads to Europe for the final four events of the 2017 schedule.