Hotter in July: challenges and opportunities at the Royal Cup

Challenges or opportunities? Ibiza, as a new venue to the 52 SUPER SERIES, is set to present both over the course of the next five days of racing for the Royal Cup and it will be the team which stays cool in the summer heat and makes the most of the unfamiliar race arena which should land the prestigious regatta trophy, the second of the European season. 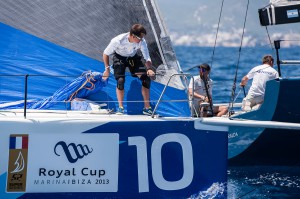 If the official practice race, which was contested today (Monday), is anything to go by, that might be a 52 team which has not yet won a regatta this season, either in the USA or in Europe.

Indeed it was two of the fleet’s older boats which prospered in a slightly hesitant sea breeze, thought to be typical of what is expected for the next few days.

Tony Langley’s Gladiator, with Chris Larson calling tactics, were able to take the lead on the second round, going on to win ahead of Jean-Luc Petithuguenin’s French flagged Paprec, which is at their first 52 regatta of this season. The French crew showed no lack of pace in the light going.

With Rán Racing’s coach Thierry Peponnet, Olympic 470 gold medallist, deputising for owner Niklas Zennström on the helm oonly for the practice race, Rán Racing’s took third place after starting early and having to climb through the fleet.

In these conditions every team will have some opportunities to win. During this week will be more a question of keeping one’s head than of boat speed.
Azzurra’s Vasco Vascotto states succinctly

Easier said than done, perhaps, on a course area which proved to have little in the way of a regular breeze pattern today. 52 Super Series leaders

Quantum Racing’s tactician Terry Hutchinson – renowned for his positive outlook – sums up what Ibiza could be like out on the race track.

Looking at the next three or four days it is going to be light, it is going to be hard sailing as we saw today it is going to be not how you start but how you finish. I’d say it is a venue which will create a lot of opportunities and when you are in the lead you are better not to look behind you because that will lead to wrong decisions. I think for us in particular we still have a lot of improving to do. It is a solid opportunity for us to get better. In the meantime we have to survive some of the communication mishaps we have. We did good work in overcoming some of these things that happened in Barcelona, but in Barcelona it was windy and we were fast. It is what you see here that will count and so we are good with having good eyes on the boat in Jordi (Calafat), in Juan (Vila) and Ed (Baird, skipper).
Terry Hutchinson, Quantum Racing

Sun Factor
The TP52’s raced in Ibiza seven years ago and there are crews who might remember that event, but that 2006 regatta was in September at the end of the season. Conditions are likely to be different in early July. 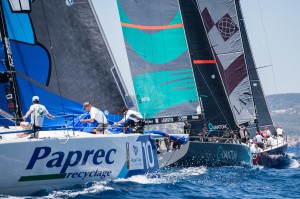 Daytime temperatures peaked in the high 20’s today but the forecasts suggest it will be high 30’s as of Monday. With the breeze swinging around a little, rising and falling, days are quite likely to be long and hot under the fierce Balearic sunshine.

Quantum Racing’s 1992 Olympic gold medal and America’s Cup winning strategist Jordi Calafat is Balearics born and bred and knows the Ibiza waters, mainly from cruising. His own native Bay of Palma, being so close and better in terms of the reliability and strength of the sea breeze, means that the Majorcan capital attracts most big events and Ibiza has never really established itself as an international regatta venue.

Calafat is expecting a stressful regatta:

There are two typical directions, E’ly and SE’ly and sometimes they are fighting one another. But it is an interesting place, a little bit on the light side compared to other events. I don’t know what we will be like. Our boat handling was a big part of our performance, here it will be more loose and open in the light breeze. It will be more difficult for the strategists. It can be two wind directions and so it will be a stressful week for me!
Jordi Calafat, Quantum Racing

The Royal Cup is based out of the new Marina Ibiza where a press reception was held this Monday evening for local media to be introduced to the regatta and reflect on the positive economic effect of hosting the 52 SUPER SERIES. It was hosted by Daniel Marí (Marina Ibiza director), Joaquín Jiménez (director of the Autoridad Portuaria (Harbour Authority) Ibiza), Agustin Zulueta (CEO 52 SUPER SERIES) and Jordi Calafat (Quantum strategist)

For us it is very important to have this regatta here. We can say that the 52 SUPER SERIES is one of the biggest sporting events for the island this year.
Daniel Marí commented

For us Ibiza means something very special. We only organise two independent, standalone regattas each season, Miami and here. That is because we want to come here to Ibiza and hopefully to have a long term relationship with this venue.
Zulueta said

It looks like the week will be 10 knots, maybe below that and a bit choppy. The sea is crossed a bit, it does not follow the wind direction and so it will be difficult. You have to trim the sails very differently from one tack to the other, and have the crew trim fore and aft. But it is still sail racing. You have to sail well and get the shifts right. It is a very nice venue. This is my first time to race here. Conditions are nice.
Thierry Peponnet, FRA, coach Rán Racing (SWE)

I sailed here when I was young which was a few years ago. I cruise here quite a bit. Typically it is lighter than Palma because the sea breeze is not as effective here because the island is smaller. There are two typical directions, E’ly ir SE’ly and sometimes they are fighting one another. But it is an interesting place, a little bit on the light side compared to other events. I don’t know what we will be like. Our boat handling was a big part of our performance, here it will be more loose and open in the light breeze. It will be more difficult for the strategists. It can be two wind directions and so it will be a stressful week for me!
Jordi Calafat, ESP, strategist Quantum Racing (USA)

We were quite happy with the speedof the boat, it was interesting today to get the chance to compare with the other competitors. We started on the left side because we saw some shifts on that side, we were happy to go there with Azzurra. We were the two first boats after the start. On the second lap Gladiator went really well upwind, they went to the right hand side.

We were happy to finish in second over the line. If the wind stays around 10 – 12 knots this week its good for us but if its higher its more difficult.
Jean-Charles Monnet, FRA, navigator, Paprec (FRA)