(Tuesday, 7th July 2020) – Galicia in the wild and stunningly beautiful north of Spain, and chic and elegant Saint Tropez, two very different and contrasting venues, will both feature highly as the world’s leading grand prix monohull circuit, the 52 SUPER SERIES, bounces back for what promises to be an exciting and engaging 2021 season. 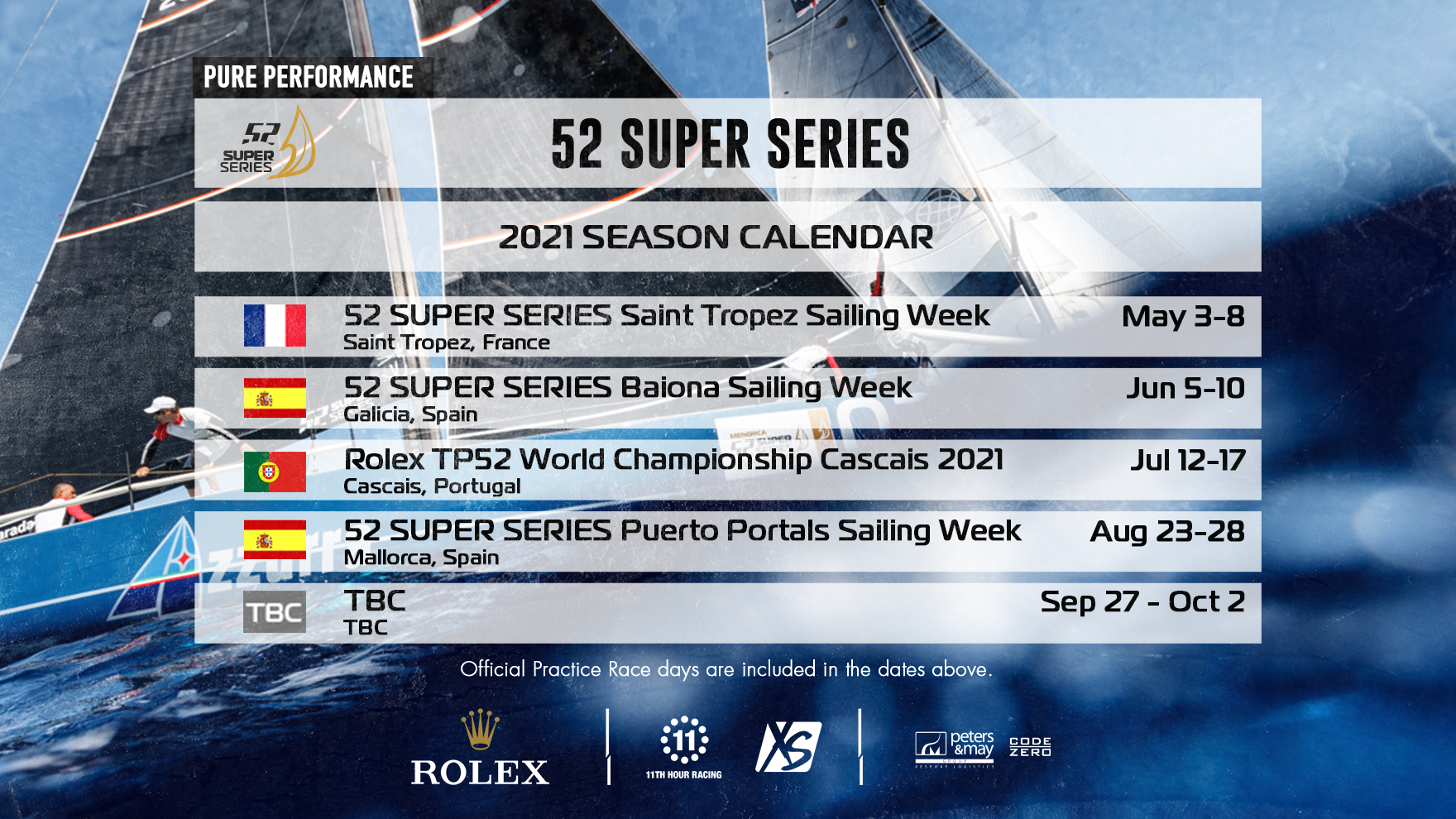 “There is no getting away from the fact that 2020 has been very limited and so we feel we have pulled out all the stops to offer our owners, crews and the global fanbase a great opportunity to join is at venues that are new to us, places which are very much in keeping with our fundamental principles of visiting different places together as well as sharing our love for the well-established favourites,” smiles Agustin Zulueta, CEO of the 52 SUPER SERIES.

The five event 2021 circuit will open from May 3-8 in Saint Tropez, a jewel in the crown of the French Riviera. Most 52 SUPER SERIES sailors are well acquainted with the Golfe de Saint Tropez having raced there at different mixed fleet regattas, indeed many have raced TP52s at Autumn’s classic Les Voiles de Saint Tropez. Now the 52 SUPER SERIES are responding to the desire of owners and crews for a standalone circuit regatta there. It is a popular move, not least among the circuit’s French crews.

In early May the waters off Saint Tropez can offer everything from light gradient or sea breezes to the strong northerly Mistral.

Then from 5-10 June the circuit heads north to Baiona, a small but renowned coastal resort in Galicia’s Pontevedra region, to the SW of Vigo. A warm welcome is expected from the local hosts who have been campaigning for a number of years to bring the circuit to waters where so many top Spanish offshore and ocean racers cut their teeth.

Platoon’s double world championship winning Victor Mariño, a native of Vigo, can hardly contain his excitement that the circuit will visit his home waters.

“There are so many sailors and fans of the 52 SUPER SERIES and the TP52s who follow the circuit and watch all the broadcasts, it is a dream come true to have the circuit. It is super beautiful there, sailing in a huge bay round islands. The conditions will be nice at that time of year. And I am sure the sailing community there will put on a huge party to welcome us.”

Earlier in 2020 Diego Torrado the Galician boat captain of South-African-flagged Phoenix 11 was high on the enthusiasm of his South African teammates hosting the circuit in Cape Town for the first time. Next year he will be able to reciprocate the pleasure when the second regatta of the season reaches Galicia.

“Baiona is one of the most maritime places in Spain and has a history linked to the sea for many centuries. Life there is focused on the sea and the city deserves a competition like this. And I think it will be such a new challenge for all the sailors, many of them the best in the world, to race on the Galician coast, very different to the Mediterranean. The Vigo estuary area, being protected, gives wonderful sailing conditions, but we must not forget that we are in the Atlantic,” says Torrado.

In July, the third event of the year sees a welcome return to Cascais where the Rolex TP52 World Championship will take place from 12-17th July. It will be the second time that the Rolex TP52 World Championship has been hosted there and memories remain fresh of the fantastic, breezy, wavy conditions over the corresponding, same week in 2017 when Quantum Racing won by three points ahead of Azzurra.

And the love affair with the Bay of Palma continues as the fourth regatta sees a return to another favourite destination, from August 23-28 in Puerto Portals.

The venue for the fifth regatta of the season has yet to be confirmed and is under discussion with 52 SUPER SERIES management at the present time.

“We are pleased with the venues, which offer a mix of new and very well known places, and hopefully we will have an incredible season in 2021,” says Guillermo Parada, skipper-helm of reigning circuit champions Azzurra.

“Measuring to any standard at all you cannot fault a circuit that offers Saint Tropez – Baiona – Cascais – Puerto Portals – in terms of the sailing and the social mix when we try to restrict ourselves to the Western Med and Iberian Atlantic coast. I do hope we will be able in 2021 to have another go at the TP52 Class 20th Anniversary Invitational. Many were looking forward to this regatta and the opportunity to see 20 TP52s racing together, and we will do all we can to make it happen.”

Official Practice Race days are included in the dates above.