Fry’s Eyes on the Prize…. 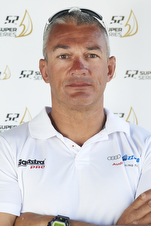 Simon Fry of North Sails is a long time member of the Audi Azzurra Sailing Team, and was previously with the team when they raced as Matador. Here he shines some light on what he sees as some of the key reasons for their success this season:

What has been the difference this season?

I think the team has really endorsed the leave nothing to chance philosophy. I think we have just been a little more diligent, left less to chance. But it is sailing and there is always chance. Last year we took the lead inCartagena and the main came down and that was quite a salient moment. And for instance, that main strop broke when it was still well within its programmed life period, but that period has not been halved.

I think the boat preparation has been excellent. The shore crew did a really excellent job, and that started when they built the boat. The saved any weight they could but eliminated any chance of failure. So, light and strong, perfect…the sailing team’s dream.
“I think that in the sail programme we structured our sail buttons well, we came here able to button in a new light jib and that was a godsend, it really was. The work we did on the rig in the winter with Paul Westlake and Southern Spars we got a stiffer tube, we could carry more headstay tension, these little incremental gains add up.

And I think that on top of that we had the human element of a really, really steely focus. It was ‘the time has become, we have to deliver’. We have had the hardware in the past and failed to deliver. A bit of personal pressure on, and a bit of peer pressure, this was the year we had to deliver.”

You seemed to build an impetus very early and hold on to it here?

I think that momentum is such a big thing in sport. We came to this regatta not confident, but it is almost like you can’t stop someone else’s momentum without building your own. It is not like a boxing match where you go and hit them hard.

I was surprised that on Friday’s first race they elected to go to the right. Our thing was just to try and take one or two points off them whenever we could. Luckily for us it all came in a glut on the first day. If we had been in their position and had ended up so separated from the fleet, I know our coaches would have had an aberration, they would have gone absolutely apoplectic. So I was surprised. They could have lead at the top mark, but the risk was that they didn’t.

I would rather have a sporting chance, go head to head.

And the match racing element, you dealt with the challenge well?

We felt that they would come at us from Day 1. Guillermo put his hand up and said ‘I know I am a very good driver in a straight line, but match racing is not my area of expertise, we have someone in Cecco (Francesco Bruni) who is ‘current’, and he was happy to take it on.

What else has changed, is the approach much the same as it always has been?

I think we as a team are much happier in general with a less structured approach. So for instance they like everything mapped out as their daily routine, and it has been thus since 2008. We, or perhaps certain members of the team, are perhaps happier with a less structured approach. That is kind of what happened in the pre-starts where they came at us. Our philosophy was that if the opportunity presented itself we take it.

There was one time where when the Soto 40’s were finishing we pinged the boat, we sailed to the other end to ping the pin and suddenly they presented themselves and that was it. We had a controlling position. Whereas maybe if the shoe had been on the other foot, maybe we would have been looking out to not be in that position. It has been really good fun.

And closing out events has been a weakness, you lost out on the last race on your club’s waters….

One of the thing that we looked at was that we had lead going in to events before, and only on a couple of occasions have we closed out for the win. I think we have gone in five times and won twice.

So that was hard to take inSardinia, where the race was over 15 seconds before the start. Guillermo showed sound judgement and wide shoulders after that and said what’s good for the team. That focussed the team. And eight or nine of the team have been inArgentinaand did three days of match race training. They arranged two Soto 40’s and went head to head. I think that made the difference here, just so that when someone comes at you it feels natural.

And Rod Davis brought a lot to the programme?

RodDavis has brought an element of reinforcing what coach ‘Backchat’ Guillermo Baquerizas has said. So it is fantastic, and slightly unplanned, he has not been the direct coach, but he has supported and reinforced everything coach has been doing. And it has been great for me because I have roomed with him. He is a great guy to bounce ideas off. He loves yachting and the heritage of yachting. And I think he is bright in latching on to the Latino temperament, and he has spent time of course with Brava and Luna Rossa, and so he ‘gets it’. He is very good at asking questions, loaded questions, where he knows what answer he wants to get, but he asks the question. Like yesterday morning he asks ‘if this scenario occurs, what do you want to do…he knows the answer he wants, so he poses the question and we answer with ‘we would rather continue with the ‘chaos theory’ and he says that is fantastic, I don’t want it to be too structured.

There is an element of freestyle about the team and that has not been lost. The unstructured approach, if you like, has been good in the long term. You look at Vasco and Cecco and they are creative. They are quite happy to do two tacks in 100 metres it they think it’s good. They will back themselves.

Looking at objectively as their nearest rival, you must have evaluated Quantum Racing’s strengths and weaknesses?

I think it must have hurt them coming into this regatta without any sail buttons. Our research suggests they had no buttons left. They did not have a brand new light jib.

I think Brett and Matt not being able sail has had an effect, two key components.

Small things in their set up we have tried to do differently, right or wrong, but I do think we have been pretty quick at this regatta.

Overall we have come 30 races and we are still very very close. On top that Botin as made us a couple of tweaks. Our boat has a weeny bit more rocker. I think we are a little bit faster in the chop for that. There are areas in our performance profile where we suffer. We were told that at the beginning of the year. But the boats are very close.