Eight 52’s will race next week when the 52 SUPER SERIES is hosted for the first time on the Balearic Island of Ibiza. The second European regatta of the season, the Royal Cup, reflects the initiative of the owners to choose venues which are a mix of established, key regattas and standalone regattas at desirable, perhaps less well known locations.

Ibiza may have a global reputation as a holiday destination but it is the chance to compete on an equable racing arena which is not very well known by the crews and so offers a new set of challenges that has been just part of the attraction. Summer weather, reliable sea breezes, the island ambience and of course the range of upscale accommodation, restaurants and bars add support the choice.

For the first time this season the racing programme includes a coastal race. Scheduled for Thursday the longer course options include a circuit of beautiful Formentera Island which is around 45 miles. The chances to utilise specialist reaching sails and work on a more open race track is one which may see different 52 teams coming to the front of the fleet.

In Barcelona last month it was the Ed Baird skippered Quantum Racing, with Terry Hutchinson calling tactics, which prevailed to win the first regatta of the 52 SUPER SERIES. Their afterguard includes Spain’s Olympic gold medallist Jordi Calafat as strategist, a sailor whose knowledge of the Ibiza racing waters might be a significant asset. 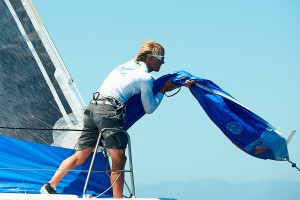 Returning to the 52 SUPER SERIES for the first time this season is Jean-Luc Petithuguenin’s Paprec Recyclage. The crew which is lead by skipper-helm Stephane Neve, a former prominent French sailmaker now working in Petithuguenin’s recycling business, has been together for many year and is predominantly amateurs. Among the Paprec crew are a doctor, engineer, supermarket manager and a factory manager. Neve explains:

We have had some good racing together this season already in a variety of conditions, but to be honest there is not much at home at Brittany which prepares us to come and race on the 52 SUPER SERIES, but that is why we come. We love to race against the other 52 and some of the best sailors there. It helps us learn and raise our own level. In the fleet there are so many boats can which can win races but some have better chances than others. We have to keep our budgets to a realistic level and so, for example, our shore crew sail on the boat. But if we can get one or two finishes in the top five we will be happy.
Stephane Neve

Having opened their racing season at Spi Ouest regatta in Easter’s snow off La Trinite, 30-35knot winds and hard condition, followed by the 500 boat Bell Isle race, the 320 miles ArMen offshore race, the team are looking forwards to Ibiza, and next month’s Copa del Rey where the owner will sail.

Racing at the Royal Cup, based out of the new Marina Ibiza, starts on Tuesday with a full diet of windward-leeward races running through until Saturday.

Marina Ibiza is promoted as the “floating catwalk”, the ideal place to see and be seen.
For sure besides a dazzling array of large yachts there is plenty to see in the on site Club Restaurant Cabaret Lio, owned by the Pachá Group and famous for its shows, the Blue Marlin trendy restaurant and lounge bar and the Calma terrace-restaurant.