VALENCIA. (29 April 2015) – While the tuning and training process for latest generation of new TP52s revs up through the gears this week and into the weekend, the fact that the first races of the highly anticipated 52 SUPER SERIES are looming just around the corner was highlighted today with the lauch of the Ford VIGNALE Valencia Sailing Week at the iconic Veles e Vents building today.

Ford VIGNALE Valencia Sailing Week is now less than four weeks away. The prestigious regatta, which raises the curtain on the 2015 52 SUPER SERIES, starts on 18th May with the first points of the season on the table. Nine brand new TP52s and three established well known boats will comprise the biggest and most competitive 52 SUPER SERIES regatta yet. The twelve TP52s represent nine different nations. Racing runs through until Saturday 23rd May.

Valencia is a popular venue well known to the TP52 Class, not least from hosting the 2010 TP52 World Championships. The fleet have raced off the Malvarossa Beach many times and it is a challenging race course. Many of the class’s leading contenders spent many days racing and training there when the city was host to the America’s Cup. 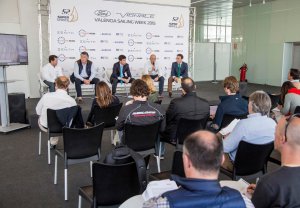 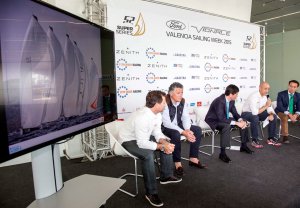 During today’s presentation to the media, Agustín Zulueta, the general manager of the 52 SUPER SERIES commented,

We return to Valencia with 52 SUPER SERIES with considerable enthusiasm and it is nice to be coming back with the class showing strength and depth. The circuit has grown and represents the best performance monohull circuit racing in the world thanks to the trust of the owners of the class and of the venues and cities hosting us. We return to Valencia excited byt the prospect of nine new boats. And it is a truly international regatta with teams carrying the flags of nine countries.
Agustín Zulueta, general manager 52 SUPER SERIES

We think that the economic impact for the city is around two million euros. Bear in mind that four boats have actually been built in the Valencia Region and that most of the boats have already been or will spend several days training here prior to the start.
Agustín Zulueta, general manager 52 SUPER SERIES

For the Region is very important to return and host a prestigious event of this magnitude.
Matteo Castella, director general of sports for Valencia

Lars Boecking, Director of Valencia based Jacaranda Marketing, underlined that the circuit will be embracing a high level of environmental responsibility:

We have teamed up with 11th Hour Racing, the Official Sustainability Partner of the 52 Super Series, to integrate environmentally responsible practices into our events. This is a topic which we know to be dear to the hearts of our participating sailors and we look forwards to all working together and adopting best practices in this field.
Lars Boecking, Director, Jacaranda Marketing