(Thursday 20th June, Puerto Sherry) – Azzurra learned a lesson from their fifth place from the first race to be sailed at the Puerto Sherry 52 SUPER SERIES Royal Cup today. Applying that lesson was the passport to a comprehensive win in the day’s second race, which sees the Italian-Argentine crew back at the top of the regatta leaderboard after six of ten races have been sailed.

During the first contest, which was sailed in an 11-13kts sea breeze, Azzurra found themselves too engaged in private battles and consequently making too many tacks. Second race they tacked clear early, and focused on sailing clear and clean in their own lane and let their obvious boat speed do the work for them to lead all the way around the course.

Olympic champion Santi Lange picking the better side of the course helped, but theirs was a measured risk. They did not push to the corner and this time made a priority of staying clear of other boats. The Argentinian tactician who joined the team last year has shown an increasing confidence at a venue that is new to the 52 SUPER SERIES and is proving hard to read because the breeze changes often but with no obvious pattern or phase. And Lange cannot attribute any of their success here, so far, to prior knowledge. He won a bronze at the Tornado Worlds here in 2003 but smiles that he “cannot remember a single race”.

“It’s a really good venue – very tricky. The trickiness is because it’s oscillating winds, but not normal oscillating, sometimes it stays on one side for the whole beat, and next time the other side the whole beat, so it’s really difficult to get into phase and on top of that, you have really good lines, but suddenly you tack in a good lane and suddenly you’ve caught up a lot of metres. And it’s very hard to read on the water so it’s very tough to get in the rhythm of the wind in terms of oscillation and finding a good place to go.”

After six races, Azzzura lead by one single point ahead of the new Bronenosec. Both of the top teams won one race and partnered their victory with a fifth. Top scoring boat of the day was Ergin Imre’s Provezza, which bounced back from a bogey 7,7 yesterday to go 2,2.

“There is a great confidence in the camp. The guys are really enjoying the sailing and when you have a bad day like yesterday we don’t over analyse it,” said Provezza’s Guy Baron on live 52 SUPER SERIES TV today.

Similarly, there is no shortage of smiles in the Bronenosec camp, even if they dropped a place on the last run of the last race. But for that they would have been on equal points with Azzurra. Croatia’s young Olympic champion Sime Fantela, on the helm, is adding a new dynamic to a team rammed full of experience. Their new Botin-designed boat, the third from the Quantum-Alegre mould, is immaculately prepared and clearly quick.

“We feel great, with the consistency especially,” says Fantela. “That’s the most important thing for us. We’re a new team this year in the circuit, first regatta in Mahón, and we are getting better, more synchronised, quicker on the race course. We are happy to race in good conditions. It’s beautiful here and it’s not a one-sided course so there are plenty of opportunities – to win, and to lose – like the last downwind in the last race, we thought we were strong and a gust appeared underneath us and we lost a place right at the end.”

He is bringing some new ideas:

“I’m trying to help the guys with some feelings from the dinghies… though sometimes I am pushing too much – with the squash [after the roll tack/gybe], with the sail trimming, with the pumping downwind on the waves… we have a way to go but they are listening, even though they are older guys with plenty of experience in their shoes!”

Meantime the 2018 defending champions Quantum Racing are struggling here, lying seventh of eight. When usually they might be expected to chip away and take places to convert from a poor position, but here they have been unable to.

“There are some issues and problems we are having, which we have to work through,” Ed Reynolds, the Quantum Racing director explains. “We kind of expected these things to happen but we kind of came out of PalmaVela and thought, ‘this is going to work’ and so a little bit of that has reared its head here, one thing is it is a tribute to the fleet. I have seen all the articles and we have seven new people this year. And if you look at the resumés of the guys in this team. They are solid strong sailors, this is a great team. It’s a couple of things: that communication, that instantaneous thing of really being able to feed off each other, we don’t have it right now; and this venue is tricky – but… we are going really fast. I did the RC44s in Sotogrande about three or four years ago and it was the same thing. It is not an excuse, that is a reality here. And a lot of the things we have done as a team, conservative, risk vs reward, it is not working here. And we are exasperating our problems by trying to compensate for it part way through the race when it is too late. We will sort it out.” 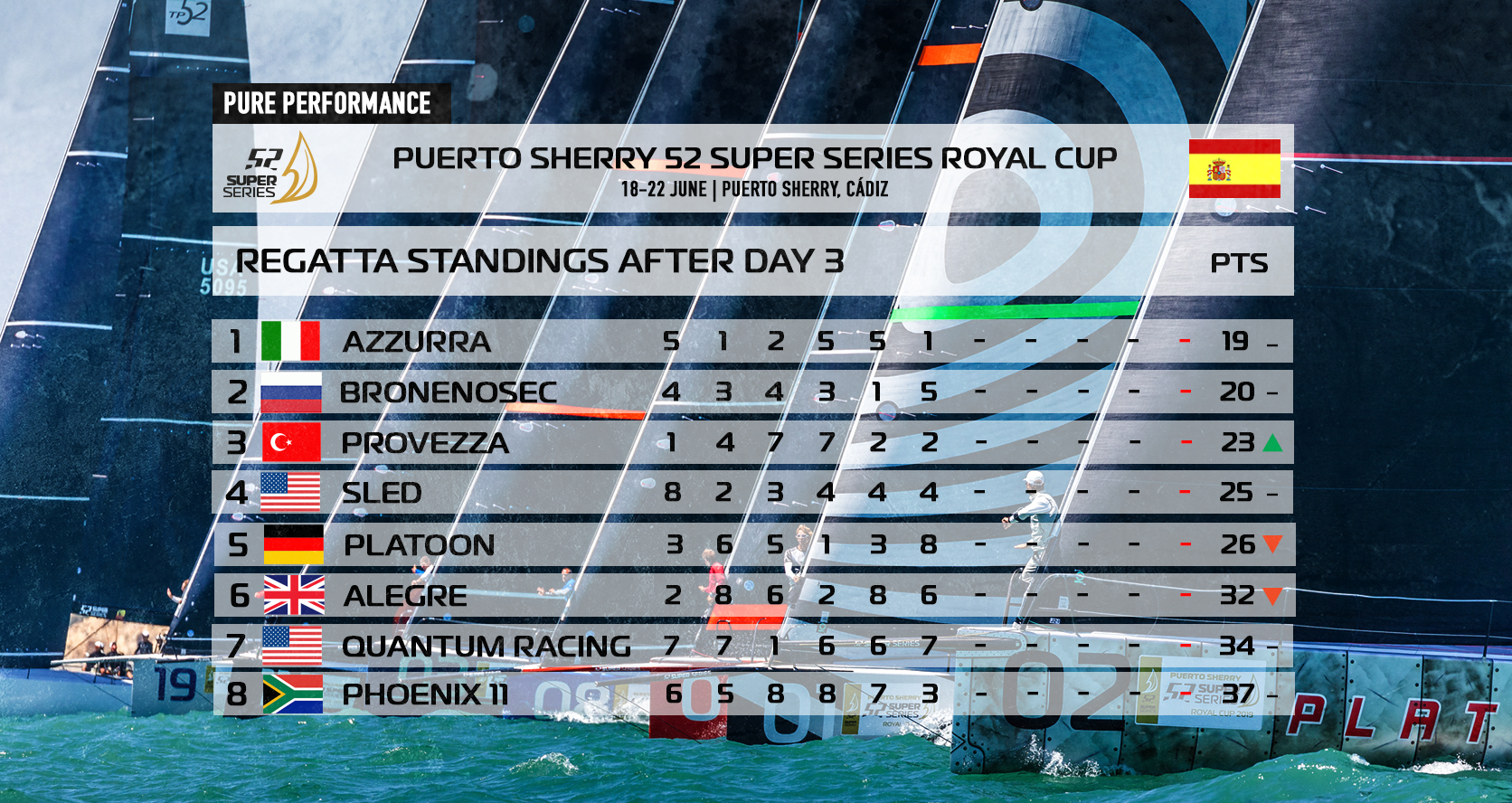