It is official practice day for the Audi Sardinia Cup, the second event of the 52 Super Series. With six teams entered for this regatta which as such a storied history, one TP52 and one Soto 40 apiece, there is more at stake than just the 52 Super Series points. 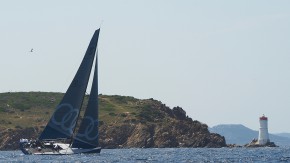 At the Yacht Club Costa Smeralda this morning the winds have been blowing quite hard all morning, and the forecast is for a breezy afternoon from the Mistral direction.

Some of the 52 Super Series teams took the chance to use their allocated practice days Sunday and Monday to put in some hours on the water, fine tuning and informal racing in great conditions. Feedback from the teams who were out just confirms that nothing has really changed since Barcelona last month, the top teams are very finely balanced.

Downwind, the universal opinion is that RÁN are a little quicker, while the Botin boats – that is the new Audi Azzurra Sailing Team and the world champions Quantum Racing are even, and slightly quicker than RÁN upwind. 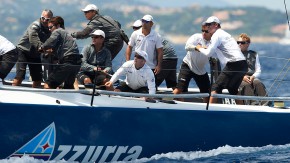 New to the 52 Super Series are PowerPlay(CAY) and Paprec (FRA). PowerPlay is expected to be well up to speed having already raced in the fleet at Key West where they finished second to Quantum Racing and at the Rolex regatta in St Barths where they won.

The weather outlook promises variety and that can only be good. As well as everything else there is to love about the Yacht Club Costa Smeralda, the race waters and the attendant winds are well known for providing a range of different conditions over the course of a regatta. This one finishes Sunday after a diet of windward-leeward races and one coastal race Friday.

I think we are probably going to have a pretty windy practice race in this Mistral direction. Thursday we will see a bit of a change and then in the latter half of the week we will see SE’ly and E’ly breezes, so it can be a regatta split into two or three sections.

It will depend which direction the wind has been blowing from and for how long, maybe we see some wind blown current, in the NE we can see it quite. We did the Melges 32 world here and in 2009 the Maxi worlds and both were quite choppy. The good thing about this venue is that every direction brings something a bit different. We tend to think the last regatta was all from the one quadrant, S’ly, really, whereas here you get a big of everything. You have the mountains, the straits and these have a real effect.

I think we know that PowerPlay is a very strong downwind boat, it was when Oracle had it and since and I think they have done three or four regattas already. I think they will be good. The French are a bit of an unknown quantity but the Destremau brothers are pretty talented sailors, and we will see how they have optimised what was always quite a quick boat. Gladiator is good in the light to medium airs, pretty potent and I am sure the Botin boats have been putting a lot of effort into optimising to be as fast as they can both upwind and downwind, just as we have. We have done a few tweaks for here on what we need to work on.
Adrian Stead (GBR) tactician RÁN (SWE)