(Wednesday 8th March, Miami) – Azzurra may have had to wait until the second day of the Miami Royal Cup, the second event of the 52 SUPER SERIES season, to score their first race wins of 2017, but two well earned victories off Miami Beach Wednesday sees the Roemmers family team step eight points clear of Platoon at the top of the regatta standings.

The crew that sails for the Yacht Club Costa Smeralda’s perfect pair of wins reflect excellent crew work, good starts and speed in the choppy seas and SE’ly winds, which seemed to be changing all the time in terms of strength and direction. Tactician Vasco Vascotto was on top of his game, winning off the pin end of the line and gaining early on the left of the first race then completing a thrilling come from behind second win only on the final quarter of the last run of the day. 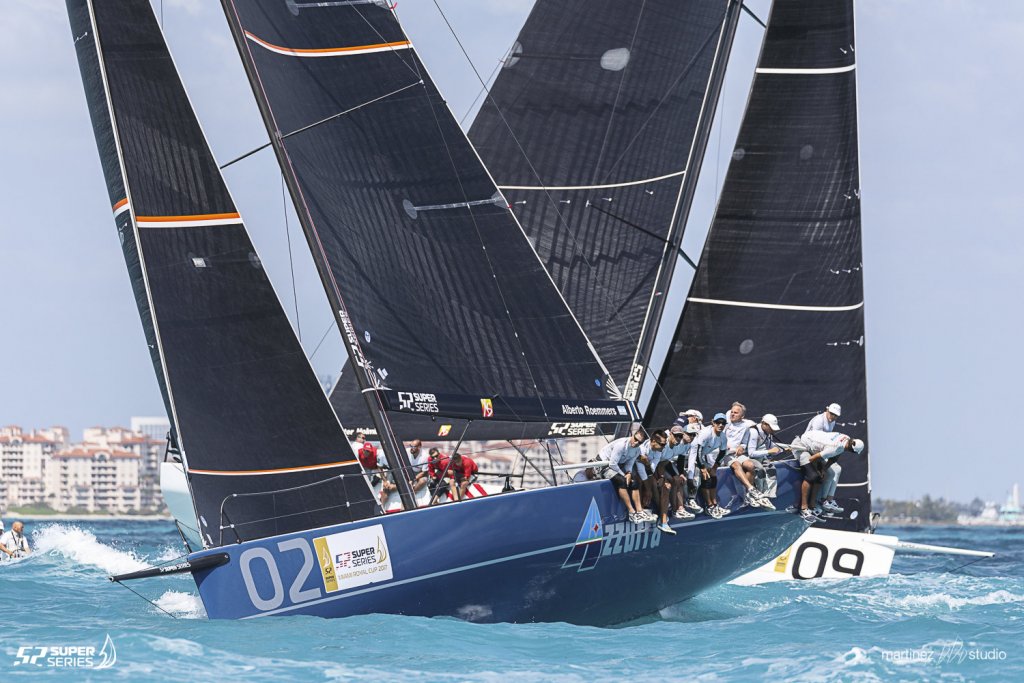 “We are happy because we have recovered our upwind speed so that gives us confidence to do whatever we need to do on the racecourse, now able to trust that the speed will be working for us. I think it’s a positive day, especially for that. We had two clean starts, Vasco made some very good choices and the crew did its work properly. All in all, everything clicked and it’s one of those races you need to enjoy because tomorrow we start again and it can easily go the other way. So we need to celebrate, but only for a little while, because glory doesn’t last forever.”

After starting the day level on points with Azzurra, Harm Müller-Spreer’s Platoon are now second while a solid 3,4 day for Ergin Imre’s Provezza sees the Turkish-flagged team leapfrog Quantum Racing, who did not start so well and scored a sixth and seventh. 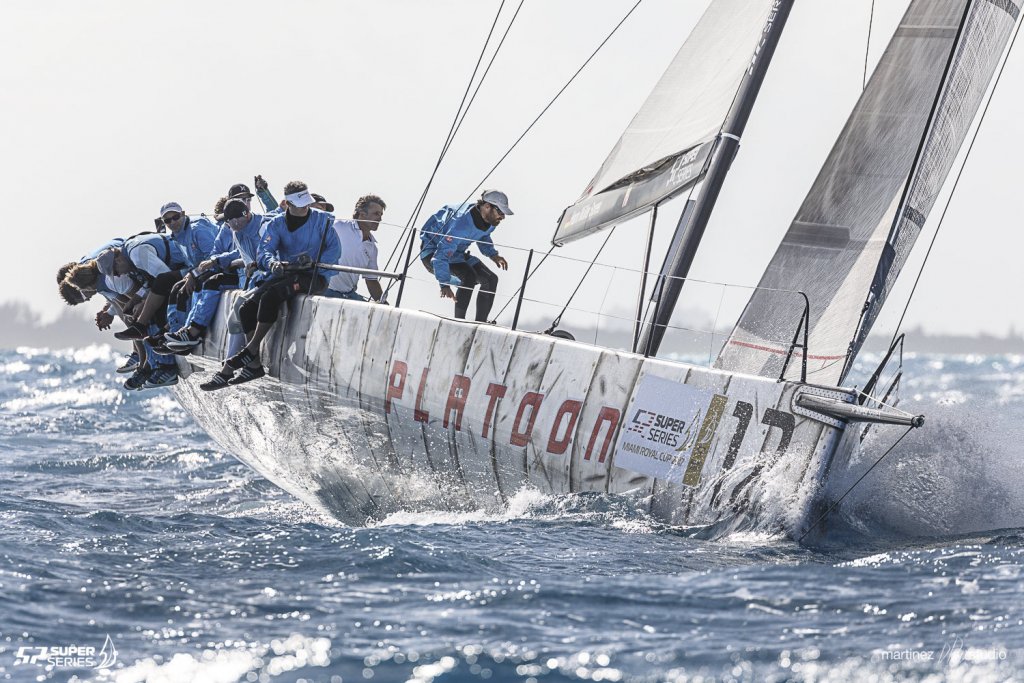 Race 3: Azzurra Goes Wire to Wire for First Win of 2017
The Italian/Argentine combination of owner Alberto Roemmers Jr., helmsman Guillermo Parada and tactician Vasco Vascotto on Azzurra came out blazing in Race 3, winning the pin end and earning the early advantage on the left side of the first upwind leg. Following closely on their heels was Provezza, who rounded second. Bronenosec, who started closer to the committee boat, was able to work the top left of the first beat and gain a slight edge over a pack of boats in contention for third place. Day 1 leaders Platoon, and series leader Quantum Racing both struggled off the starting line and rounded in the bottom half of the fleet.

Azzurra tried in vain to break away from the group, building its lead to as much as 150 meters at times. But in the shifty, puffy conditions — the breeze and sea state both noticeably reduced from Tuesday — there were opportunities aplenty, chances to surge forward and threaten the overall lead.

Around the final windward mark, Azzurra had a solid lead on Bronenosec, with Sled, Rán Racing and Provezza rounding out the top five. But Bronenosec, helmed by Vladimir Liubomirov, fought all the way down the run, closing the gap and at times appearing to take the lead.

The Azzurra crew kept their composure and won the race by a scant 4 seconds over Bronenosec, identical margins to Day 1’s slender margins. Provezza moved up to third at the finish with Rán Racing in fourth and Sled taking fifth. 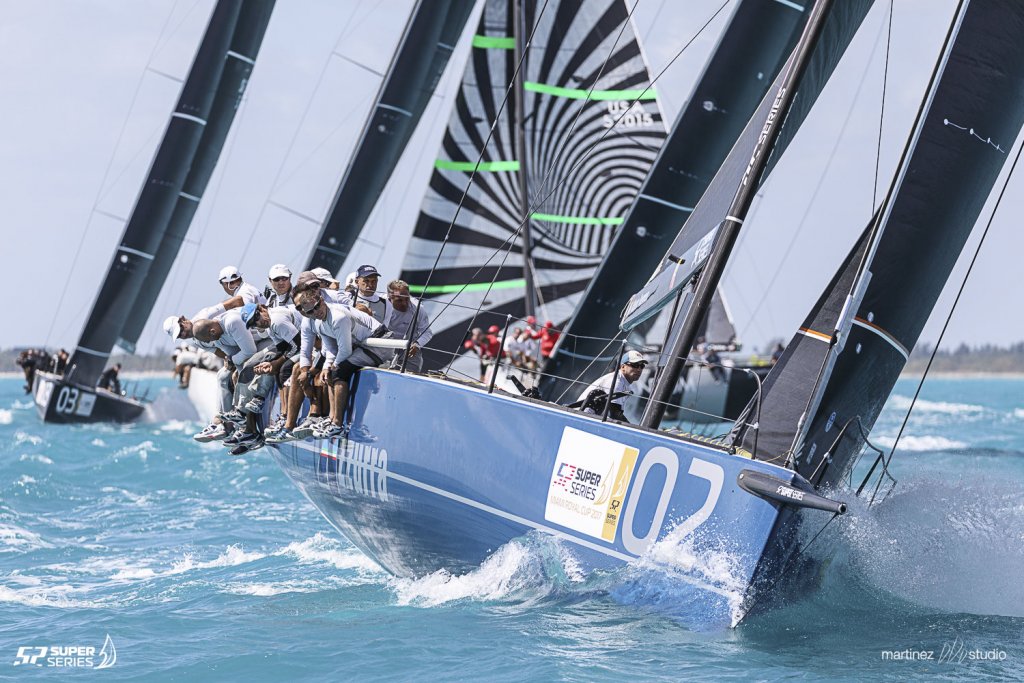 Race 4: Seemingly Untouchable Azzurra Step Clear
When Vasco Vascotto is hot, the fiery Italian tactician for the Azzurra team can seem at one with the wind; and he’s nearly impossible to beat. The Azzurra team seemed to have every base covered, right side, left side, middle—and in every position from first to last. But when it came to the finish line, it was Azzurra taking the gun, their second back to back win, and a commanding 8-point lead in the overall standings after four of 10 scheduled races.

Azzurra had another great start at the pin end of the line and after less than a minute of sailing was able to tack and cross the fleet. But halfway up the beat, with the left side seemingly winning out, Vascotto had second thoughts. He tacked back to the left, leaving Alegre and Rán Racing, both of whom had second-row starts, all alone on the right side. Those two boats, in that order, led around the first mark with Bronenosec in third and Azzurra fourth.

The Italian/Argentinian team jibe set, but the right side of the course, looking upwind, wasn’t profitable on the run and halfway through that second leg Azzurra was mired in last, 300 meters or more behind the lead group. Alegre and Rán Racing led through the gate, followed by Provezza, Sled and Platoon.

It was on the second lap where Vascotto worked his Miami magic, picking his way through the fleet, rounding the final windward mark in third and then nailing the last quarter of the run to take the win. Platoon also rebounded from an eighth in the day’s first race and deep in the fleet of the second race to take second. Rán Racing was third and Provezza continued their steady sailing to finish fourth. Alegre was fifth while Sled, in position for a top five finish, dropped to ninth after being whistled for a foul just meters from the finish.

Working round the clock through Tuesday night and all the way through Wednesday seems set to pay off for the Gladiator team. After their new boat was badly damaged in a collision on Tuesday their industrious shore team and crew had their substitute boat – their 2015 red Gladiator – re-rigged and ready for delivery to Miami from West Palm Beach, aiming to be ready to resume racing Thursday. They will be granted redress for the races missed.

“In the second race we had a very good start we were able to tack and cross ahead of the fleet, but then we were stuck a little in the middle of the course and we got passed from the right and from the left. Then we caught a fishing buoy close to the top mark also that made our lives a little bit difficult again. On the first run, we chose the left, that didn’t pay a lot, but then out of the gate we were able to hold into a very dirty lane behind Platoon because we were on a very big lift and we were able to hold there for three minutes and that was enough to grab the header and cross and position ourselves properly. We were lucky that it worked out.

Vasco and Cole [Parada] did a very good job today, very smart reading of the puffs and the shifts. It was always a compromise between wind pressure and wind shifts and I think overall we did it pretty good.”

About those first wins of the season for Azzurra?

“A couple of times we were missing those five meters, so it’s good to have two of them straight away to begin [the regatta] with a nice scoreboard. Miami is very special because it’s very challenging not only for the wind; it’s the Gulf Stream, and with the tide here it’s a different timing on the start. So you need to pay attention to many, many things. But so far so good and now today the sun is out so we hopefully enjoy it a lot from now on.”

“We were all expecting a little stronger breeze. It was in the lightest part of the range that we were expecting and then it was super, super inconsistent. It was right, it was left, big up, big down, suddenly you have two more knots of pressure. So it was a very tricky day to make decisions and decide where to go. I think that Tony Rey on our boat was super inspired today. It was very difficult to see because here you have a lot of different color on the water because you have the clouds making shadows and you have the water coming out of Miami is like one color and the offshore water is another one. It’s a bit confusing, so it’s very difficult to call the puffs and to see the pressure in a consistent way. We are very happy (with results so far). It was a shame yesterday, one race we were leading at 400 meters from the end and we lost two places. But this is the fleet; today it was the opposite way. We were sixth at 200 meters from the end and we ended up fourth. We are very very happy with the way we are starting and the boat is performing well and the team is very cool and everything seems like all the pieces have come into place and everything is looking good.”

“To be honest our first race was—I don’t want to say lucky—but we pushed a corner twice, twice we go into the right corner. When you do something so extreme a little bit of luck is part of the game. Of course, it happens because the crew is doing a very good job, a perfect job so you get around the marks well, so where you go is a piece of the whole result. In the second one we push a corner again and it was the wrong one. It’s part of the game. Today was quite typical here. For many reasons—big buildings and heating inside and blah, blah, blah—it’s very shifty. And the shifts are in terms of direction, strength and quite often only on the top of the rig so you see the shift on the instruments but in the end it’s not a real shift, it’s more shear, so this makes everything more complicated. It’s part of racing here.”