Quantum Racing, with owner Doug DeVos on the helm, emerge from the first day of the new 52 SUPER SERIES season with the overall lead at Quantum Key West 2013 thanks to a well executed victory in the second of two windward-leeward races sailed for the six boat 52 class. 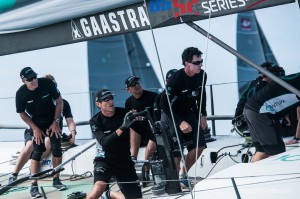 They were never passed at any point during the second race, leading from the first windward turn of the five legs contest to the finish, to partner their win to a modest fourth place which they rescued from what had looked earlier like a pretty lacklustre Race 1. Skipper Ed Baird commented:

I am very excited for Doug DeVos, he is always asking us what he can do better. We are trying to ask the same questions of ourselves, but I think that is the light weather day and it will be different from here on. We will see how it goes. But it was a beautiful day on the water.
Ed Baird, Skipper, Quantum Racing

If their fourth and first places reflect something of an up and down opening day for the team which finished second overall on the 2012 52 SUPER SERIES and are twice past MedCup and World Champions, in fact it was the defending champions Azzurra whose results proved more extreme.

The Yacht Club Costa Smeralda team lead by skipper-helm Guillermo Parada looked to have seamlessly returned to winning ways when they nailed a perfect start and chose the favoured left side of the upwind leg first. At the windward mark they lead Tony Langley’s Gladiator and stayed ahead to take the first winning gun of the season. But in the second race Azzurra mistimed their starting move when they tried to tack underneath and slow Quantum Racing. They ended up squeezed between Quantum Racing and Rio and so were forced away. But it was within metres of the windward mark that their problems really started. Azzurra were nearly halted. when they hooked a lobster pot line. It took two attempts with a crewman, David Vera, going off the bow and all the way under the boat to clear the offending line. Even so it was slickly undertaken, reflecting a contingency they had practiced as a team only a few days ago. Azurra dropped to sixth, losing between four and five hundred metres. They were unable to improve from there, but still finish their first day with a share of third place overall. 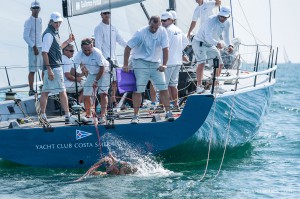 We lost about 400 metres to everybody and from there is was very difficult to come back. This is the way of class, sometimes you win sometimes you lose. But tonight we have risotto with lobster, very good, very Italian.

The first race was just perfect though, good crew work, good wind shifts, Guillermo drove the boat very well and so overall we know that we have the possibility to win races. But we need to stay away from trouble, to start clean, away from lobster pots, stay away from crazy stuff and we are confident tomorrow we make a better job.
Vasco Vascotto, tactician, Azzurra

While Quantum Racing’s first and fourth ensures they lead only on tiebreak, Tony Langley’s Gladiator team sailed a very astute and smooth opening day. With Chris Larson calling tactics, Gladiator were impressive in the way they stayed out of trouble, but equally they were nicely placed to take every opportunity which came their way. When there threatened to be a little mix up at the first mark of the second race with Interlodge and Azzurra opening the door slightly, Gladiator was smartly into third place which they held to the finish.

Langley may pay tribute to new trimmer Ross Halcrow and a new keel as part of their renewed competitive edge, but the owner-driver did a nice job of keeping the boat moving in the slightly streaky, 6-9kts of NW’ly breezes.

As ever there is nothing much separating the fleet after two races. Quantum Racing and Gladiator share he same five points aggregate whilst three boats Azzurra, RÁN and Interlodge, all have seven points. After a light winds pair of opening races, breezes at Quantum Key West 2013 are expected to build for Tuesday and Wednesday.

We are pleased with Day 1 we have made some gains from the changes that we have made. We have a new keel and we have Ross Halcrow trimming who is as good as it gets. The breeze was a little bit streaky but when you have trimmers of that quality they make you look good. It is my first time here and I am loving it.
Tony Langley (GBR) owner-helm Gladiator (GBR)

We did not show our best effort in the first, light airs race. The first start was not great but we thought it was more even on the course and that the right was not going to be as bad a place to be. And early it wasn’t, we were gaining a little to start and then it all fell apart and the left was the place to be but by the time we got across it was too late. That was the way it was going to go. The second race Andy Horton did a great job feeding me information what was happening medium term with the breeze. And we were able to play to that from there. Azzurra chose to come and start alongside and they were just a little bit late and really we were just rumbling along, they tried to tack underneath us and it was just a little too late to do that. They left us with a little space, they were a little pinned down by Gladiator so they did not really have a lot of choice in what happened.

I am very excited for Doug DeVos, he is always asking us what he can do better. We are trying to ask the same questions of ourselves, but I think that is the light weather day and it will be different from here on. We will see how it goes. But it was a beautiful day.
Ed Baird (USA), skipper-tactician Quantum Racing (USA)

The first race was good the second very bad. Unfortunately we were not in a position to take the first shift but still at the top mark we were close to the top boats but unfortunately as we hoisted the kite five seconds later we had caught some lobster buoys. It was difficult but we made a good manoeuvre to get downwind and drop the spinnaker a bit and get a man in the water, we did not see the line the first time we went in the water and so we needed to go back in the water again. And so we lost about 400 metres to everybody and from there is was very difficult to come back. This is the way of class, sometimes you win sometimes you lose. But tonight we have risotto with lobster, very good, very Italian.

The first race was just perfect though, good crew work, good wind shifts, Guillermo drove the boat very well and so overall we know that we have the possibility to win races. But we need to stay away from trouble, to start clean, away from lobster pots, stay away from crazy stuff and we are confident tomorrow we make a better job.
Vasco Vascotto (ITA), tactician Azzurra (ITA)

It was a tricky day. We put ourselves a bit behind off the start line on the first race and we did not get back into it. The second race was better we did not quite manage to lead Quantum at the windward mark. There was potential to do that but we did not just get bow forward on them enough to do so and they just managed to stop us from tacking at the mark and then they lead us all the way around. We are pleased to get that second. We have a few things to work on after the first race. We needed to be bit more prepared for the start. Overall for us there were some opportunities missed today. But it just goes to show, we did not need much more to have equalled Quantum as boat of the day.
Adrian Stead (GBR) tactician RÁN (SWE)

We had a great start in the first race, and felt really good lined up with everyone in the first beat of that race. Gladiator just got around us at the top mark, and they pushed the mark sideways, but when I shot up to miss it, the transom swung and hit the mark. So, we did our turn, but it didn’t hurt us too badly. We have been used to racing around other boats of different sizes, so it’s taking awhile to get used to being in a pack like this close to the other boats. But its really great, and we’re looking forward to learning every day. For the second race we were in a debrief and didn’t realize the sequence had started, so we were a little caught out and didn’t have a good start. After that there were not many opportunities to then get back at the leaders.
Manouch Moshayedi (USA) owner-helm Rio

We are super happy with the day, our first in the SuperSeries, and never having mixed it up with these guys before I think we did really well. Austin did a great job off the start line, especially in the first race where things fell into place nicely [and we boxed out Quantum at the boat end]. The boat is really fast, and we held our own in the corners, so we feel really confident going into the rest of this week.
Kris Matthews (USA), Bowman and Boat Captain, Interlodge (USA)